“Right to life, your name’s a lie! You don’t care if women die!” Those words are being chanted by pro-choice activists throughout the country against reactionaries hell-bent on eradicating legal abortions. A slogan of the 1970s movement to legalize this basic right, it is being chanted today as the people’s fightback mounts against the intensified, dangerous attack on reproductive rights and health care.

Mass movement in the streets pressured the Supreme Court to legalize abortion in 1973 in Roe v. Wade. It will take a multinational, multigender, multigenerational and multi-organizational mass struggle to push back today’s right-wing offensive. 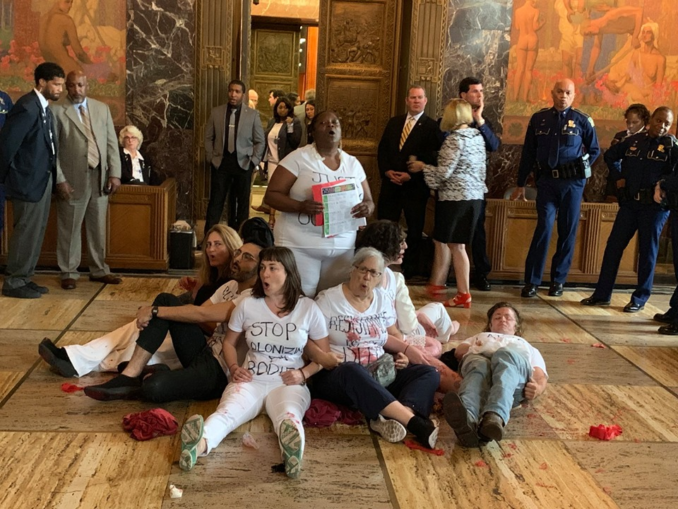 Since the Roe decision, conservatives have tried everything to hack away at and overturn it through state legislatures and courts. Decades of concerted attacks by reactionary forces have included murders, injuries, stalking and harassment of doctors, staff and clients. Bombings and arson attacks have destroyed clinics. Racism, misogyny, anti-poor and anti-LGBTQ bigotry underlie their movement.

The current race to severely restrict or ban abortions was spurred on by Brett Kavanaugh’s Supreme Court appointment in 2018, bringing to five the number of conservative justices. The right-wing’s goal is for the court to overturn Roe and criminalize abortions, empowering states to prosecute and imprison those who have the procedures and/or medical providers.

In preemptive actions, some states, such as New York, Virginia, Kansas and Oregon have passed laws protecting abortion rights. Similar laws are being taken up in Vermont, Rhode Island and other states.

Thirty states have passed restrictive laws, including current outright abortion bans. These will harm women, especially those of color, poor, young, gender-oppressed people, workers, immigrants, the disabled, rural residents and domestic abuse survivors. Those with economic means will be able to travel out of state to access abortions, as they did in the past.

Twenty-five white Republican men voted for an Alabama abortion ban that will have racist impact. State Sen. Linda Coleman-Madison is one of four African-American senators who vehemently argued against it.  She asked male senators if they had been raped or were victims of incest, since they were banning abortions for victims of these violent acts. Of course, they said no.

Some 32,000 pregnancies result annually from rape in the U.S. Can you imagine the psychological damage to a person who must carry such a pregnancy to term and the desperate acts they might commit to end it?

Prior to legalization, circumstances were dire for the many thousands of women who annually had botched underground or self-induced abortions. Hospital emergency rooms were filled with those who suffered injuries and infections. Thousands of women died. More will die, if these misogynists have their way.

Abortions have always occurred. Legalizing the procedures meant they were performed in sanitary conditions by medical professionals. This was a huge breakthrough, as pregnant people had a safe way to obtain them.

As states have restricted access to the procedure and forced abortion-providing clinics to close, pregnant individuals have resorted to desperate measures. Some states have already imprisoned women, particularly immigrants and women of color, for self-abortions or “endangering fetuses.” Even miscarriages are suspect.

When right-wing politicians claim to be “pro-life,” they are more than hypocritical. They would deny pregnant people safe medical care, sending many to turn to harmful abortion methods. More unintended pregnancies will occur, with little to no government support for parents or children.

Where is the purported concern for children’s lives? Sen. Coleman-Madison criticized Alabama’s government for already not providing adequate care for children or support services for low-income mothers, such as child care. She added an amendment to the abortion ban that would require the state to provide free prenatal care to women denied abortions and health care for their children up to age 13. The conservative white male majority struck it down.

Neither Georgia nor Alabama has expanded Medicaid under the Affordable Care Act. Alabama has the country’s second-highest infant mortality rate, while Georgia ranks seventh. Georgia has the highest rate of maternal mortality and the largest number of cervical cancer deaths — which disproportionately impact Black women. Alabama also rates high in number of  pregnancy-related deaths.

‘They say get back!’

Protests against these vile laws have taken place around the country, especially in Midwestern and Southern states where reproductive rights are under the severest attack. Momentum is building.

Activists from the Western New York Resistance Revival Chorus, Western New York Peace Center, New York Abortion Access Fund and Workers World Party gathered May 14 in Bidwell Park in Buffalo, N.Y.  They were there in solidarity with people affected by the anti-abortion laws passed in Alabama and other states.

Over the decades, Buffalo has been the site of massive mobilizations to stop right-wing attacks on abortion access. Dr. Barnett Slepian was fatally shot there by an anti-abortion fanatic in 1998.

Rally speakers pointed out that laws criminalizing those who have and those who provide abortions are a way to disenfranchise poor people and generate more prison labor. The rally drew support from commuters and passersby — some of whom joined in.

Gov. Brian Kemp of Georgia signed a “heartbeat bill” on May 7, the first of what would become a wave of anti-abortion legislation across the South. In Atlanta, protesters congregated outside the Capitol minutes later and vowed to challenge the law. Jalessah Jackson, Georgia Coordinator for SisterSong, denounced it: “It is about controlling the decisions of low-income women and women of color and denying us the agency in our own reproductive lives.” (SisterSong Facebook)

This bill bans anyone who has a uterus from seeking an abortion after the sixth week of pregnancy — when many people do not even know they are pregnant. This bill would criminalize those who go out of state to seek abortions and those who assist them. There is speculation that those who suffer from miscarriages could face prison time if the state proves they caused their miscarriages.

This anti-abortion law, along with others signed in Missouri, Kentucky, Ohio, Mississippi and Louisiana are attacks against working-class women, transgender men and non-binary people. But those impacted are asserting they will not allow these laws to be implemented.

Georgia district attorneys from Fulton, Dekalb, Cobb and Gwinnett counties have said they would not prosecute those who seek abortions.

The Feminist Women’s Health Center in Atlanta, a health clinic that provides services to intersex and trans people, in addition to cisgender women, has reassured supporters that the clinic will continue to provide abortions to all who need  them and fight to ensure that this bill does not go into effect in January 2020.

‘We say fight back!’

Fed up with online petitions and polite lobbying, pro-choice activists took over the Louisiana State Capitol rotunda in Baton Rouge on May 15. Their protest followed state House and Senate committee votes in favor of an abortion ban.

Members of the New Orleans Abortion Fund, Women With a Vision, New Orleans Peoples’ Assembly and the New Orleans Workers Group chanted: “Not the church, not the state! Rich men won’t decide our fate!” They also demanded a hike in the hourly minimum wage, fully funded child care centers, an investigation of Black maternal deaths in Louisiana and an end to mass incarceration.

Ten people were arrested and charged with criminal destruction of property for pouring “blood” on the floor. The groups vowed to send this message: “The time is now to stop business as usual. This is just the beginning.”

Once news of the action hit the news and social media, thousands of messages of support poured in. Significantly, most Louisiana legislators are puppets of the reactionary American Legislative Exchange Council, an arm of the billionaire Koch brothers.

Over 50 organizations, including Planned Parenthood, SisterSong and the Women’s March have called for a National Day of Action to Stop the Bans on May 21. Over 400 demonstrations are planned. The coalition vows to “fight back against this unconstitutional attempt to gut Roe and punish women.” (stopabortionbans.org)