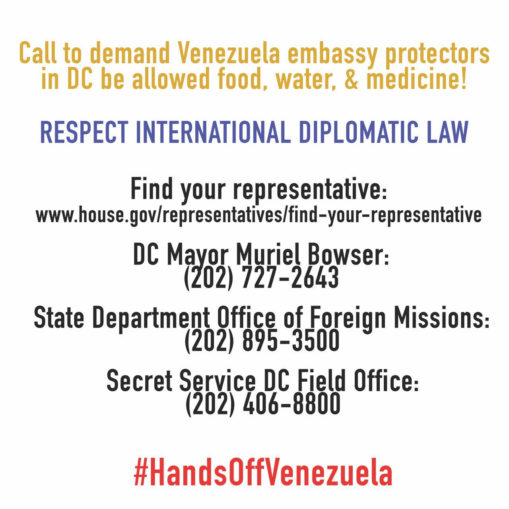 May 4 — Several hundred people answered the call to mobilize anti-imperialist forces at the Venezuelan Embassy today to defend it from increasingly violent right-wing, fascist supporters of the U.S.-backed coup attempts in Venezuela.

CODEPink and ANSWER led the demonstration, which had strong participation from D.C.-area activists, along with others from several East Coast cities. The International Action Center and the No War On Venezuela Campaign helped rally participation and brought signs and chants.

For several weeks, a determined group of Venezuela solidarity activists, known as the Embassy Protection Collective, have steadfastly held control of the embassy. They have done so at the invitation of the legitimate, democratically elected government of Venezuela, led by President Nicolás Maduro, after the Venezuelan staff was forced to leave.

The movement to defend the embassy has repeatedly resisted attempts by U.S. police agencies and right-wing forces gathered outside the embassy to force their eviction. The authorities aim to turn Venezuela’s embassy over to U.S.-backed coup forces.

Beginning on April 30, following the announcement of the coup attempt by U.S. puppet Juan Guaidó in Venezuela and its rapid failure, the Embassy Protectors and other anti-imperialists who gathered to defend the embassy have been besieged by right-wing forces. Anti-war activists resisted the rightists’ attempted use of violence and other means to gain control of the embassy.

The rightists have become increasingly more aggressive throughout the week and have hurled racist, sexist and anti-LGBTQ slurs at the anti-war activists. They have also carried out physical attacks, including trying to storm their way into the embassy, often in the middle of the night. Their belligerence has hampered the delivery of food, medicines and other supplies to the Embassy Protectors.

That the U.S. government allows criminal conduct at the embassy of a sovereign nation is in direct violation of international laws and treaties the U.S. has signed. It also violates Washington, D.C., law; the Embassy Protectors have established their legal residency in the embassy office based on their agreement with the Venezuelan government.

The right wing is carrying out these attacks with a green light from the Secret Service, D.C. police and other state agencies that maintain an ongoing presence at the embassy. The cops violently arrested several of the supporters of the Bolivarian Revolution who have mobilized in the last week to protect the embassy. The right-wing coup supporters, meanwhile, have attacked protesters and defaced the embassy without police interference.

The May 4 demonstration was initially called to take place directly in front of the embassy. As organizers attempted to open a canopy tent to claim space, they were surrounded by right-wing coup supporters, Secret Service, Homeland Security and D.C. police. The coup supporters pushed, shoved and formed a physical barrier, preventing the demonstrators from setting up the canopy. Police arrested two solidarity activists during the altercation.

The cops and Homeland Security had lined up cordons on opposing sides of a narrow street with barricades. This guaranteed the right wing space at the doors of the embassy and kept supporters across the street. Nevertheless, spirited anti-imperialist chants drowned out the opposition for hours.

The active role of the U.S. State Department and its police agencies in this orchestrated siege of the embassy was clear in their totally favored treatment of the reactionary forces. The police agencies ran the show. As has happened during other U.S. wars, the authorities gathered the rightists to do the barking and growling. Then the cops act like they are neutrals. It is a fraud, just as the coup attempt was a fraud.

One of the rightists’ main tactics to frustrate the movement defending the Venezuelan Embassy has been to blast music and high-pitched sirens from  bullhorns and compressed air horns at all hours. When they are close to anti-war demonstrators, they aim these devices directly at their faces. Ear plugs become an essential defense against this continuing assault.

At night, the rightists project powerful lights and strobes at the embassy.

Pockets of anti-imperialist forces were able to establish a presence throughout the afternoon on the grounds of the embassy. Medea Benjamin of CODEPINK used a creative tactic several times to lead a group that linked arms and moved through the mob of coup supporters and onto the grounds circling the embassy building, challenging the opposition’s hold. This tactic boosted the morale of those inside the embassy, who greeted this action with raised fists and solidarity waves out the open windows. Huge banners were hung from the roof.

Anti-imperialist forces here in the U.S. must prepare for a long struggle and do whatever we can to mobilize solidarity on the ground in D.C. and in other cities across the country.

There is an ongoing campaign to call and email the State Department, Secret Service and D.C. government officials to demand they stop collusion with the right wing and allow supplies to be delivered to the embassy.

There will likely be more calls for forces to mobilize to D.C. to bolster the defense of the Venezuelan Embassy in coming days and weeks. Workers World will continue to circulate these appeals. Our movement must do all it can to ensure that the group inside is supported to prevent the embassy from falling to the rightist forces.