Detroit – From March 11 to 13 the United Auto Workers held a “Special Bargaining Convention” in this city. Thousands of delegates from locals all over the country came together to discuss issues pertaining to contract negotiations. 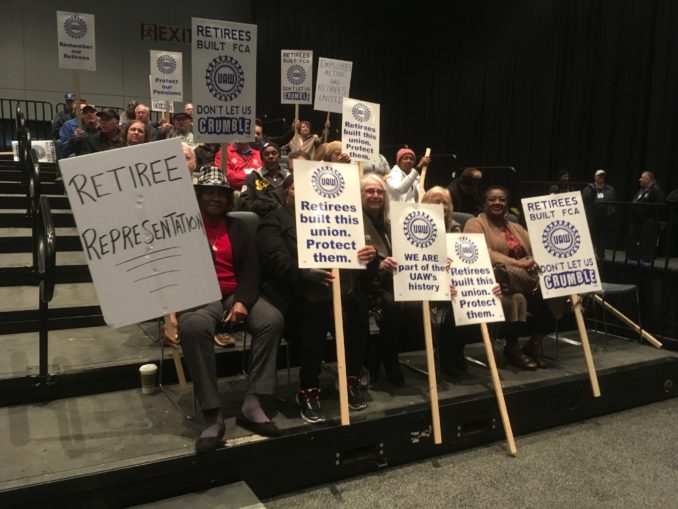 Retirees demonstrated inside and outside the hall

The union, with 430,000 active members, has contracts in a range of sectors, from traditional automotive to academic, health care, other manufacturing, white-collar workers and the public sector. Negotiations for a new contract with General Motors, Ford and Fiat Chrysler Automobiles begin this summer.

While the International Executive Board controlled the order of business, floor comments nevertheless gave voice to a primary concern of the rank and file: eliminating tiered wages and ending the abuse of workers categorized as “temporary.”

A large number of UAW contracts, not only with the Detroit Three auto firms, but in aerospace, agricultural equipment and auto parts suppliers, have allowed companies to pay lower wages to workers hired after a certain date. They work side-by-side with higher-paid workers doing the same work. Often these “second tier” workers have inferior health benefits and pension plans as well.

The current contracts with GM, Ford and FCA have increased the exploitation of “temporary” workers, many of whom have been “temporary” for years. Not only are they paid less in wages and benefits, but they have no seniority and can be readily disciplined or fired. Some delegates correctly called this category “third tier” and insisted we fight for equal pay for equal work.

Pensions, which were not increased for current or future retirees in the 2015-19 automotive contracts, were another issue delegates spoke about. A large group of retirees, including three busloads from Local 12 in Toledo, Ohio, demonstrated outside and inside the convention. Signs told the leadership: “Retirees built FCA. Don’t let us crumble.”

Lacking from the official convention was any real discussion on the fightback strategy needed to force the capitalists to restore many of the gains that have been taken away in recent years. The rank-and-file activist group Autoworker Caravan held its own meeting during the convention titled “Let’s fight to get the contracts we deserve.”

International Secretary-Treasurer Ray Curry reported to the convention that the strike fund was in excellent financial health. The IEB voted to raise weekly strike pay. Now the union needs to take a cue from the education workers around the country and use the strike weapon to challenge the auto bosses.

Martha Grevatt was a delegate to the UAW Convention.