Russell Westbrook is a super-talented guard for the Oklahoma City Thunder and a former most valuable player. On March 11, during a National Basketball Association regular season game between the Oklahoma team and the Utah Jazz in Salt Lake City, Westbrook, who is African American, was verbally assaulted from the stands by a white fan, Shane Keisel, and his white spouse. Both fans were recorded telling Westbrook to “get down on your knees like you’re used to.”

Westbrook’s response was to tell the couple, “I’ll f-ck you up.” (The Undefeated, March 13) Westbrook called their remarks “racial” and “inappropriate.”

Westbrook has since apologized to the spouse, but not to Keisel, who all of a sudden deleted his twitter feed full of racist and xenophobic rants, with Westbrook the main target. Westbrook was fined $25,000 for having an angry exchange with the fan, which is in violation of National Basketball Association regulations. 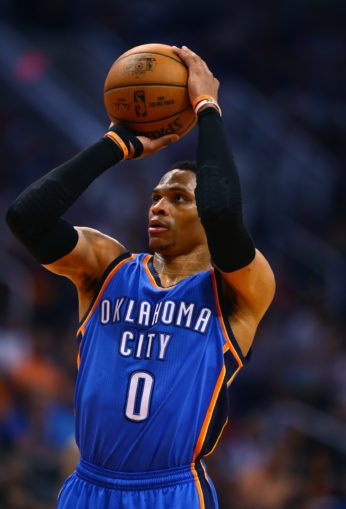 Keisel and his spouse, whose name was not made public, were subsequently banned for life from attending Jazz home games. Footage from a 2018 playoff game between the Thunder and the Jazz resulted in another fan being banned from Jazz games after calling Westbrook “boy.”

The Utah team’s Black players immediately came to Westbrook’s defense, especially center Rudy Gobert, forward Thabo Sefolosha and guard Donovan Mitchell. Mitchell stated, “As a Black man living in a community I love and playing on a team that gives me the opportunity to live out my dreams, this incident hits close to home.  Racism and hate speech hurt us all, and this is not the first time something like this has happened in our arena. The Utah that I have come to love is welcoming and inclusive and [Monday’s] incident is not indicative to our fan base. We don’t want to create a negative environment for our athletes who potentially want to come to Utah.”

Sefolosha posted on Instagram: “I stand 100% with Russell Westbrook on what happened in yesterday’s game. I love our fans but there are limits that cannot be crossed! Support and cheer for your team and enjoy the action, but fans like Shane Keisel, who use that platform to spur their hateful and racist views, need to be held accountable.”

Sefolosha, who is of Black South African descent, had his leg broken two years ago by members of the New York Police Department outside a nightclub.

Current and retired NBA players from other teams have stated that they faced racist taunts from white fans, especially in Salt Lake City. Mahmoud Abdul-Rauf, Draymond Green and Kenyon Martin reported being called the N-word. Abdul-Rauf, a Muslim, was forced out of the NBA when he bowed his head during the playing of the national anthem during the 1990s.

The white owner of the Jazz, Gail Miller, made a pre-game speech on March 14 claiming that Salt Lake City is not a racist community. She said in part: “We believe in treating people with courtesy and respect as human beings. From time to time, individual fans exhibit poor behavior and forget their manners. Some disrespect players on other teams. When that happens, I want to jump up and shout, ‘Stop!’” (deseretnews.com, March 14)

Inequality between fans and players

What happened to Westbrook is a constant reminder that sports reflect U.S. culture, a culture riddled with white supremacist views.  Consider the fact that Earl Lloyd, one of the first African-American players drafted in the NBA in 1950, was accused by a white fan of having a “tail.”

While today close to 75 percent of the players on the NBA’s 30 teams are African-American, the fan base is overwhelmingly white. This reflects both the location of corporate-sponsored arenas in suburban areas and high ticket prices. The Black population in the U.S. still remains a little over 12 percent. (news.gallup.com)

Overall the NBA includes 450 to 500 players. While salaries range from six figures for rookies to eight figures for a handful of superstar players, many fans, especially if they are white, view Black players as well-paid gladiators, open to all kinds of abuse.

Even teams with the worst records make hundreds of millions of dollars in profits for their billionaire owners from television, ticket prices and concession stand revenues during the 82-game regular season. The owners rake in even more if the teams play in the postseason.

Players perceived to be fearless, passionate and uncompromising in their play on the court, like Russell Westbrook, or who take strong political stands, like Abdul-Rauf, can easily become open targets of racist attacks. These include physical assaults, with fans throwing beverages or garbage at them during and after games.

Since the Westbrook incident, more and more NBA players are demanding better respect and treatment by the fans through their union, the National Basketball Players Association.  One proposal, which may be implemented sooner than later, is to play a public service announcement in each NBA arena before each game outlining a code of standards for all fans. If they do not adhere to this code, they will face the consequences of being ejected immediately from games or eventually banned for life.

The president of the association, Michelle Roberts, who is African American, stated, “We should all insist that a zero tolerance policy needs to be implemented at arenas in the face of misconduct by fans. Players don’t have the luxury of being able to unilaterally ban unruly fans from the arenas, a la [New York Knicks owner] James Dolan. The arenas, therefore, have to do a better job of insulating our players.”