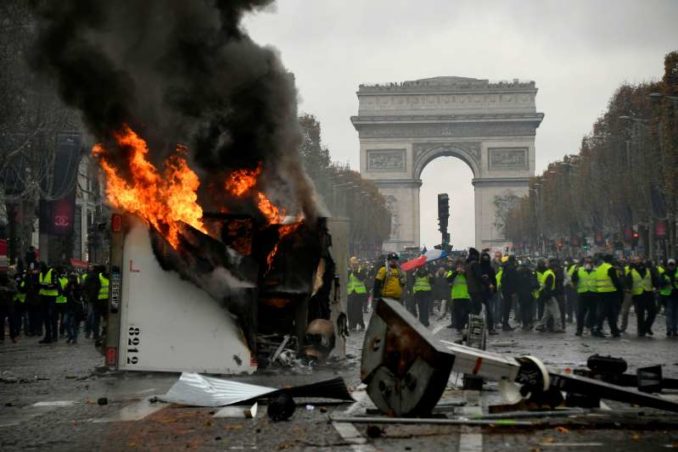 Paris, France — A profoundly new mass mobilization has emerged in recent weeks in France: that of the “yellow vests.” That’s the name and color of the high-visibility jacket that every motorist is supposed to have in their vehicle to use, for their safety, if necessary. It was worn, as a uniform of common struggle, by hundreds of thousands of French people expressing their disapproval of President Emmanuel Macron’s actions.

This is a new mobilization in terms of its origin, scale and forms of popular rebellion. It all started on a small scale at the end of October with a simple citizen petition, without any party or union affiliation, without leaders or organizations, posted on social networks. It called for the cancellation of the fuel tax increase recently approved by the government.

A few days later, nearly a million people had signed it, and slogans were beginning to call to “shut down the country.” This protest movement initially concerned the price of gasoline and the high taxes. It quickly included “the high cost of living,” “low purchasing power” and a “boycott of the big department stores” before it finally focused on one clear slogan: “Macron, resign!”

The common point of these confrontations, which were everywhere in the country, was to express a general malaise, a “fed-up” feeling of the population, and a rejection of the social inequalities caused by the application of Macron’s neoliberal program.

The peak was reached Nov. 17: Some 280,000 yellow vests (according to police figures), scattered over 2,000 rallies throughout France, blocked access to key roads, motorway tolls and supermarkets. Most of the groups were inexperienced and spontaneous in the streets. Many people were taking part in their first political protest. Fewer than 10 percent of the demonstrations were registered with the police force in a district (prefecture), which is the usual procedure. In many villages in rural areas, this was the very first time a demonstration had taken place.

The day’s outcome included one death (an unlucky yellow vest woman was mowed down by a driver who had lost control of her vehicle), nearly 500 were injured, including about 10 seriously (and 93 police officers), and more than 280 were arrested for “acts of violence” (mostly motorists who had broken into the barricades).

In Paris, the action was an indescribable mess that the police were unable to control. A crowd of tens of thousands of yellow vests, extremely heterogeneous and absolutely unclassifiable, was made up of young adults (sometimes with their children), retired people (including grandmothers who had seen their pensions reduced), office employees, workers, artisans, motorcyclists, truckers, taxi drivers, civil servants, medical assistants, high school students, even young business people, veiled women, young people from the cities, rastas, people of all colors and religions, from all walks of life. They all swept, in incredible disorder, along the Champs-Élysées singing the national anthem, La Marseillaise, “Paris, on your feet, rise up” and, of course, “Macron resign!”

Multiple small improvised groups of yellow vests arrived from all over. They were very mobile and managed to make their way through and bypass — without violence — the lines of police and gendarmes, who were overwhelmed on all sides. Barricades were improvised in various parts of the capital, made up of security barriers, wooden pallets, bicycles and everything else that lay around on the road. Garbage cans were set on fire.

Luxury shops in upscale districts preferred to close their doors — although no windows were broken or robberies reported. Here, we read a slogan: “To arms!” (words from the national anthem); there, we could see the banner: “Neither Macron nor fascists, Black Blockage Total” (Total is the French oil multinational which, it seems, did not pay what it owes to the tax authorities.) On another, a drawing of a guillotine, without comment. We could hear: “It is like May 68,” “Angry,” “It is war” or “Macron to the stake.”

Despite the riot control CRS lines, several thousand peaceful but vocal demonstrators managed to enter the street leading to the Elysée Palace before being repelled by the shields, batons and tear gas of the security forces, and finally dispersed. Everyone was stunned — including the yellow vests and police officers. We’ve never seen this before.

The next day, protests continued throughout France, and the day after that, Nov. 19, access to some 20 oil refineries was blocked. On Nov. 20, in Paris, railway tracks from Gare du Nord were invaded and journeys to Roissy Charles-de-Gaulle airport were slowed down.

In almost all regions of France, the people continued to carry out blockades: In Toulouse, around Lyon, Bordeaux, Île-de-France, Vaucluse, Normandy, Brittany,in the north of the country, in Corsica, and as far away as French overseas departments.  On Réunion Island (more than 5,800 miles from Paris in the Indian Ocean) where social inequalities are blatant, protests turned to rioting. The army in Réunion was called upon to repress the rebellion, and a curfew was introduced in the most rebellious towns. On social networks, the yellow vests have already warned: next day of struggle is Nov. 24.

An outstanding actor, with a smile on his face and full of contempt, President Macron seems to ignore this mass uprising, as unprecedented as it is heterogeneous — but he seems motivated and determined to continue the fight. Will he be able to do so for long when surveys reveal that between 75 and 85 percent of the French say they support the yellow vests? For the time being, the President has simply warned that he will be “intractable” in the face of the “chaos” on Réunion Island.

Usually so sure of himself, Prime Minister Édouard Philippe appears on the defensive when he states that “the government will not change course” and “will not tolerate anarchy.” Minister of the Interior Christophe Castaner, for his part, is overplaying his firmness.

Called upon to help, Minister of Ecology and Energy François de Rugy says — no kidding — that the fuel tax should be used to finance the “ecological transition.” For how many euro cents, if France does not have an environmental policy? The anxiety of the government is palpable.

That the right and the far right are trying to co-opt the mobilization of the yellow vests, who have no visible leaders, is obvious and expected. It is just as significant that the mainstream media insidiously insist, in order to discredit the movement and fuel the hostility, on reporting (extremely rare) xenophobic or homophobic statements made during these actions by a few demonstrators (who were immediately stopped by their own friends on the spot).

At a time of savage capitalism and a dominant ideology that stirs up hatred and pits one against the other in an attempt to save the elites, the people who endure and suffer are also the victims of these contradictions. It is precisely the role of militant and enlightened progressives to stand by them in the struggle to show those who are misled the road to solidarity and fellowship.

Should the faces of the exploited always be smiling? Would we insist that the poor people who are fighting for their survival and dignity be photogenic?

Much more worrying is the fact that the leaders of the left-wing parties and trade unions are still — at the present time, and quite broadly — keeping a distance from this popular rebellion. Do they fail to understand that the revolt of the yellow vests opens the current second stage of the French people’s struggles against neoliberal tyranny and for social justice?

Can’t they understand that this is the continuation, in an innovative, combative, lively and extraordinarily broad scale, of the same process of generalization of mobilizations that launched thousands of unionized comrades into strikes and demonstrations last spring?

Do they not see that the yellow vests, in their own way (not without courage, risk and danger), are determined to fill the gaping void left because the institutionalized left for decades now has abandoned the defense of the class interests of all workers and of internationalism toward the peoples of the world? Do they fail to realize that it is the class struggle that makes history?

Fortunately, things can change. And what seems forgotten in the leadership, the bases will take care of reminding them. On Nov. 20, the first transport union announced its support for the yellow vests.

On the evening of Nov. 21, the actions of the electricians and gas companies resumed intensifying (if they had really ceased since June). Several refineries and oil depots (in Gonfreville-L’Orcher and Oudalle near Le Havre, Feyzin in the Lyon suburbs, La Mède near Marseille, but also on other sites, notably those supplying Blagnac (Toulouse) and Saint Exupéry (Lyon) airports) declared themselves on strike.

At the same time, we learned that “captain of industry” Carlos Ghosn, CEO of the French automotive group Renault and chairman of the board of directors of Nissan, was arrested and summoned by the Japanese courts on suspicion of tax fraud and embezzlement of the company’s funds for personal purposes. Is a popular revolt against that world so difficult to understand?