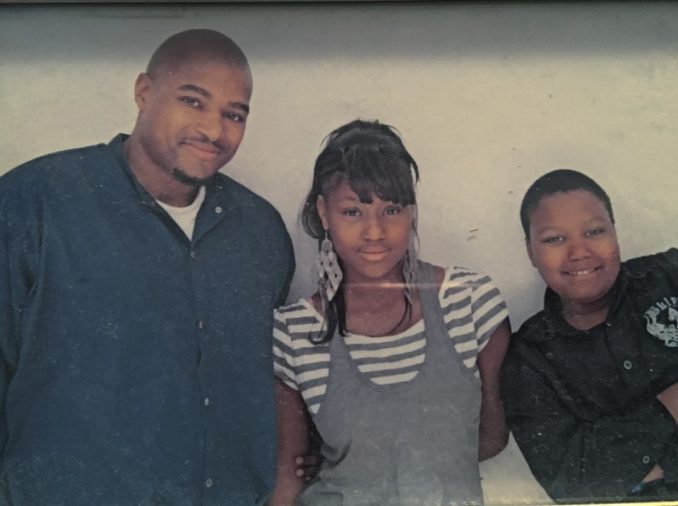 Leroy Jones with his children.

Nevada prisoner Leroy Jones is desperately fighting to clear his name. Regardless of the outcome of his appeals, while he is incarcerated Jones is committed to fighting for exoneration and for others once he is released.

To the surprise of his family and friends in late 2007, Jones was arrested for a series of robberies in Las Vegas, Nev. The father of two, an Air Force veteran and a security technician, he had lived in Las Vegas for about a decade after relocating from Long Beach, Calif.

Jones followed a general path of Black Californians, who in recent decades have relocated to the Silver State inspired by the relative affordability of life in Nevada versus rising unemployment and housing costs in California.

Unfortunately for many African Americans, relocation to Nevada could be characterized as a move from the frying pan into the fire. As historian Annelise Orleck explained in her book “Storming Caesar’s Palace,” an intersectional study of race, gender and poverty in Las Vegas, the state of Nevada has long been known as the Mississippi of the West for Black residents. But with the rise of the myth of “gang migration,” and an upsurge in crime that had been far too easily blamed on California migrants in the 1980s and 1990s, Nevada passed mandatory minimums and sentencing laws targeting documented gang members and people convicted of violent crimes.

Though laws addressing crimes are often called deterrents, the facts reveal these tough-on-crime laws to be a solution to Nevada’s economic problems. With an unemployment rate near 11 percent, over twice the state average, African Americans, according to Prison Policy Initiative, are only 8 percent of Nevada’s population, but they make up nearly 33 percent of its prisoners. They are locked up at a rate over four times that of white and Latinx people and twice that of Native peoples.

Even using Nevada’s uniform crime report, whites make up 54 percent of the state and 83 percent of the people arrested for crimes, but only 44 percent of people sent to prison. The case of Leroy Jones shows how, regardless of facts or lack of evidence, the system in Nevada and beyond is designed to convict all Black people and not let them go.

In two of the three robberies Jones was tried for, video evidence of the robberies was presented in court, but no facial match was ever made. In the third robbery, the prosecution originally proclaimed video evidence showed facial recognition.

In a reversal of the usual court struggle, defendant Jones fought for state’s evidence to be presented and the prosecutor fought against it. The prosecution never presented the evidence that would have cleared Jones. Instead, despite well-documented problems of cross-racial identification, Jones was convicted on witness statements alone.

To many, Jones’ case is flagrant but not even the most egregious. Jones fears that is why his case, and the cases of millions of others, are overlooked by prison reform agencies and advocates.

By comparison, in the 1995 case of Demarlo Berry, he was convicted of murder and robbery despite evidence that the initial description of the robber was a man of 5 feet 10 inches to 6 feet tall and weighing 175 to 200 pounds. At the time of the crime, Berry was about 5 feet 8 inches tall and weighed 140 pounds.

Even when Steven Jackson, a 6-foot, 235-pound inmate in California, confessed to the crimes 10 years later, the Nevada Supreme Court upheld Berry’s conviction. It was not until Berry appealed to the Rocky Mountain Innocence Center that his sentence was finally overturned — 22 years later!

With his case not as high-profiled, Jones’ pleas to the NAACP, the National Action Network, the Innocence Project, the American Civil Liberties Union and Centurion Ministries have either been ignored, or he’s been told that he needs to find new evidence or class action.

Jones knows that for him, and millions like him, what is really needed is collective action to free them. A childhood friend of this author, Jones’ only request to family and friends is to help clear his name. Jones acknowledges the uphill fight against public policy and popular media illusions of objectivity in evidence collection that make people guilty as charged.

For almost three decades, the rising concern over mass incarceration has defined radical politics in the United States. As the U.S. prison population neared one million in the early 1990s, broad collectives ranging from popular academics to grassroots activists began to study what social historian Mike Davis has termed the “prison-industrial complex.”

As Angela Davis notes in her seminal text, “Are Prisons Obsolete?” Mike Davis had noticed that the political and economic power of California’s prison system began to rival the state’s flagship industries of agribusiness and land development. In Nevada, incarceration has generated profits for investors as well as for the system itself, which accrued a half-million dollars in annual profits recently. Last year, the Nevada governor vetoed a bill that would have banned private prisons.

In response to this misapplication of justice, radical anti-prison activists have pushed for prison abolition. Meanwhile, liberal organizations like the Innocence Project fight for the release of individuals like Berry. In other instances, celebrities like Kim Kardashian have lobbied for presidential pardons for compelling individuals, like Alice Marie Johnson.

When asked about those instances, Jones noted that he is “happy that lady got out the joint. She gained some freedom from all this bullshit. I don’t look at other people and say, ‘I wish that was me.’ I am just happy to see someone else benefit. I just hope that one day it would be me.”

To gain that freedom, Jones and the millions behind walls need the trust and support of the masses. Twenty-five years ago, when the Democratic Party helped to pass many of the laws that allowed prison populations to surge, incarcerated voices led the movement of resistance. In 1993 and 1995, protests of federal Black inmates fueled the movement on the streets. It is Jones’ hope that his words will fuel the struggle of those who read them.