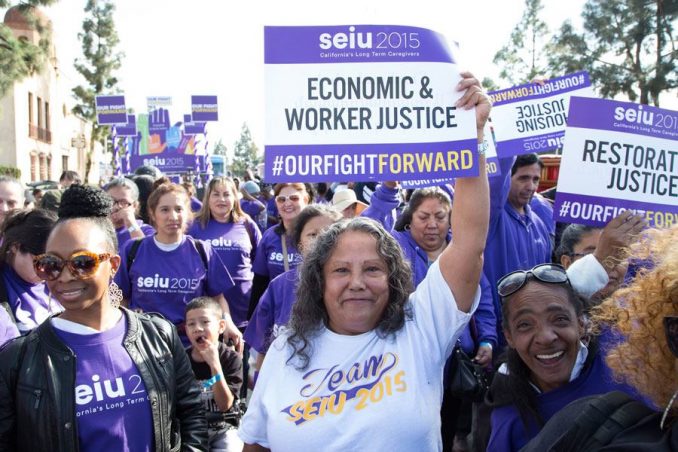 Hundreds of in-home care workers marched through downtown Los Angeles June 26 to the County Board of Supervisors meeting to demand higher wages, at least a $1/hour raise. The day before, the board had approved a $31.4 billion budget without an increase for the 170,000 in-home supportive services (IHSS) workers, mostly older women of color, many of whom are im/migrants. The IHSS caregivers earn $11.18 hourly and provide care — bathing, meals, transportation, tracking medications and household tasks — so that more than 206,000 seniors and people with disabilities can stay in their homes and live as independently as possible.

Large groups of caregivers, members of Service Employees Local 2015, packed the boardroom June 26, wearing vivid purple T-shirts with the union logo. One IHSS worker, who cares for an 84-year-old woman who can’t walk on her own, challenged the board: “I just want to invite you — all the supervisors — to come and work a day in our shoes. Then maybe you’ll realize how much we need that raise.” (mynewsla.com, June 26)

Hundreds of hotel workers and supporters marched through downtown San Diego June 27 over a contract dispute and briefly blocked the driveway entrance of the Marriott Marquis on Harbor Drive. The demonstration was among many UNITE HERE held that day in cities across the country, including Los Angeles, San Francisco and Boston.

Marriott has 44 properties in San Diego County, with more than 11,000 hotel rooms. “We believe they need to set the standard for the best wages, the best benefits, and they don’t,” said Brigette Browning, president of UH Local 30. Contracts have expired or are expiring for workers in the Marriott-owned Westin San Diego Gaslamp Quarter in Horton Plaza, and Local 30 representatives say the two sides are still far apart.

Among the marchers was Karen Betancourt, who has delivered room-service meals at a Marriott for four years. “We love our job,” she said. “We love this property. We just want to make enough money to live here.” Having to work two jobs to make ends meets, Betancourt is paid minimum wage supplemented by tips, but she doesn’t get enough hours to qualify for health insurance.

“What we want is very simple,” said Chris Guerra, who sets up tables at the Westin. “To work just one job and be able to own our houses. If they take care of us, we’ll take care of them.” (San Diego Union-Tribune, June 27)

As part of the Poor People’s Campaign: A National Call for Moral Revival, United Electrical Workers Local 228 members rallied in the New Hampshire state house in Concord on June 11 to demand a living wage and end “the assault on the rights of organized workers.” (The state abolished its minimum wage in 2011.) Members of Local 228, who work at the National Visa Center in the U.S. Department of State, helped occupy the Governor’s Executive Council Chamber and held a People’s Hearing where workers aired their grievances and demanded redress. Local President Bill Ladd testified that the local had been able to boost workers’ earnings substantially since its founding in 2016.

After state troopers announced at 5 p.m. that the building was closed, 10 Local 228 members continued to take testimony. When they refused to leave, they were arrested and charged with criminal trespassing. (Union Victories!!, June 15) But that didn’t stop the local from protesting. On June 28 union members marched with the slogan “Janus won’t stop us.” (Facebook: UE Local 228)

Money for education, not for war, demands Chicago Teachers Union

Delegates in the Chicago Teachers Union unanimously passed a resolution June 6 titled “Unjust Wars of Aggression Leave All Children Behind.” After noting that public schools in working-class communities and communities of color in Chicago and throughout the U.S. “are consistently underfunded” and the federal government could end that underfunding if education were a priority, the resolution states that Trump’s budget increases military funding by $80 billion and describes the many countries like Venezuela where the U.S. has a war agenda. The CTU wants the federal government “to renounce use of a nuclear or other pre-emptive strike on Iran, North Korea or any other country and to prioritize peace and social spending [instead of] military expansion and war-mongering.” The resolution ends by proclaiming that “the Chicago Teachers Union will support and participate in mobilizations and other actions … to stop a ramp-up to war” and will work for quality education for all students.