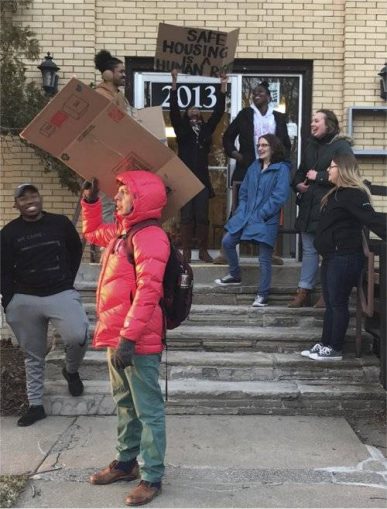 Tenants have faced infestation, mold, collapsed ceilings, no heating in the winter and staff entering apartments without warning. SQL largely rents to international students and people of color. Many are reluctant to come forward or speak out for fear of retaliation.

A group of SQL tenants held two marches, rallies and letters-of-demand deliveries at the SQL company office on April 10 and 24. They were joined by STU and community supporters. During the second protest, tenants directly confronted the SQL owner, Ravi Saluja, and gave an impassioned defense of their right to organize and withhold rent.

Mawupe Avoseh, an Onondaga Community College student and current SQL tenant who co-led the most recent march, said: “Right now, SQL just cares about a check. They will come after students for payments, but won’t respond to a hole in the roof or a leaking ceiling.”

Other participants rallied and picketed nearby, displaying blown-up photos of poor conditions at SQL properties, including rotting animals in ceilings and walls, sewage backups in basements, and collapsed ceilings with mold or exposed nails.

During the actions, other SQL tenants and young people from the surrounding neighborhood have spontaneously joined in as demonstrators marched past their apartments or rallied, chanting.

Low-income students, who cannot choose luxury apartments in the Syracuse University area, end up renting from off-campus slumlords. Tenants from out-of-state are not able to vet the properties in person before moving in. Low-income choices close to the school are vanishing as the largely Black and Brown neighborhoods nearby are being rapidly gentrified.

“In Syracuse, there are not a lot of options for student apartments. It’s unfortunate that affordable housing is also bait for vulnerable students,” Avoseh said.

STU’s first campaign was successful in getting leases voided, full repayment of security deposits and overcharges, and speedier maintenance response times. SQL conceded to those demands shortly after two direct actions on Jan. 23 and Feb. 6.

“What seems to do the trick is collective action,” said Benesemon Simmons, an STU organizer, Ph.D. student at Syracuse University and former SQL tenant. “There are tenants today who are complaining about the same issues that we were complaining about. Some are asking for voided leases. Some are just asking for maintenance repairs.”

“When we banded together and joined our voices together, that’s when things started moving,” said Susima Weerakoon, an STU organizer, graduate student at SU and former SQL tenant. “We got community supporters. We got in contact with other tenants, and we were able to put pressure on SQL to either fix our houses or void our leases so we can live somewhere safer.”

Tenants plan to remain on a rent strike through May, until SQL meets urgent habitability needs or voids their leases.