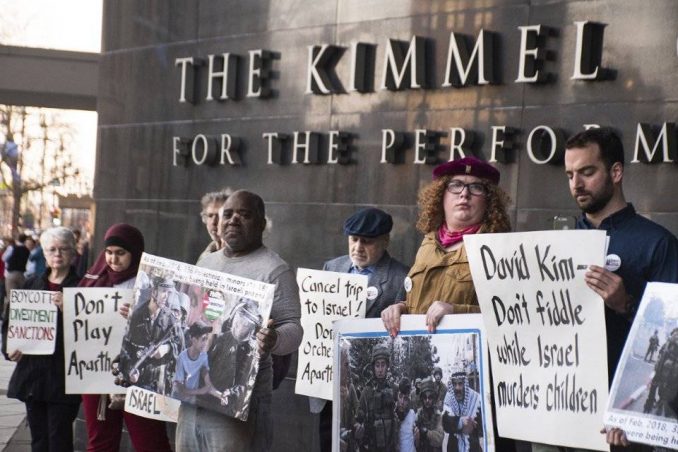 Picket of concert to protest Israel’s murder of Palestinians.

For the second time, demonstrators gathered outside the Kimmel Center in Philadelphia on April 12 to denounce plans by the city’s philharmonic orchestra to tour and perform in Israel this June. This time, people attending an evening concert were greeted with musicians outside playing protest songs while carrying a 40-foot-long scroll showing pictures, with the names and ages, of 31 Palestinians murdered by Israeli snipers just since March 30.

The Philadelphia Don’t Orchestrate Apartheid (PDOA) campaign is calling on the musicians to stop legitimizing Israeli oppression and apartheid against Palestinians. They see the planned tour as part of Brand Israel, the Israeli government’s propaganda strategy to use international artists and athletes to draw attention away from their oppression of Indigenous Palestinians.

The planned tour is especially abhorrent in light of Israeli snipers intentionally murdering and wounding thousands of unarmed Palestinian demonstrators taking part in the Great Return marches in Gaza. “For the Philly orchestra to participate in a foreign government’s propaganda campaign is not okay, particularly when Israel is committing war crimes as we speak,” said PDOA spokesperson Susan Abulhawa.

Other speakers at the demonstration included Abdul-Aliy Muhammad with the Black and Brown Workers Cooperative, Phil Gregory with Workers World Party, University of the Arts student Stephen Davies, Mike Wilson from Philly REAL Justice, and Karima Saab with Philly Boycott, Divestment and Sanctions.

Ted Kelly, who played guitar and sang Bob Dylan’s “Masters of War,” described performing at the Kimmel Center as a young violinist. Kelly noted that the planned trip to Israel would tarnish the image of the city’s music community. “I was 17 when I performed here — the same age as some of those murdered last week in Gaza.” The rally, which included a candlelight vigil, ended with the reading of the names of the Gaza martyrs.

In an indication that PDOA’s campaign is being felt, a day after an April 6 demonstration that denounced the orchestra’s planned meeting with Israeli Minister of Culture and Sports Miri Regev, she was dropped from the itinerary. Regev has made blatantly racist and offensive comments about African asylum seekers, as well as Palestinians.

However, a plan for orchestra members to tour an Israeli military base has been added to the orchestra’s schedule. This move is equally disgusting, considering the Israeli Defense Forces’ mass-scale, intentional shootings of unarmed Palestinians in Gaza.