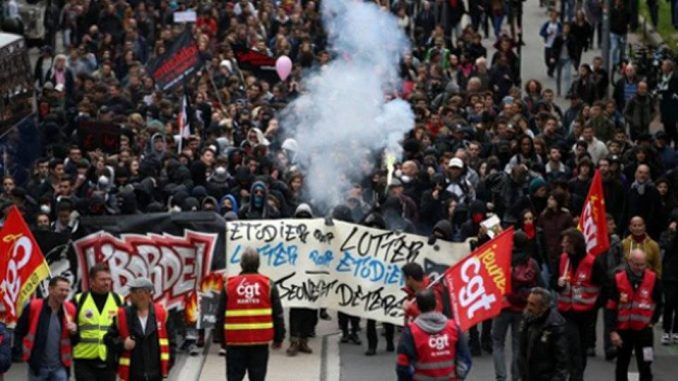 Major strikes are starting in France on April 3 to oppose the Macron government’s plans to impose austerity on the French working class, lay off 120,000 public sector workers and weaken the labor movement. But French workers are fighting back through political strikes, like the U.S. teachers’ strikes in West Virginia,  Oklahoma and Kentucky.

Railroad workers have scheduled the first two days of the 36-day strike they plan to hold before the end of June. They intend to strike April 3-4 and then work for three days. Sanitation and sewage workers are going out on strike during the first week of April and are considering staying out until June. Air France workers are striking on April 3, 10 and 11, but haven’t decided how long they will hold these work stoppages. Some electricity workers have given notice that they intend to strike every day for the next three months.

Workers in France have a constitutional right to strike as long as they give a few days notice. Concerned that a major portion of its transportation system is not going to operate, the government is warning these union members not to interfere with strikebreakers.

SNCF, the government-owned company that runs the railroads, is promising a bonus to any manager with a train operator’s certificate who agrees to drive a train. SNCF management is also disputing the validity of the strike notice that the CGT, UNSA and CFDT unions, which represent railroad workers, have given.

A coalition of 12 left-wing parties, ranging from the Greens to the Maoist Communist Party of French Workers (PCOF), has been formed to resist “the breakup of the SNCF,” a precursor to the government’s goal of breaking up the organized public service sector in France.

The left in France is still a significant political force. In the most recent presidential election in 2017, members of the left coalition received between 25 percent and 30 percent of the votes cast.

At a press conference held by SUD Rail and CGT Rail at the end of March, Danielle Simonnet, of the Party of the Left, said: “One chant sums it up: when everything is privatized, of all we’ll be deprived.” (L’Obs, March 30) SUD Rail, another major union of railroad workers, plans to strike until victory or the end of June.

Clémentine Autain, representing France Unbowed, said at the same media event: “This is a trial of strength between the unions and the government.  We must win it.” The press conference ended with a chant of “Together! Together! Yeah!” This slogan goes back to the victorious struggle of 1995 when the railroad workers beat back the government of Alain Juppé.

French sanitation workers, who are mainly organized by the CGT in both the private and the public sector, have a nasty job. According to Baptiste Talbot, the leader of the Federation of Public Service, “Our life expectancy is 15 years less than that of a normal worker, and we are three times more likely to die before the age of 65.” (cgt Paris, March 24)

That is why sanitation workers are demanding full retirement at age 50. They are beginning an unlimited strike April 3, but the union has already held job actions in several cities. That can be seen on French television, which shows garbage piling up in Paris and Marseilles, and reports on work stoppages in eastern and northern areas of the country.

The union movement is not only mobilizing itself but also its allies. It has beaten back government attacks in the past and is confident it can win this struggle. Organized labor forces are determined to oppose France becoming a lean, mean, modern imperialist state on the backs of the workers.