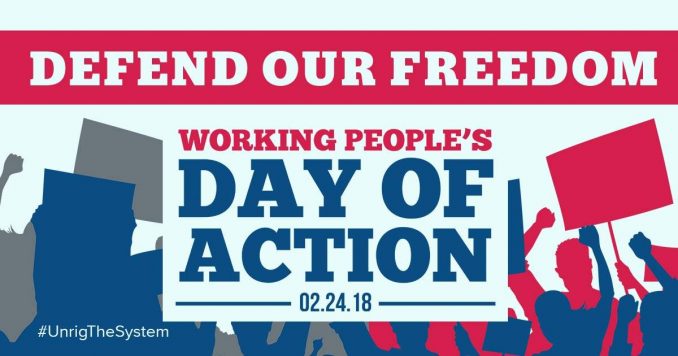 After the shock of Trump’s victory in 2017, unions have been relatively quiet  with no major protests. At the same time, anger among working women and men has been growing, along with right-wing attacks on unions.

A coalition of the major public service unions, those most directly under attack, has called for nationally coordinated protests, Working People’s Day of Action, on Feb. 24 in 25 cities. The unions involved are the American Federation of Teachers; National Education Association; American Federation of State, County and Municipal Employees; and Service Employees Union.

The protests were sparked by the Janus v. AFSCME case, due to be heard by the U.S. Supreme Court on Feb. 26, but they go much deeper. The union coalition is calling for “working people and our allies” to join forces in “standing up for our freedoms and demanding an end to a system that’s rigged against us. We will rise up and fight.”

What the struggle is about

Currently, unions have contracts that protect their members, with regard to not only higher salaries and benefits, but also safer working conditions, an end to unpaid overtime, and limits on arbitrary hiring and firing. A union contract at a workplace or within an industry protects all workers to a degree, not just those who have actually joined the union. A union contract puts a floor under the salary and conditions that nonunionized workers face.

For the past 50 years, workers and the unions that protect them have been under unceasing attack from billionaire capitalist owners who have rigged the system to protect their profit making.

A main tool in the billionaires’ attack on unions is instituting so-called “right to work” laws. If a union has won a democratic election at a particular workplace, it is legally obligated to bargain for and represent all the workers. A worker has the right to not join the union, but the union is still obligated to represent all of them. Bargaining and enforcing a union contract are an expensive proposition. What a right-to-work-(for-less) law does is prevent unions from insisting that workers who don’t join still pay their “fair share” for union representation.

Bruce Rauner, the billionaire governor of Illinois, originally started the lawsuit against AFSCME Council 31. Rauner’s suit attempted to weaken this Illinois local by banning “fair share” fees for unions involved in state government. When the federal district court said Rauner didn’t have standing to bring the suit, he found a state employee — Mark Janus — willing to allow the legal challenge to proceed in his name.

The Janus suit is backed by the Liberty Justice Center (an arm of the right-wing Illinois Policy Institute) and the National Right to Work Foundation, both part of a network funded by corporate billionaires who use the U.S. legal system to pass rules against the rights of everyday working people.

“Right to work” began in the 1930s as a crusade to preserve white supremacy over Black working people in states of the former Confederacy. Today Black workers are more likely to be union members than white, Asian or Latinx workers, according to the Bureau of Labor Statistics.

Black women face a double wage gap, in both gender and race. They make up 17.7 percent of public sector workers, although African Americans make up only 12.3 percent of the U.S. population, according to the U.S. Census Bureau. Unions have a measurable impact in reducing the pay gap Black women face. An adverse decision in the Janus case will increase the inequalities both male and female Black workers already suffer.

A few months ago, public service unions were getting ready for Janus by simply having their workers sign new dues checkoff cards, to try to keep membership stable.  But in the past few months, workers’ anger has grown into a feeling that their unions have to fight back.

The union leadership in general would probably prefer to push for voting in the upcoming congressional elections elections. But the ballot box is months away and the class struggle is snapping at their heels right now.