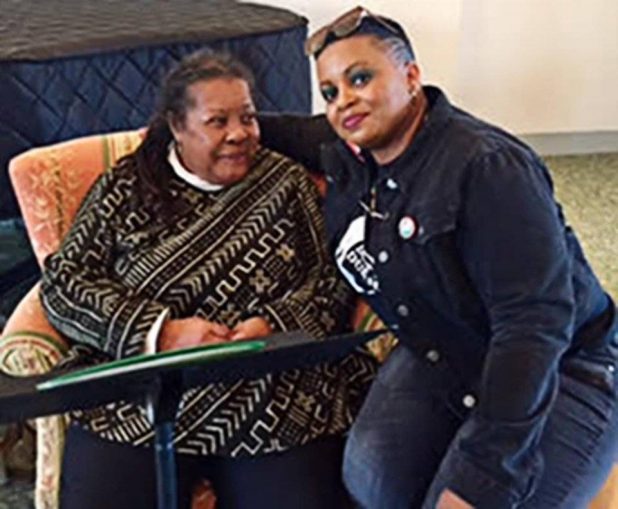 Durham, N.C. — For Black History Month, I would like to introduce or reintroduce you to Ruby Nell Sales. Born July 8, 1948, in Jemison, Ala., Ruby Sales is the founder and director of the Spirit House Project. She is one of 50 African Americans to be spotlighted in the new Smithsonian National Museum of African American History and Culture in Washington, D.C.

I met Ruby Sales for the first time when she spoke at a Feb. 1 forum with community leaders and activists in Durham. Later, she spoke at North Carolina Central University, a historically Black university. Sales’ visit for Black History Month was sponsored by many local organizations.

As a teenager in 1965, Ruby Sales participated in the Selma-to-Montgomery march, answering a call put out by the Rev. Dr. Martin Luther King Jr. and other organizers. Later that year, during organizing for the Black Civil Rights movement, Sales and activist Jonathan Myrick Daniels were jailed for trying to register voters in the Lowndes County town of Hayneville, Ala.

Daniels pulled Sales out of the way and took a bullet that was meant to kill her on the steps of a convenience store, having been released from jail that same day. Daniels died from the shotgun blast fired by a county deputy sheriff. The deputy sheriff was later acquitted.

At the sham trial, Daniels was vilified for reading “Communist literature while in jail and for wearing colored underwear.” Despite receiving death threats, 17-year-old Sales stood her ground and faced her oppressors, testifying in the face of many racists and white supremacists. She stood in the long line of Black women speaking out against injustice, like Mrs. Recy Taylor in Alabama in 1944 and Erica Garner in New York in 2014.

During the forum talk, Sales touched on many topics, but what stood out to me was white supremacy.

Sales said, “White supremacy is a death sentence for the oppressor and the oppressed. It creates unnecessary fear.” This instilled an “aha” moment for me.

The pseudoscience of white supremacy is derived from eugenics, which in 1883 was given the racist definition of “improvement of the human race germplasm through better breeding.” Genocide was, and is still, allowed due to a belief in eugenics — and fear. (DNA Science Blog, Sept. 21, 2017)

In the U.S., an early legal upholding of eugenics came in 1927, relating to Carrie Buck. As the blog noted, Carrie Buck had been sterilized because her own child, her mother and Carrie were all said to be “feeble-minded.” Supreme Court Justice Oliver Wendell Holmes Jr. wrote in the ruling against them: “Three generations of imbeciles are enough.”

Fear makes it easy to create a system that systemically kills. Either you are literally killed by police because of the fear Black skin has been said to create. Or you are killed by many other forms of genocide, such as being penalized for being poor. Or your people are being bombarded with billboards in disenfranchised, redlined and gerrymandered neighbor­hoods that promote abortions for Black and Brown women. This is in stark contrast to what is found in white neighborhoods where the billboards tell you to find an alternative to ­abortions.

In November 2017, I attended the Workers World Party National Conference in Newark, N.J. The conference was held to “Chart Our Next Steps in the Struggle to Smash White Supremacy, Capitalism, Imperialism — Fight for Socialism!”

Sales was a reminder to me to keep this fight going into 2018. “Movement is painful, and it is continual,” said Sales.

Revolution is a daily call to action. Agitations that help to decimate the racist counterrevolution are essential to our movement. Your call to action is to smash capitalism and smash nationalism. Sales said: “It creates the king’s foot soldiers.”

Nationalism is the tool used by white supremacists to create Immigration and Customs Enforcement internment camps. Checkpoints to verify citizenship, as well as the denaturalization of citizenship are byproducts of white nationalism. For instance, this January an Indian-born man, Baljinder Singh, was the first person ever to be stripped of his American naturalization status under a new ICE initiative, Operation Janus.

We all must continue to agitate for the eradication of ICE. When we do this, we are in turn against white nationalism, white supremacy and the vile wheels of capi­tal­ism that do not benefit us as workers.

We cannot and must not go back. Fear can only lead us to death.