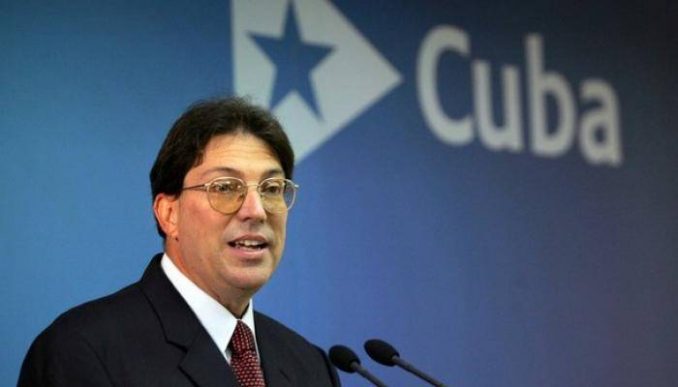 New York — For the 26th consecutive year, Cuba’s resolution, “Necessity of ending the economic, commercial and financial blockade imposed by the United States of America against Cuba,” was placed for debate and vote before the 193 member countries of the United Nations General Assembly on Nov. 1.

Many people, including Cuban Americans, had signed up to sit in the U.N. gallery in solidarity with socialist Cuba. The audible applause and cheers of observers, and of U.N. delegates representing every corner of the world, punctuated the presentation of Cuba’s Foreign Minister Bruno Rodríguez Parrilla.

No one was surprised by the final vote of 191 to 2, when only the U.S. and its client state Israel opposed ending the unilateral, genocidal and extraterritorial U.S. blockade of the much smaller Cuba.

Rodríguez Parrilla sharply rebutted the “disrespectful, offensive, and interventionist statements” of U.S. Ambassador to the U.N. Nikki Haley. She repeated Trump’s June 16 worn-out allegations of supposed human rights violations in Cuba as an excuse to intensify the ­blockade.

Haley had trivialized Cuba’s resolution before the U.N. as a distracting “shiny object,” noting only that the U.S. Congress can end the blockade. She declared U.N resolutions to be “political theater”; boasted that the U.S. didn’t care it was alone in “defending human rights”; and in rude, imperial style, turned her back on the world and walked out.

Speaking truth to power, Foreign Minister Rodríguez Parrilla said before the General Assembly what the world knows: “The United States, where flagrant violations of human rights are committed, of deep concern to the international community, does not have the slightest moral authority to criticize Cuba, a small, country characterized by its solidarity, with an extensive, recognized international record; an honorable, hard-working, and friendly people.

“[Haley] spoke in the name of the head of an empire that is responsible for most of the wars in progress on the planet today, and which murders innocent people, and is the decisive factor in instability worldwide and the very serious threats to peace and international security, trampling international law and the United Nations Charter, which she cynically evoked. …

“President Trump does not have the slightest moral authority to question Cuba. He leads a government of millionaires who intend to implement brutal measures against the poor and low-income families of this country, minorities and immigrants. He follows a program which encourages hate and division, and promotes a dangerous idea of exceptionalism and supremacy disguised as patriotism, and which will lead to more violence. He ignores the will of voters: Two-thirds of U.S. citizens and Cuban residents in the United States, as well, support an end to the blockade.

“Current U.S. policies harm citizens; corruption reigns in politics which have been hijacked by so-called special interests, that is, by the interests and the money of corporations [with] no support for education, health or social security; restrictions on union organizing; and terrible gender-based discrimination.

“Deserving of condemnation are the use of torture; police murders of African-Americans; civilian deaths caused by its troops; the indiscriminate, racially motivated death penalty; the murders, repression and police surveillance of immigrants; the separation of families; the detention and deportation of minors; and the brutal measures threatening the children of undocumented immigrants who grew up and were educated in the United States.

“This is the government that lost the popular vote.” (Complete text at tinyurl.com/ycpzumaz)

Although the current U.S. attack focuses on the 1959 Cuban Revolution, Foreign Minister Rodríguez Parrilla reminded listeners that “the appetite for annexation and domination, of what was and is today U.S. imperialism, had already been unleashed” when Cuba took up arms in its 1868 war of independence.

The 1898 explosion of the USS Maine became a pretext for the U.S. to enter the continuing Cuban struggle for independence in the guise of allies, only to become invaders and occupiers. The U.S. imposed 60 years of domination on Cuba that only ended on Jan. 1, 1959, with the Revolution’s triumph.

That the current blockade imposed by the U.S. hurts the Cuban people is undeniable. But as Cuba’s Foreign Minister reminded in his presentation, misery from the blockade leading to regime change — not human rights — is the expressed intention of the U.S.

Rodríguez Parrilla quoted from the infamous, then-secret 1960 letter by Deputy Assistant Secretary of State Lester Mallory that advocated promoting “disenchantment and disaffection based on economic dissatisfaction and hardship. [A]ll possible means should be undertaken promptly to weaken the economic life of Cuba … denying money and supplies to Cuba, to decrease monetary and real wages.” In the words of this U.S. official, the blockade of Cuba was created “to bring about hunger, desperation and overthrow of government.” (tinyurl.com/h6tm8e5)

In what is shaping up to be another pretext invented by the U.S. to further disrupt U.S.-Cuba relations, mysterious illnesses have reportedly affected diplomats at the U.S. Embassy in Havana. Cuba has issued a special investigatory documentary debunking U.S. claims. (tinyurl.com/yblm6y82)

Foreign Minister Rodríguez Parrilla noted that the U.S. is using this pretext to undermine the right of Cuban citizens to travel freely and visit the U.S. for short periods, and to hinder family reunification under the bilateral agreement to grant no less than 20,000 immigrant visas per year. He emphasized the U.S. issued “an unfounded and dishonest warning to its citizens to avoid visiting Cuba and continues to restrict travel to Cuba for U.S. residents.”

Rodríguez Parrilla continued: “The U.S. arbitrarily and groundlessly reduced the personnel of our Consulate General in Washington, limiting the capacity to provide services to U.S. travelers and especially to Cuban residents who have the absolute right to visit and interact normally with their nation and the Embassy, dismantling the Economic-Commercial Office with the malicious political aim of eliminating dialogue with the U.S. business sector.”

Foreign Minister Rodríguez Parrilla announced changes to Cuba’s immigration policies on Oct. 28 at the Fourth National Meeting of Cuban Residents Living in the United States. These changes will take effect Jan. 1, 2018, and will help strengthen ties of Cuban emigration with the U.S.

Those attending the Howard University meeting, which included 129 Cubans from 17 states, issued a statement rejecting the Trump administration’s June 16 announcements regarding its policy toward Cuba, describing those as a setback in bilateral relations of recent years. (­tinyurl.com/yb86edor)

The Trump administration’s reversion to the 1960 U.S. blockade playbook ignores the new reality of Cuba’s relationship to the world, as well as within the U.S.

The U.N. representative from Saint Vincent and the Grenadines, Rhonda King, speaking on behalf of the Caribbean Community (CARICOM), pointed out the U.S. blockade was “not just as a punitive act against Cuba, but as an impediment to our shared regional development.” Citing almost universal opposition to the blockade, she took notice that “[C]itizens across the United States were joining the international community by increasingly voicing their disapproval and calling for the lifting of unilateral sanctions.”

King added: “Today, 73 percent of U.S. citizens and 63 percent of Cubans living in the U.S. support the lifting of the blockade.”