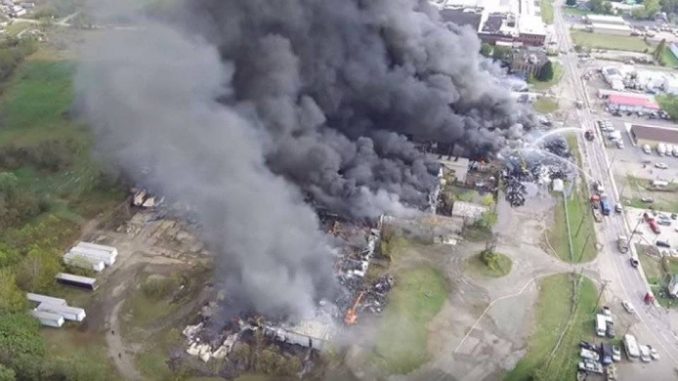 A fire burns at the former Ames plant in Parkersburg, West Virginia. The fire started on Oct. 21.

By Xzander Stephens in the Parkersburg, W.Va., area

It was around 12:20 a.m. I had just gotten off a 10-hour shift and was heading back to my apartment when I happened to notice what looked like a gas flame at a plant off in the distance. My ride and I decided to investigate, so we got off 7th Street and began heading to the interstate. Once there we saw the biggest fire I had ever seen, with a thick black column of smoke rising shooting out from it as sirens whined in the background.

I assumed it was some freak accident, that it would be put out, and that I’d hear about it in our local news. I headed home, ate my meal and went to sleep.

What I then woke up to, and lived through over the next week, was far different than anything I could imagine.

What had taken place was that a plastics warehouse owned by Intercontinental Export-Import Inc. had caught on fire. The city of Parkersburg was thoroughly unprepared, despite hosting 30 or more chemical plants in and around the city, including four or five IEI warehouses.

More than 100 first-responder firefighters from 40 different fire stations, including from neighboring Ohio, as well as an environmental emergency company, came to put out what many began to call Chemblaze 2017.

Despite sporadic rainfall and the relentless day-and-night efforts of the first responders, the blaze continued for nearly a week. The thick black column traveled from “ground zero” to neighboring working-class communities as well as communities across the river on the northside of Parkersburg. Residents of towns 30 miles away have reported the smell of burnt chemicals in the air.

A thick, inescapable chemical odor was constantly present throughout the week, forcing city and state officials to declare a state of emergency. Schools were closed, residents were warned to stay indoors, and gas masks were distributed in Parkersburg and its sister city of Vienna.

Myself and many of my neighbors, even while staying indoors, experienced symptoms including nausea, burning eyes, headaches and increased respiratory problems even during day six of the disaster, with the fire largely put out and no visible smoke hovering over the communities.

From initial reports, roughly 50 to 60 patients have been treated in relation to the fire, many with hallmark symptoms of chemical pneumonitis. This figure is likely to increase as it is only reflective of patients going to the emergency room.

Eyewitnesses have reported that several of the first responders were visibly ill in the street, and had to be taken to hospital.

Two days after the fire began, amidst the usual song and dance of “everything is fine, it’s all safe,” the city urged residents to boil their water to neutralize possible contaminants related to the fire.

Three days into the disaster, a Wood County Commision meeting was held where IEI representative Sunny Naik stated: “A disaster of this nature is something we have never encountered before. The (fire departments) have the most technical knowledge on a disaster of this sort. … We provided the MSDS [Material Safety Data Sheets] of the things in the building. We will take all responsibility for their insurance companies as the No. 1 priority will be cleaning up the site.” (newsandsentinel.com, Oct. 24)

Sounds reasonable enough, except within these statements is a glaringly bold-faced corporate lie: State officials have said that IEI has filed absolutely no MSDS inventories. The state and federal chemical right-to-know law requires disclosures for certain chemicals if stored in certain amounts.

Lawrence Messina, director of communications for the West Virginia Department of Military Affairs and Public Safety, said that no emergency and hazardous chemical inventory forms for the IEI facility were supplied to emergency response entities.

In 2015, the WVDEP issued a consent order regarding IEI’s failure to file water runoff discharge monitoring reports. IEI was slapped with an $80,000 penalty and was forced to make an initial payment of $20,000. The DEP chief communications officer, Jake Glance, stated that “the rest of it was contingent on them filing their DMRs with us, and they never did.” (newsandsentinel.com, Oct. 24)

The DEP’s Division of Water and Waste Management investigated the conditions in the warehouse in February. Inspectors said that “waste and pellets were still scattered around the site,” a diesel spill had not been fully cleaned, and storage drums left outside were deteriorating. Additionally, the company had continued water pollution violations and had not submitted required monthly progress reports to the DEP. (wvgazettemail.com, Oct. 25)

An electrical fire broke out at the same IEI plant in 2012, but was quickly put out by local fire departments. Former City Fire Inspector Tim Flinn recalls that the sprinkler system didn’t work then. (thenewscenter.tv, Oct. 25)

The plastics warehouse, formerly an Ames True Temper Tool plant, had a contract with DuPont to store its chemicals. DuPont officials have now attempted to distance themselves and obfuscate their relationship to the plant.

While no official answer has been given as to the exact cause of the most recent fire, it’s a safe bet to assume that investigators will come back with a report of corporate negligence as the root cause — something all too familiar to the citizens of Parkersburg, and to West Virginians in general.