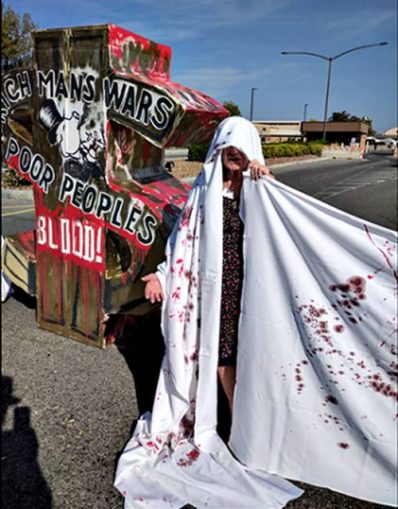 The grassroots group Upstate Drone Action delivered a citizens’ war crime indictment to the chain of command at Hancock Air Force Base in Syracuse, N.Y., on Sept. 25. Seven UDA members were arrested in the action.

The group also placed a six-foot-high dollar sign dripping with “blood” at the main gate of the base to dramatize what they see as the determining factor in Pentagon/CIA warmongering: corporate greed.

Hancock AFB hosts the 174th Attack Wing of the NY National Guard, one of two Reaper drone “attack wings” in the state. Piloted from Hancock, the MQ9 Reaper drone is a satellite-directed assassin weapon flown over Afghanistan. The CIA also uses drones for secret and illegal attacks on northwest Pakistan and other majority-Islamic nations. These attacks have dislocated whole communities and killed many hundreds of people, including noncombatants. (“Living Under Drones,” Stanford University and New York University law schools)

One of the arrestees, Mark Scibilia-Carver, noted in the Sept. 26 UDA press release: “U.S. taxpayers fund this terrorism … instead of funding health, education and infrastructure here.”

SRC, a “not-for-profit” spun off from Syracuse University, recently received a $65 million contract from the U.S. Department of Defense for its “Mobile Skylight Van” system to detect, track and defeat small “enemy drones” — which even provide the location of the “hostile operator.” (syracuse.com, Sept. 29)

“This whole counter-drone technology that SRC developed for the military is one of the hottest markets in the civilian drone industry,” Brinker said. “Jails, stadiums, power plants, prisons — they’re all concerned about protecting their infrastructure. … Every sheriff that has a prison in New York wants some sort of anti-drone system.”

The mammoth Reaper drone, used for bombing by the Pentagon and the CIA, and the anti-drone systems under development by military-industrial companies, used to disarm those resisting the imperialist onslaught, are the flip sides of U.S. military strategy for 21st century warfare.

Upstate Drone Action has been engaged in its own persistent campaign to expose drone war crimes and U.S. warfare for profit. Since 2010, there have been some 200 anti-Reaper arrests at Hancock and about a dozen street theater actions.

See Wilton Vought’s video of the action at youtu.be/PHBnj8HbmMU. More information is at upstatedroneaction.org.