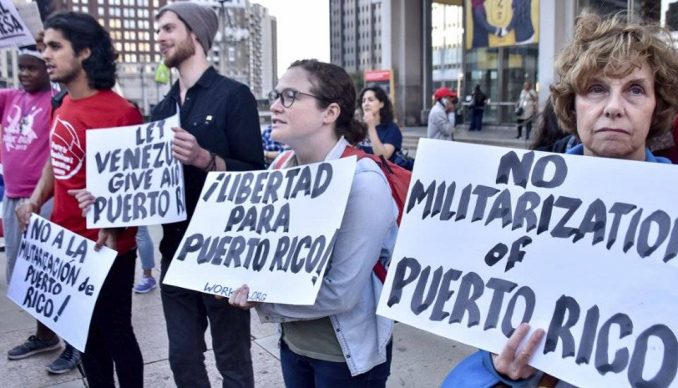 Oct. 2 — A year after the United States invaded Puerto Rico in 1898 and imposed a military regime, Hurricane San Ciriaco hit the island and devastated nearly its entire infrastructure. This allowed the invaders to restructure the country at their convenience. Agriculture was destroyed, and the coffee and tobacco that went to European markets were eventually replaced by gigantic sugar cane plantations imposed by the U.S. to benefit their sugar industry.

Profits went to their home offices in New York and Boston, thus beginning the draining of Boricua’s wealth by the U.S. Together with this, the U.S. Congress passed the Foraker Act in 1900, which established the U.S. dollar as the official currency of Puerto Rico, replacing the peso, which the U.S. had already devalued in January 1899. With one Yankee slap, Puerto Ricans lost 40 percent of their wealth.

Today, after Hurricane Maria’s Sept. 20 devastation of the island, it seems that the Yankee empire is preparing to restructure Puerto Rico again to serve its new interests in these times of terrible capitalist decline, which makes that system no less cruel and criminal.

This latest restructuring had already begun when the U.S. Congress passed the Promesa Act under the Democratic administration of President Barack Obama, forcing Puerto Ricans to pay an illegitimate and odious debt of $74 billion. A debt for which the authorities still — and this must be stressed — refuse to accept a people’s audit.

This act imposed a Financial Control Board of seven members (known as the “Junta”) associated with the banking industry. This Junta will rule Puerto Rico, including over the island’s government. Just before María struck, the FCB had already imposed a horrific and damaging neoliberal Fiscal Plan for Puerto Rico directed against the working people, which would plunge more people into poverty. Part of Promesa is the privatization of state entities such as the PR Electric Power Authority (AEE), especially its electricity-generating capacity, which produces the most profits.

It is within this framework that the monumental devastation of the hurricane arrived.

Like a harbinger of what is currently happening, writer Yarimar Bonilla quotes from an interview of a local wealth manager in her article in the Sept. 22 Washington Post, titled “Why would anyone in Puerto Rico want a hurricane? Because someone will get rich.”

Bonilla says the manager “was extremely upbeat about the economic climate. Anticipating government default, she had redirected her clients’ assets toward U.S. stocks. ‘The only thing we need now is a hurricane.’ She was referring to how such natural disasters bring in federal money for rebuilding and often become a boon to the construction industry. As I left her office, she encouraged me to buy stock in Home Depot.”

Nearly a week after the terrible event, the Pentagon announced the arrival of forces to “help the people of Puerto Rico.” The Department of Defense increased its staff from 460 to 6,433 and stated “that will continue to rise as needed,” according to Puerto Rican Gov. Ricardo Roselló.

From Fort Bliss, Texas, 16 helicopters will arrive between Oct. 2 and 3. “‘The assault ship USS Wasp and Navy aircraft are also en route to the island,’ said Pentagon spokesperson Lt. Col. Jaime Davis.” (elnuevodia.com, Oct. 1) Also arriving are 210 military police officers and infantry personnel from the National Guard. Police will arrive from New York and New Jersey. Supposedly the USNS Comfort hospital ship will arrive on the coast of San Juan on Oct. 4.

The Pentagon has already taken command of the “reconstruction” of Puerto Rico with these officers and the Army Corps of Engineers. At the governor’s daily press conferences you can see some of these military officers by his side. And we shouldn’t forget the Federal Emergency Management Agency, which is in charge of the distribution of food, water and basic supplies.

And that is precisely the big problem in Puerto Rico now.

While in front of the television cameras and on the few radio stations operating now, it has been announced that these supplies are being delivered to the 78 municipalities of the island, this statement is far from reality. Even the same corporate news media denounce the lack of help to places most distant from the capital. These very reporters have crossed rivers and difficult roads to reach those communities and make them visible on the news.

Burying their dead in the back yard

Communities after communities in front of cameras narrate the tragedy and the subhuman conditions they endure, isolated from the rest of the island. Living for almost two weeks in houses without roofs, electricity, drinking water, communication or food, the people are drinking dirty water from contaminated rivers, where they also wash their clothes and bathe. They bury their dead in the back yard.

That’s how many communities are living now. Where the “mighty” U.S. Armed Forces, which can build a city with air conditioning in the middle of the desert in a few days as they proved during the invasion of Iraq, but can’t even cross a river to bring necessary aid in Pueerto Rico. This is just one more crime committed by the Pentagon.

FEMA, meanwhile, is committing another crime.

FEMA and the military act together and depend upon each other. FEMA has become the “coordinator” of aid arriving on the island and the military supposedly helps with distribution. The problem is that this is not really happening, as indicated above.

The people are saving the people

The Puerto Rican diaspora in the U.S. is living with anguish and despair for their families in the archipelago. These sentiments have inspired a profound desire for reconstruction, starting with the collection of basic items needed, collected and sent to Puerto Rico. However, once anything reaches the island, FEMA takes over the containers and hinders distribution. Thousands of containers have been stranded in ports, including containers from corporations that, for whatever reason, have not taken out the contents, preventing the flow of needed materials.

The government has accused truck drivers of not helping with the distribution. However, the truck drivers have explained to the press that for days they have been waiting for agencies to hire them for distribution, but they have been repeatedly ignored. Many of them are waiting for work without returning to their homes so as not to use gasoline due to the great shortage of fuel. They accuse the shipping company Crowley of using drivers from private agencies, leaving out independent Puerto Rican drivers.

Faced with this reality, the Puerto Rican diaspora is looking for alternatives other than sending items in containers through the Crowley shipping company, choosing to send them independently. People traveling to Puerto Rico carry all the bags that the airlines allow — to accommodate supplies for the people.

Ana, a friend of this writer, who will soon travel to the island, said she was able to get a ticket in first class, which allows her to carry 70 pounds per suitcase. She will pack supplies, leaving behind her personal belongings. That is how many people are sending supplies which would not otherwise reach the communities that most need them.

From several reports, we can see how the people are getting organized in their communities. Neighbors come together to clear roads and rebuild their homes with materials that can still be used. The effort is massive. Work brigades from the diaspora are also organizing to assist in the reconstruction of Puerto Rico.

Angélica Acosta of the Socialist Front of Puerto Rico told Workers World/Mundo Obrero: “The working class went out with their trucks, uniforms and much more to get the country going as they know how to do daily. In other places, they finally get to meet their neighbors or share more with them. The people are sharing their food and utensils. There are communities that have begun to erect destroyed houses, like the brave people that we are.”

Help is coming from individual artists and personalities — mostly Puerto Ricans — who reside in the United States. Professional athletes have brought aid via private aircraft. Many are raising funds for the country’s recovery. Puerto Rico, despite the great tragedy, is not alone. Other countries are showing solidarity. The Dominican Republic sent gasoline. Panama has also sent aid.

There are organizations on the island organizing brigades for the distribution of food, water and medicine and helping with the reconstruction of the country. This writer was able to communicate with Mercedes Martínez, president of the Puerto Rico Teachers’ Federation (in Spanish FMPR), which is one of these organizations. They work together with the General Confederation of Workers (in Spanish CGT) and the Jornada Se Acabaron las Promesas, an organization against the Promesa law. These brigades will begin work on Oct. 3. FMPR also accepts donations through gofundme.com

Cuba has offered medical assistance, but so far it’s not known whether aid can reach Puerto Rico due to U.S.-imposed colonial laws. The mayor of San Juan, Carmen Yulín Cruz Soto, accepted the help of Venezuela, which will send gasoline. Venezuela’s nationalized oil company, PDVSA, through its Citgo company in the U.S., can ship the product. In addition, due to international pressure, President No. 45 lifted the Jones Act of 1920 for 10 days. This law prevents Puerto Rico from using any shipping company other than from the U.S., with U.S. personnel and ships built in the United States.

Donald Trump will travel to the island Oct. 3, apparently for two hours. His itinerary is secret.

But it’s not just Trump who will visit. There are other vultures lurking to see how they can take advantage of Puerto Rico. That is the biggest problem: It arises from the restructuring that U.S. capitalism wants to make, taking advantage of the devastation of the island.

Also expected is John Davies, president of the Baton Rouge Foundation that participated in the restructuring of Louisiana in 2005 after the devastation of Hurricane Katrina. Davies is advising the “Recovery Fund” that the Center for a New Economy created on Sept. 22.

The CNE is composed of bankers and financial advisors who are very close to the process that the Fiscal Control Board is carrying out in PR. Here is the danger of restructuring with neoliberal privatizing measures. Such measures to privatize the energy sector are already included in the Promesa Act.

No to the militarization of Puerto Rico!

Repeal the Jones and Promesa Laws!
No to privatization!

Reparations to the Puerto Rican people for more than a century of U.S. crimes!