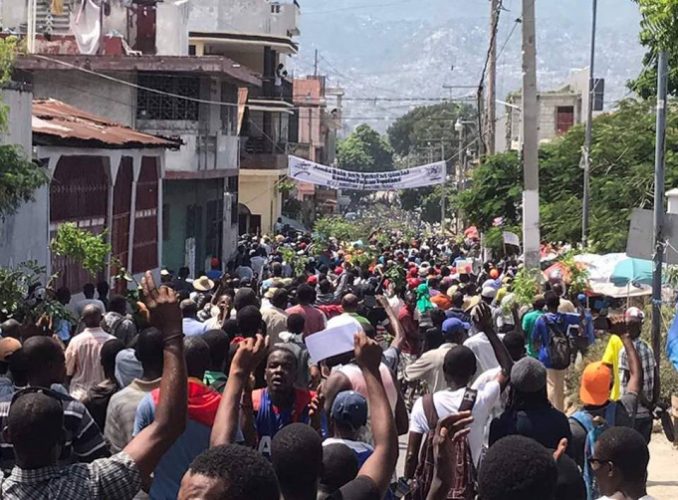 Thousands of Haitians marched through Port-au-Prince on Sept. 12 chanting “Down with Jovenel!” “Down with the bourgeoisie!” and “Liberty or death! The revolution is beginning!” (Haïti-Liberté, Sept. 13) Moïse Jovenel is the current president of Haiti.

A leaflet passed out during the marches raised the issue of the “tuberculosis wages” resulting from the Parliament’s refusal to raise the minimum wage of $4.77 a day. There is growing anger over Parliament passing a budget that requires drivers to pay $158 for an income tax report, which is waived if their income is less than $958 a year. (AFP, Sept. 13)

The day before, protesters had been in a single large group led by Fanmi Lavalas, the party started by Jean-Bertrand Aristide, who was elected President of Haiti in 1990 and 2000. The cops, using water cannon and tear gas, were able to keep them contained and away from downtown. The next day, they broke into smaller groups and the cops had much more trouble.

The protesters set up barricades of burning tires and rocks, blocking key intersections. Behind the presidential palace, the people threw rocks at the cops, who had unleashed stinging, high-pressure water and tear gas at protesters.

Two cars in front of the law offices of Planning Minister Aviol Fleurant were set on fire, and the windows of other cars in the parking lot were busted. Shop windows throughout the city were also damaged.

Also in the new budget is a tax on all Haitians — even those living abroad — who want to use government services of 10,000 gourdes, or $159, annually (depending on the exchange rate).

More demonstrations have been called for Sept. 20-23 by Dessalines Family, headed by Jean-Charles Moïse, a former presidential candidate. According to Van Bref Info, Haiti’s National Police attempted to arrest him on Sept. 12.

The struggle in Haiti is nowhere over — no matter how firmly the U.S. supports the new government of Moïse Jovenel.