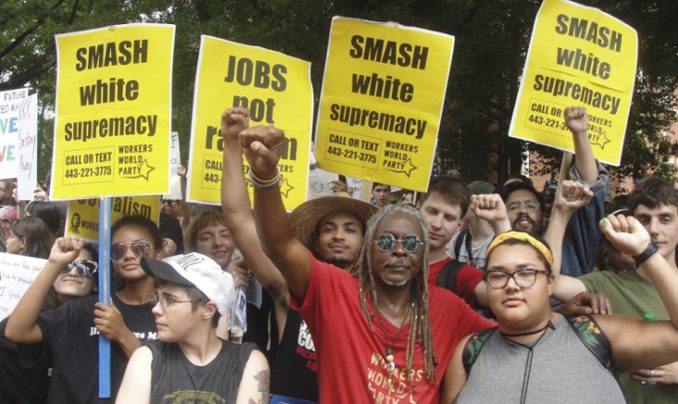 Thousands arrived in Charlottesville, Va., on July 8 to protest the Klan and their cop protectors. The city, under the guise of so-called “free speech,” had granted a permit to the terrorist Klan to have a “recruitment rally” at the city courthouse.

Those in opposition to the Klan mobilized for weeks beforehand in Charlottesville, throughout Virginia, the East Coast and beyond to build a mighty act of people’s resistance. Mass protests have been taking place in the city over the demand of working-class and oppressed people to remove white supremacist Confederate statues memorializing terrorists such as Gen. Robert E. Lee, the commander of the Confederate Army of Northern Virginia revered by racists.

In the face of hundreds of fully armed cops from at least seven jurisdictions, including the Virginia State Police, many in riot gear, and with police helicopters overhead, people’s fighters took over Justice Park, where the courthouse is located and surrounded the building. 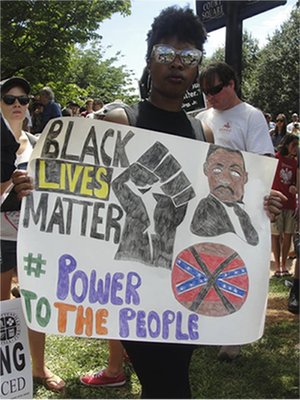 For at least an hour before Klan members arrived, protesters militantly and loudly let it be known that white supremacy in any form, anywhere will be resisted by any means necessary. Protesters joined picket lines and filled the streets adjacent to the park, holding high signs and banners declaring “Jobs Not the Klan,” “Kops and the Klan Go Hand in Hand,” “Black Lives Matter,” “Ban Racists, Not Refugees,” “Smash White Supremacy” and other slogans.

Due to the people’s protest, Klan members were delayed in arriving at the park and were only able to get inside fenced-in barricades with assistance from hundreds of cops. Protesters blocking an entrance to prevent Klan members from entering the park were brutalized by cops and then arrested.

While inside the barricades and protected by the cops, the Klan was drowned out by protesters’ militant chants. After the cops allowed the Klan to go over their permit time by at least 20 minutes, they escorted Klan members to their vehicles, parked in a city-owned garage. While protesters were objecting to this outrageous process, they were attacked by cops physically and with tear gas. At least 23 were arrested and at least two have been charged with felonies.

Despite the cop attacks, protesters militantly defended their space and remained until the last arrested person was out of jail on bond at midnight.

Anti-racist protesters are now mobilizing for another fightback against white supremacists from a variety of terrorist organizations that claim they will have a so-called alt-right demonstration in Charlottesville on Aug. 12.

To make a contribution to the legal fund, visit tinyurl.com/yagsa8wn/.