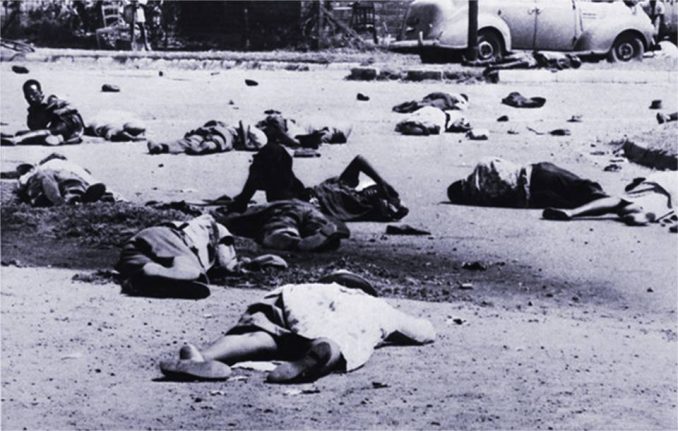 The capitalist media proclaimed billionaire banker David Rockefeller, who died March 20, to be a “great philanthropist.” None of the obituaries mentioned this rich monster croaked one day before the 57th anniversary of the Sharpeville massacre.

At least 69 South Africans protesting the apartheid government’s pass laws were murdered by police on March 21, 1960, in Sharpeville Township. Capitalist investors, fearing a revolution, began pulling their money out.

Lumumba was overthrown on Sept. 14, 1960, less than three months after Congo’s independence. He was tortured and then shot on Jan. 17, 1961. His body was thrown in an acid vat owned by Union Minière, the Belgian mining giant that exploited Congo’s tremendous mineral wealth. The Rockefellers owned a chunk of Union Minière. (“The Assassination of Lumumba” by Ludo De Witte)

David Rockefeller was the last surviving grandchild of the world’s first billionaire, John D. Rockefeller. The family made its colossal fortune off the Standard Oil trust whose descendants include Exxon Mobil and Chevron.

Big Oil runs the U.S. government, and the Pentagon is its protection agency. The U.S. dollar floats upon almost $1 trillion in world oil exports, nearly all traded in dollars. The Koch brothers can only dream of having Rockefeller power.

The State Department has been virtually owned by the Rockefellers. Former Supreme Court Justice Charles Evans Hughes fought for Rockefeller oil interests against Great Britain as Secretary of State in the early 1920s before being put on the Supreme Court as Chief Justice.

John Foster Dulles was managing partner of the Rockefellers’ favorite law firm — Sullivan & Cromwell — before becoming Eisenhower’s Secretary of State during the Cold War. John’s brother Allen Dulles was the CIA director who put the Shah back in power as Iran’s dictator via the spy agency’s “Operation Ajax.”

So it’s no accident that Trump’s Secretary of State is the former CEO of ExxonMobil, Rex Tillerson.

The year before, dozens of family members of coal miners striking against Rockefeller-owned Colorado Fuel and Iron were killed by National Guard and company thugs in the Ludlow Massacre.

David Rockefeller grew up in the eight-story Rockefeller mansion in Manhattan. It was torn down to make way for the Museum of Modern Art sculpture garden, which was nurtured by David’s mother, Abigail Aldrich Rockefeller.

Meanwhile. Nelson Rockefeller had Diego Rivera’s classic mural commissioned for Rockefeller Center destroyed in 1934 because it showed Marx, Engels and the leaders of the Russian Revolution.

Yet John Birch Society members believe the Rockefellers are communists. The Museum of Modern Art naturally featured the great communist painter Pablo Picasso, whose painting of the fascist bombing of Guernica during the Spanish Civil War was long displayed there.

The Rockefellers are today the biggest name in New York area real estate. David Rockefeller called for constructing the World Trade Center back in 1948.

The family’s Chase Manhattan merged with Morgan Guaranty to form J.P. Morgan Chase, the world’s most powerful bank with over $2 trillion in assets.

Founded with this surplus value, Rockefeller University is one of the largest medical research centers. But socialist Cuba has a lower infant mortality rate than capitalist United States, whose health care system is all about making profits.