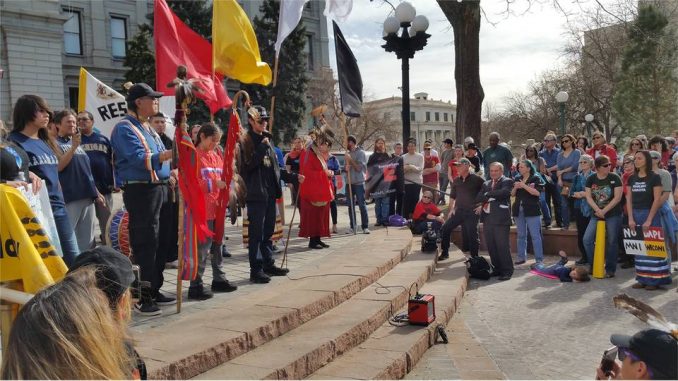 For a year, thousands of Indigenous peoples and activists have stopped the construction of the Dakota Access Pipeline across Native land and bodies of water.  These water protectors assert Indigenous sovereignty and the human right to clean water, not only for themselves, but also for up to 18 million people who depend on the water threatened by this pipeline.

As the Trump regime moves forward to allow Big Oil to restart construction of the DAPL beneath the Missouri River, military veterans are returning to Standing Rock. They pledge to shield Indigenous people from the heavily armed police force and company security guards arrayed against them.

“We are prepared to put our bodies between Native elders and a privatized military force,” said Elizabeth Williams, a 34-year-old Air Force veteran, who arrived at Standing Rock with other veterans on Feb. 10. “We stood in the face of fire before. We feel a responsibility to use the skills we have.” (Guardian, Feb. 11)

LaDonna Tamakawastewin Allard, a member of the Standing Rock Sioux Nation and a founder of the Sacred Stone camp, told the Guardian reporter, “The veterans are going to make sure everything is safe and sound. … The people on the ground have no protection.”

Standing Rock activists have been attacked with water cannons, mace, rubber bullets, teargas, pepper spray and concussion grenades; more than 700 have been arrested. Agents from the FBI’s Joint Terrorism Task Force have harassed Standing Rock supporters around the country.

“‘The idea that the government would attempt to construe this Indigenous-led non-violent movement into some kind of domestic terrorism investigation is unfathomable to me,’ said Lauren Regan, a civil rights attorney who has provided legal support to demonstrators” contacted by FBI agents. “It’s outrageous, it’s unwarranted … and it’s unconstitutional.” (Guardian, Feb. 10)

Over 1,000 veterans arrived at the camps to support and defend the struggle against the DAPL in December. The determination of Indigenous people, supported by a worldwide campaign, forced the Obama administration last year to direct the Army Corps of Engineers not to grant an easement for the final construction of the pipeline under the Missouri River until a full environmental impact study could be completed.

However, the extreme right wing and the Big Oil-friendly Trump regime have given the green light to this reckless project.  On Feb. 7, the Army Corps  granted the easement allowing Energy Transfer Partners to resume construction of the DAPL.  Army officials claim they were pressured by the Trump administration.

The dangers of this pipeline are demonstrated by the fact that thousands of gallons of oil have recently leaked from oil pipelines both in Canada and the U.S. In December 176,000 gallons leaked from an oil pipeline into a tributary of the Little Missouri River, just 150 miles away from Standing Rock. (Washington Post, Dec. 12)

Native people and their supporters have renewed their determined campaign to stop the DAPL. Around the country, thousands of activists have stepped up the support campaign for the heroic Standing Rock water protectors.  Here are  two highlights.

Over 500 people traveled to the Colorado State Capitol Building Feb. 10 to protest the DAPL and other pipelines carrying fossil fuels crossing Indigenous  lands and breaking treaties. They marched with drums and Native Nations’ flags to Wells Fargo Bank, which is heavily invested in the DAPL. An effort is being waged to get the city of Denver to divest from investments in or banks financing the pipeline. 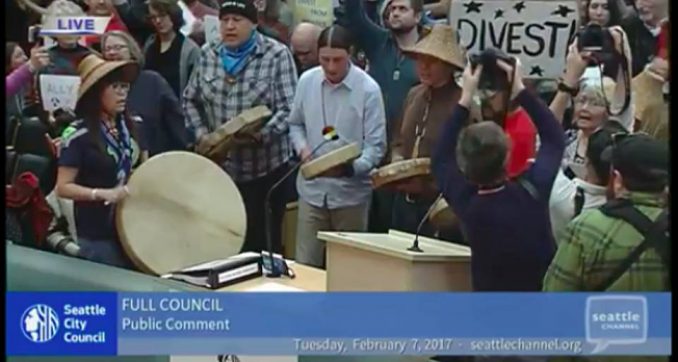 After a months-long campaign, protests forced the city of Seattle to divest from its $3 billion account with Wells Fargo Bank on Feb. 7. A coalition of groups led by Native peoples and joined by solidarity organizations forced the hand of the Seattle City Council. The vote for divestment came only an hour after the Army announced it would permit the DAPL construction.

The $3 billion a year that the city is divesting from Wells Fargo contains all of the city’s revenues, even from parking meters. The city resolution denounced Wells Fargo’s role as a lender for the DAPL and the bank’s role as a big investor in immigrant detention prisons through its stock in Geo Corporation, which owns over 60 facilities.

This winter Native solidarity activists joined anti-Trump demonstrations in Seattle and rallied several times at Wells Fargo headquarters. They held “divest pickets” at many of the bank’s branches around the city.

The packed City Council meetings were addressed by members of the Tlingit, Haida and Tsimshian Nations of Alaska and the Muckleshoot Nation near Seattle. Matt Remle, a leading local organizer from Standing Rock, and Olivia One Feather, a Standing Rock defender, also spoke.

On Feb. 11, NoDAPL protesters blocked busy Interstate Highway 5 in Bellingham, Wash. That day another strong protest was held in Seattle in solidarity with Standing Rock.

The Standing Rock Sioux Tribal Council has called for a National March of Native Nations on Washington on March 10. The call is being supported by the youth council at Standing Rock and many other water protectors.

See the Global Call to Action and further information at standwithstandingrock.net/march/.

Viviana Weinstein and Jim McMahan contributed to this article.