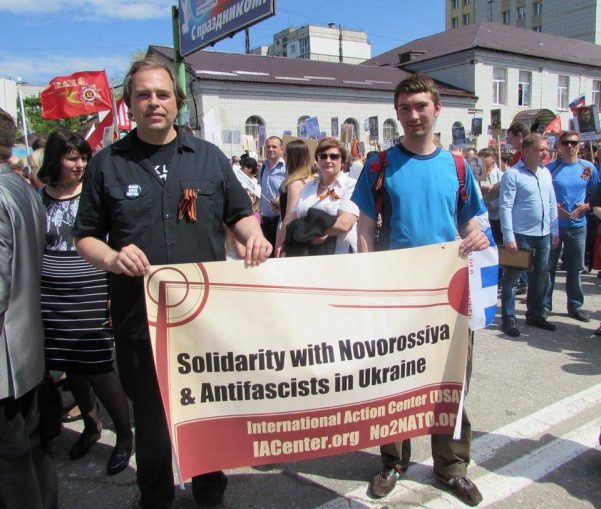 Following are excerpts from an interview with Workers World contributing editor Greg Butterfield published on the website Lugansk Comments on Jan. 19, before the J20 and J21 demonstrations against Trump. His remarks are still valid after these massive protests.

Lugansk Comments: Donald Trump’s victory caused a very strong reaction in U.S. society. Why? If Hillary Clinton had won, would the protests have been the same?

Greg Butterfield: Donald Trump’s election campaign attacked the most vulnerable and oppressed sectors of the working class in the United States. His often crude attacks against immigrants and refugees, against Muslims, against the fundamental rights of women and African Americans to equality and respect, against labor unions, gained him support from powerful capitalists and the police, disgruntled members of the middle classes and some workers. Trump’s demagogy created a political climate where neo-Nazis could raise their heads and have a claim to legitimacy in the mass media.

Since Trump’s election in November, incidents of racist and xenophobic violence have skyrocketed. Fascists and other reactionaries feel emboldened by his victory. Trump’s cabinet appointments of billionaires from some of the largest monopoly corporations have encouraged bosses to harden their anti-union position. His appointments of some of the worst U.S. war criminals, and his public threats against numerous countries — China, Iran, Mexico, Cuba, Venezuela and North Korea, to name a few — promise a further expansion of U.S. wars abroad.

For all these reasons, many workers, youth and other sectors of the population see Trump’s ascendancy to the most powerful political office in the world as a threat to their very existence — the same way that millions of people in Russia and Donbass felt Hillary Clinton was a threat to theirs.

This is why tens of thousands of people, especially young people, have taken to the streets to protest Trump in the days and weeks since his election.

On Jan. 20, thousands of people will travel to Washington, D.C., for protests against Trump’s inauguration. Mass protests are also planned that day in hundreds of cities and towns, not only in the U.S. but worldwide, from Vancouver to Manila. I am helping to organize one of the Washington demonstrations, called J20 Resist: Against Trump as the new face of U.S. imperialism, against racism, sexism and all oppression, against both the Republican and Democratic parties of capitalism, and to fight for a socialist future.

If Hillary Clinton had been elected, we would still be protesting on Jan. 20, although the immediate response from masses of people might have been less. For many decades, the U.S. ruling class has cultivated a popular view of the Democratic Party as the party of working people, oppressed minorities and women, and the Republican Party as the party of open white supremacy and big business rule. This allows them to switch back and forth when one or the other party falls out of favor. In reality, both parties carry out the same fundamental program of defending the wealthy, oppressing the poor and waging war on the people of the world.

L.C.: What is the role of the U.S. left forces in the protest movement against Trump? What are the demands put forward by the U.S. left? How do they see the future of the United States?

G.B.: The left movement is the backbone of the resistance to Trump. In some cases, the Democratic Party tries to take over or influence the demands of the movement in various ways — such as with its attacks on Russia. But we are used to dealing with this kind of behavior.

The last decade has seen important breakthroughs in the class struggle in the U.S., which have given hope to people struggling against U.S. imperialism all over the world. It began in 2006 with the mass movement of immigrant workers demanding legal recognition and rights. These workers, many from Mexico and Central America, brought their militant traditions with them.

Through them, May Day was revived as a day of struggle for the whole working class. Occupy Wall Street and the fight for a $15 minimum wage mobilized young people who saw no future for themselves under capitalism. The Black Lives Matter movement brought people into the streets against the most egregious racist violence by the state.

All these movements grew up in opposition to a Democratic Party administration as well as a Republican Congress. The young people who bring life to these movements understand that neither capitalist party has any solutions to offer them. It is our task to win these young people to a revolutionary, internationalist and socialist perspective.

One of our big challenges is to broaden the anti-imperialist, anti-war perspective of the movement. There are good signs, such as the growth of solidarity between the Black Lives Matter movement and the Palestinian struggle against Israeli occupation. But we still have much work to do.

L.C.: What are your demands regarding relations with Russia, ending the war in Donbass and the violation of human rights by the Ukrainian regime?

G.B.: While Trump has made overtures to Russia, we know that imperialism is a system which does not change its nature when one ruling class faction pushes aside another. Of course, we understand that countries facing U.S. aggression must take advantage of any opportunity to gain a breathing space and strengthen their defenses. But it would be a dangerous mistake for people anywhere in the world to put faith in Trump to fundamentally change U.S. imperialism’s drive to war and expansion. Only the revolutionary struggle of the workers and their allies can stop imperialist war, as the people of Russia proved so magnificently 100 years ago.

In this regard, I have seen some commentators, who call themselves friends of Russia and Donbass, compare our protest movement against Trump with the Maidan. In fact it is just the opposite. Trump is a wealthy oligarch and right-wing demagogue, like those Ukrainian oligarchs who funded the neo-Nazis on Maidan Square and the massacre of May 2, 2014, in Odessa. The program of Trump’s supporters is to foment racial and national hatred, scapegoat the poorest and most defenseless, and employ violence and slander against their opponents — just as the Maidan fascists did. Our movement against Trump is part of the same historic current as the anti-fascist resistance in Ukraine and the Donbass republics.

As communists, we have learned the lessons of history, from the Great Patriotic War to the recent history of Ukraine and Donbass. When fascists rear their heads, it is not the time to “wait and see” what will happen. It is time to organize and take action to demand our rights and push back the ultraright, as the people of Donetsk and Lugansk did in 2014.

For our part, on J20 and afterward, we will continue to stand in solidarity with the free people of Donbass and those suffering under the Ukrainian regime, while also fighting Trump.

The complete interview can be read at redstaroverdonbass.blogspot.com.