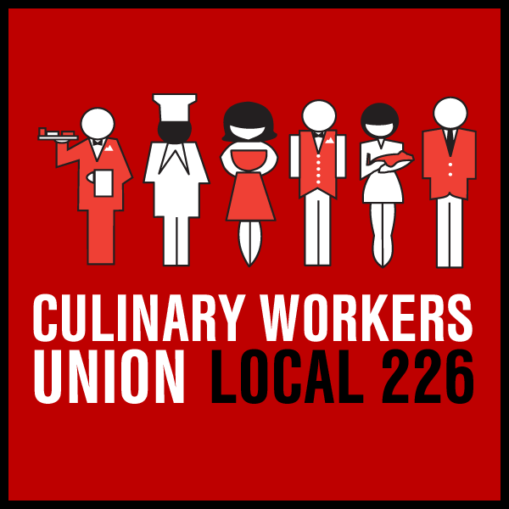 A majority of workers at the Trump International Hotel Las Vegas have voted “YES” to be represented by the Culinary Workers Union Local 226 and the Bartenders Union Local 165 of UNITE HERE.

After a vicious, two-year struggle, 500 workers at Trump International Hotel in Las Vegas emerged victorious Dec. 21, winning their first four-year contract guaranteeing annual raises, job security, health care and pensions. The majority are Latinx women workers, who joined UNITE HERE Culinary Workers Union Local 226 and Bartenders Union Local 165, and withstood illegal anti-union retaliation, intimidation and even physical assault by management. According to the Huffington Post, Donald Trump’s hotel spent over half-a-million dollars on consultants to try to stop employees from unionizing. The unions countered by exposing hotel co-owner Trump as not worker-friendly and called a boycott of all his properties. The victory shows that even up against a rich, powerful, racist enemy, worker solidarity and fighting spirit can defy expectations.

Employees denounce IBM CEO for reaching out to Trump

When news broke that Trump was elected president, people of color, women, immigrants, LGBTQ individuals, people with disabilities and low-wage workers flocked to the streets and social media to express their disgust and fear. But Ginni Rometty, CEO of tech giant IBM, saw only dollar signs. In a Nov. 14 letter, she offered IBM’s solutions to help Trump “advance [his] national agenda.” IBM founder Thomas Watson, who received the Nazi Merit Cross of the German Eagle for collaborating with Hitler’s regime, would be proud. (theguardian.com, Feb. 18, 2001)

IBM workers, however, objected. An online petition signed by current and former employees denounced the idea that IBM would help create a national Muslim registry and asserted “our right to refuse participation in any U.S. government contracts that violate constitutionally protected civil liberties.” The petition also called on IBM to expand diversity programs “targeting women, people of color and LGBT people with the goal of doubling recruitment of these groups in 2017.” As of Dec. 23, the petition had collected over 500 signatures. (ibmpetition.org)

A Dec. 19 Intercept article noted that the IBM petition is similar to the “Never Again Pledge,” signed by about 1,700 tech workers from various companies agreeing to never “participate in the creation of databases of identifying information for the United States government to target individuals based on race, religion or national origin” and to “minimize the collection … of data [to] facilitate ethnic or religious targeting.” (neveragain.tech)

“We are on strike today to send a message that we mean business,” said baggage handler Marvin Lynch on Dec. 14 at Washington, D.C.’s National Airport. The workers at both National and Dulles airports were protesting poverty wages and lack of respect from their contract employer, Huntleigh Corp. Contracted airport service workers are excluded from the airports’ living wage law and earn as little as $3.77 an hour plus tips. Workers are demanding that all contractors pay workers $15 an hour. (dclabor.org, Dec. 15)

Meanwhile, contract workers at the Minneapolis/St. Paul airport won union representation on Nov. 14. Service Employees Local 26, which began organizing them in 2013, will negotiate on behalf of 600 mostly East African contract workers. The union statement noted that their campaign aims to “eliminate Minnesota’s racial economic inequalities“ and is part of the national Fight for $15 movement for contracted airport workers. Now “85,000 airport workers nationwide have won wage increases or other improvements, including health care, paid sick leave and worker retention policies.” (seiu26.org, Dec. 5) For more about this ongoing struggle, see airportworkersunited.org.

A Dec. 21 study by the National Employment Law Project reported there were more minimum wage victories in 2016 than in any year since the Fight for $15 campaign was initiated by fast food and other low-wage workers four years ago. Twenty-five states, cities and counties raised pay for 11.8 million workers in 2016. Workers in another 21 states and cities will receive raises in 2017, and new campaigns are underway for 8 million workers in at least 13 states and cities during 2017-2018. (For detailed data, see nelp.org.)