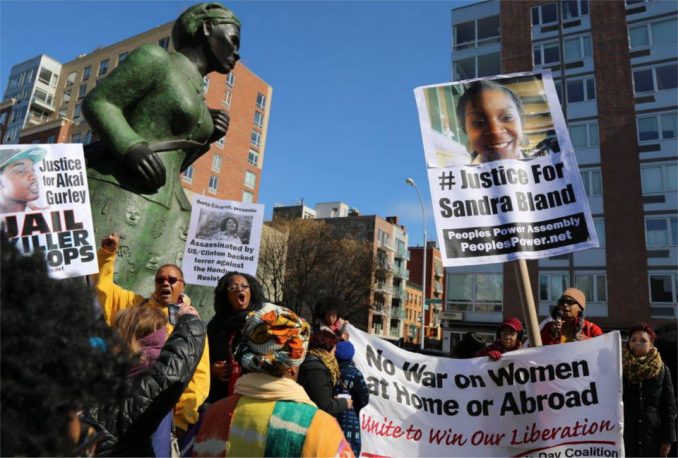 Millions of women were shocked, outraged and disgusted when the extremely misogynistic and racist Donald Trump was selected by the Electoral College to succeed Barack Obama as the next U.S. president. Many of those women had voted for Hillary Clinton, who won the popular vote by nearly 3 million more votes than Trump. The undemocratic nature of how a president in the capitalist U.S. is elected was once again on full display with the Electoral College all but dismissing the fact that Trump lost the popular vote.

The reasons many women voted for Clinton varied from those who viewed her as a “feminist” — that is fighting for the rights of women — to those who wanted to see the first woman become president on the heels of the historic 2008 and 2012 elections of the first Black president.

Let’s go on the record now that Clinton is not and never was a feminist. She is an all-out imperialist — check out her record of interventions in Honduras, Libya, etc., as Obama’s Secretary of State — as well as the candidate that most of Wall Street backed for president.

In the days following the election, tens of thousands of people, many of them women of all ages, spontaneously poured into the streets from high schools, college campuses and workplaces, to protest Trump under the popular Twitter hashtag #NotMyPresident.

Then on Nov. 21, a national press release announced a Women’s March on Washington for Jan. 21, the day after Trump is inaugurated.

‘Defend the most marginalized’

Backed by more than 70 endorsers, including Planned Parenthood, the NAACP, Gloria Steinem and Harry Belafonte, the Women’s March on Washington stated in part: “The rhetoric of the past election cycle has insulted, demonized and threatened many of us — immigrants of all statuses, Muslims and those of diverse religious faiths, people who identify as LGBTQIA, Native people, Black and Brown people, people with disabilities, survivors of sexual assault — [so] that our communities are hurting and scared. We are confronted with the question of how to move forward in the face of national and international concern and fear.” (womensmarch.com)

Organizers continued: “In the spirit of democracy and honoring the champions of human rights, dignity and justice who have come before us, we join in diversity to show our presence in numbers too great to ignore. The Women’s March on Washington will send a bold message to our new administration, Congress, Senate, state and local governments on their first day in office, and to the world that women’s rights are human rights. We stand together, recognizing that defending the most marginalized among us is defending all of us.

“We support the advocacy and resistance movements that reflect our multiple and intersecting identities. We call on all defenders of human rights to join us. This march is the first step towards unifying our communities, grounded in new relationships, to create change from the grassroots level up. We will not rest until women have parity and equity at all levels of leadership in society.  We work peacefully while recognizing there is no true peace without justice and equity for all. HEAR OUR VOICE.”

First called the “Million Woman’s March,” the organizers of the Women’s March on Washington issued an official apology to Dr. Phile Chionesu, an African-American woman who initiated the original MWM, where more than 2 million, majority Black women and other women of color flooded the streets of Philadelphia in 1997 under the broad banner of unity and sisterhood in the aftermath of the Million Man March in 1995.

In early December, J21 organizers announced that permits had been approved by various D.C. agencies for a gathering near the U.S. Capitol at Third Street SW and Independence Avenue at 10 a.m. for a march and rally. Local and statewide Facebook pages have attracted tens of thousands of people mobilizing for the march. Nationally coordinated J21 solidarity protests have also been called for those unable to travel to Washington.

A very important question about the Women’s March on Washington concerns whether or not J21 will be used to try to divert more women into the Democratic Party. Or will this movement really attract the most oppressed and marginalized women? These are the women who are involved in and leading struggles such as the ongoing Fight for $15 and a union; against police brutality and killings; the right to health care including reproductive justice; for housing and quality education; and an end to all forms of sexism and patriarchal attitudes.

One thing is clear: Women of all ages, nationalities, gender identities and expressions, and range of abilities will be descending upon Washington or gathering in their cities on Jan. 21 to be seen and heard, many for the first time, which is a progressive step forward.

The intervention of the left wing of the big-business Democratic Party, which J21 will definitely reflect, makes it all the more important for the progressive political movement to be there in solidarity with the many women who not only want to protest the Trump administration, but who will be interested in building and leading a long-term, independent, multinational, multigender, grassroots movement for real social and economic change.

Moorehead was the 2016 Workers World Party presidential candidate and is a co-coordinator of the International Working Women’s Coalition in New York City.