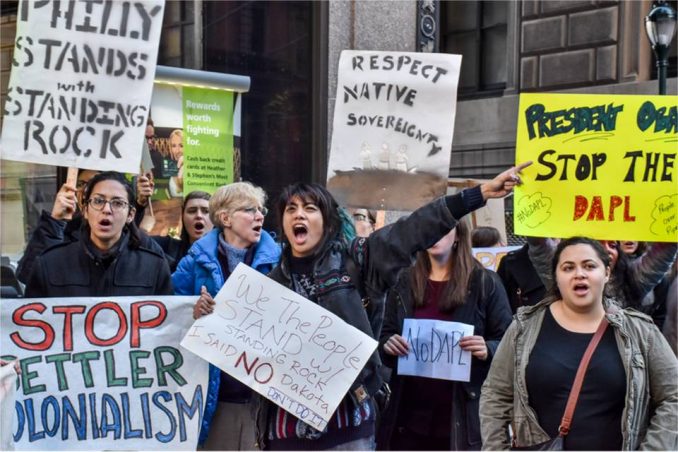 Over 200 people joined a rally and march in Philadelphia on Dec. 1 in solidarity with water protectors and Indigenous warriors at Standing Rock, N.D. The event took place 10 days after police and National Guard violently attacked a peaceful gathering at Standing Rock with tear gas, rubber bullets, pepper spray, concussion grenades and water cannons in subfreezing conditions, injuring hundreds of people. Supporters also came out to oppose the eviction notice from the U.S. Army Corps of Engineers to the Standing Rock Sioux Nation, effective Dec. 5, threatening to “close” all lands north of the Cannonball River, where Oceti Sakowin ancestral and treaty land and the encampments are located.

Demonstrators marched with signs, chants and banners from the hated Rizzo statue in Thomas Paine Plaza to the TD Bank at Broad and Sansom where a group of supporters was blocking the entrance to the bank. They then proceeded past the offices of the Army Corps of Engineers, heavily protected by a line of cops, to a “die-in” at the busy intersection of Market and Juniper next to City Hall. The marchers ended the protest at Thomas Paine Plaza.