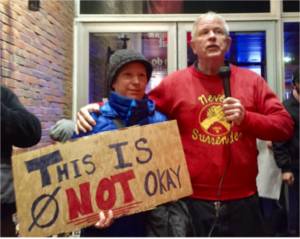 Hundreds of students, university workers, social justice activists and contingents of antifa and other antifascist activists from greater Boston blockaded the doors of the Kennedy School of Government in a cold, dark rain on Nov. 30, outraged that “liberal” Harvard had invited Stephen Bannon, former head of the white-suprem­acist and neo-Nazi Breitbart News, and other Trump “advisers” to a conference.

Protesters viewed the “War Stories: Inside Campaign 2016” discussion as a declaration of war on campus. They came ready to fight. Without a permit and in the face of police, the crowd packed the Kennedy School entrance, chanting, “No Trump, No KKK, No fascist USA!”

Cheers erupted when Tom Arabia and Zachary Lown, two organizers who put the demonstration together in 48 hours, announced that Bannon, a cowardly bigot, backed out last minute in the face of mass opposition.

They called on demonstrators to keep the pressure on Kellyanne Conway, Corey Lewandowski and other Trumpsters inside and to counter the Kennedy School’s dangerous attempt to give legitimacy to racists with continued #HarvardSoFascist actions.

NAACP Boston Executive Director Nia Evans applauded the mostly young, white crowd for coming out in such large numbers to fight racial hatred. Evans told the many new activists to “prepare to be in the streets every day to defend civil and human rights.”

Ed Childs, cook at Harvard for 42 years and leader of Local 26’s recently victorious 22-day dining service strike, said, “The Harvard Corporation needs to immediately rescind their invitation to the bigots and warmongers. This campus belongs to the students, to the faculty, to the workers, and we didn’t invite these fascists here. They need to get off our property, now!”

Nino Brown, of the Answer coalition, reminded people, “At no time in history has fascism ever been defeated by love. Fascism can only be defeated by shutting it down!”

Many #JewishResistance and LGBTQ activists took the mic to denounce the Trump cabal’s Islamophobia, pledging to put their bodies on the line to defend Muslim and migrant sisters and brothers under attack.

Young attorney Jasmine Gomez, a protest organizer, announced the day’s demands to rousing cheers and fists: “1. No normalization of bigotry, no platforms for hate! 2. Fire Bannon! 3. No to the Trump agenda of racial profiling, “law and order” policing, and legalizing anti-women and anti-LGBTQ discrimination! 4. Make Harvard a sanctuary school! 5. Build our movement by standing together against hate!”

Steve Kirschbaum, vice president of United Steelworkers Local 8751 (Boston school bus drivers) and a Workers World Party leader, related Boston’s experience in fighting an earlier generation of white supremacists: “We’re a union that was born in the crucible of fighting fascism and racism. In 1974, we saw the ugly stench of neofascism.

“They called it ‘Restore Our Alienated Rights’ then. That’s bulls–t, as much as calling it ‘alt-right’ now is bullshit. These are Nazis and Klan, and you don’t debate them, you don’t give them a chance, you shut them down!”