October 29 was the 98th anniversary of the founding of the Soviet Young Communist League, or Komsomol. To mark the occasion, Anna Brekhova, leader of the Lugansk Komsomol, spoke about their work today in the Lugansk People’s Republic. Along with Donetsk, Lugansk broke away from Ukraine after the U.S.-backed coup in Kiev in 2014. The Ukrainian government has waged war and imposed an economic blockade against them ever since.

This interview originally appeared at LeftInform.net. It was translated and edited for publication by Workers World contributing editor Greg Butterfield. 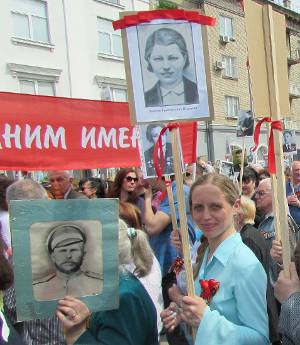 Anna Brekhova at Victory Day parade in Lugansk, May 9.

Anna, for many people the word “Komsomol” is associated with Soviet youth. But no matter how bright the memories of that time are, it’s gone. No Soviet Union, no Komsomol. Or is there?

I would say that the Komsomol familiar to many is no more. It’s no longer a huge organization, which brings together hundreds of thousands of boys and girls. We must understand that in the Soviet times, when the power rested with the Communist Party, its youth wing, in fact, was built into the state system. And the goals and objectives of the Komsomol were appropriate — education, leisure, personality formation — to support the desired course of the party in the future, thus ensuring the continuity of generations.

Today, we do not live in a socialist, but a capitalist world. And it is logical that in any unjust system, there will always be people who will band together to fight for justice and people’s rights. Leftist ideas will never die — regardless of whether the left forces are in power, in opposition or in hiding. But the content, of course, will be different.

In the capitalist world, leftist organizations are associations of like-minded fighters, those who want to change the world for the better, who are ready to act, ready to fight in a variety of conditions. That is the modern Komsomol. It is not about getting any privilege. It unites the single voice of protest with other voices into a powerful force, which is capable of changing something and achieving something.

You speak clearly and correctly, but still there is some sense of dissonance. Are today’s youth even interested in politics? In the age of Instagram and Pokémon Go — what can the Komsomol offer to attract young people to its ranks?

Let’s not forget that young people have always been the most intransigent, the most demanding part of the society. This is common to most young people. Being a perfectionist and, in the words of Che Guevara, demanding the impossible. But at the same time, young people are always modern, if I may say so.

It’s a mistake to believe that a member of the Komsomol in the 21st century is going to be a replica of the young revolutionaries of 1917. Instead of libraries, we have the Internet; instead of books, smartphones; instead of yard games — Pokémon Go, for example. In 1917, the older generation also did not understand young people, considering their hobbies strange.

But in the age of information technology, only the form has changed. It’s not so important where we get information, what kind of music we listen to, and what groups we join on social media. Inside the modern Komsomol are the same kind people, with a keen sense of injustice and the general crisis, people who are alien to the idea of “suffering in silence.”

Anna, your organization works in the LPR. What issues concern young people in the Republic?

Our youth had many problems even before 2014. And since the war, they have not disappeared. On the contrary, they’ve been worsened by war and postwar hardships. Employment, the size of salaries and scholarships, the possibility of buying a home, assistance payments for children, high prices — this is a list of problems that confront young people today.

On the one hand, of course, admission to universities is now better. On the other hand, much of the teaching staff left, and there was no influx of new educators to take their place. It’s logical that this will affect the quality of the educational process. The same with jobs. On the one hand, many experts left the region. There is an urgent need to replace them with young specialists, graduates of universities and colleges. But because of the difficult economic situation of the Republic, some of these young professionals prefer to become migrant workers leaving for Russia.

The two-year-old Republic has very few resources, of course, for public education. As for the last two years of your work — has it been long enough to see results?

I think we can already see certain results. Especially because we have not started our work from scratch. The Komsomol is 98 years old. The Leninist Communist Youth Union of Ukraine became the successor of the Komsomol, and we, in turn, became inheritors of the Ukrainian Komsomol. Thus, we have nearly a century of history and the experience of many generations behind us.

Of course, the last two years were very difficult, but this also made the period doubly valuable to us.

We’ve built our work on two fronts. The first is direct work in the Republic, aimed at alleviating the plight of our fellow countrymen, which they suffer due to the war and economic blockade. So, our organizations throughout the country actively supported the “Books in the Service of Peace” campaign, during which we collected several thousand books and textbooks. We handed them over to school libraries in Lugansk and other cities of the Republic.

In the spring, we always carry out the traditional voluntary work, landscaping parks, planting trees along the avenues, taking care of the monuments of Soviet history. In the period of active hostilities, Komsomol members helped with the delivery of humanitarian supplies and their distribution, and collected aid for the purchase of medicines for seniors and low-income residents.

We realize that the lion’s share of our region’s problems cannot be solved here, from inside. While the Minsk peace process is unfinished, while the truce is constantly violated by Ukraine, and the Republic is under siege — a lot will depend on the work of our representatives in the international arena. And this is connected to the second area of our work.

We are doing everything possible to break through the information blockade around Donbass and bring the truth about our life to the world. For example, I recently had the opportunity to tell the participants of the Office for Democratic Institutions and Human Rights conference about how the civilians of the Republic survived when they came under shelling during the active phase of hostilities in Donbass. This year we are holding the action “Children of Donbass Write for Peace,” in which letters in defense of peace from the youngest residents of Donbass will be brought to the United Nations.

In 2015, the Komsomol was one of the organizers of the Donbass International Forum, “Anti-Fascism, Internationalism, Solidarity,” which was held in Alchevsk. In addition, we have established and maintain an active relationship with the youth organizations of the left in Russia and Europe. We welcome their representatives and send our delegations to meet and work together.

And what can you say about the immediate tasks that you set for yourself? What are your plans?

We will finish the current campaign to collect children’s letters and give them to the U.N. And on our agenda is the work of the Organizing Committee for the participation of our delegation to the Sochi festival, which the World Federation of Democratic Youth will hold in 2017. At the festival, we are planning to raise the issues of youth in the unrecognized republics. We have already submitted the relevant proposals to the organizers. And, of course, we must celebrate the coming anniversaries — the anniversary of the Young Communist League and the Great October Socialist Revolution.

By the way — how will the Komsomol celebrate the anniversary of your organization?

We have planned a number of activities. Solemn meetings will be held in major cities of the Republic, dedicated to the history of the Komsomol movement. It will be a meeting of Young Communists of different generations — from the period of the Great Patriotic War up to the present.

We also plan to hold a video conference with friends from Russia, Ukraine and Europe. They, too, will be celebrating this date — of course, under different conditions. We cannot compare the almost underground situation of the Komsomol in Ukraine today with the situation of their comrades. But including them in this day is important for us, to share words of encouragement, to experience our unity. After all, in all different countries, we have one great common cause.