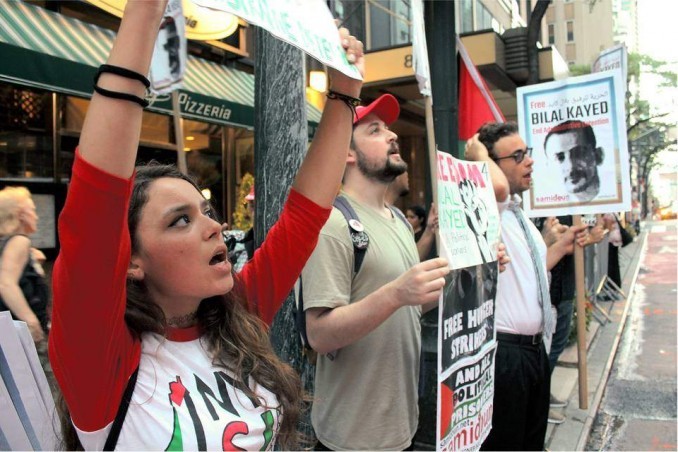 Palestinian political prisoner Bilal Kayed ended his 71-day hunger strike Aug. 24 after securing an agreement that Israel will free him when his current “administrative detention” order, issued by an Israeli military commander in the occupied West Bank without charge or trial, ends on Dec. 12.

The deal, announced by Kayed’s party, the Popular Front for the Liberation of Palestine, and his legal counsel, the Addameer Prisoner Support and Human Rights Organization, confirms that Kayed’s detention will not be renewed.

At a Ramallah press conference on Aug. 25, Addameer director Sahar Francis said an Israeli occupation spy agency had demanded Kayed’s deportation outside Palestine for four years as a condition of his release.

Only two days before the agreement, “the Israeli intelligence was adamant about this condition.” (addameer.org)

Kayed had previously been imprisoned by Israel for 14 ½ years for participating in resistance activities during the second Intifada.

On June 13, the date of Kayed’s scheduled release, Israel refused to free him, instead giving him an “administrative detention” order.

In response, Kayed launched a hunger strike June 15 to demand his release.

On Aug. 23, the night before the settlement, supporters gathered at the Manhattan Solidarity Center to hear reports from two local activists who recently traveled to occupied Palestine and met with Kayed’s relatives and supporters, and to write him letters of solidarity.

These demonstrations sharpened in militancy as Kayed’s hunger strike progressed, with protesters marching loudly through the lobbies of G4S buildings on Aug. 12 and 19.

G4S: Out of Israel’s prisons!

On Aug. 7, Kayed and other prisoners affiliated with the PFLP, many of whom were then waging hunger strikes in solidarity with him, issued a statement urging supporters to escalate an ongoing campaign of boycotts and divestments against G4S.

“We call on the Boycott National Committee to issue an immediate alert to all of the boycott and Boycott, Divestment and Sanctions committees in the world to take up the campaign to defend the prisoners through the international boycott of the occupation and its institutions, and boycott of its complicit corporations, led by the G4S security corporation,” they wrote. (pflp.ps)

After G4S first announced its plans to abandon the Israeli market in March, BDS activists welcomed the move.

But Mahmoud Nawajaa, a spokesperson for the Palestinian BDS National Committee, stated, “Our boycott of G4S will remain among the BDS movement’s top priorities until we actually see it back out of the door of Israel’s regime of occupation, settler-colonialism and apartheid.” (bdsmovement.net)

Efforts to free them and drive G4S out of Israel’s prisons will continue, starting with Samidoun’s next weekly protest on Sept. 2 at 4 p.m. outside the G4S office at 19 West 44th St.

Announcements and reports of events elsewhere, as well as news on hunger strikers and other Palestinian political prisoners, are posted online at samidoun.net.