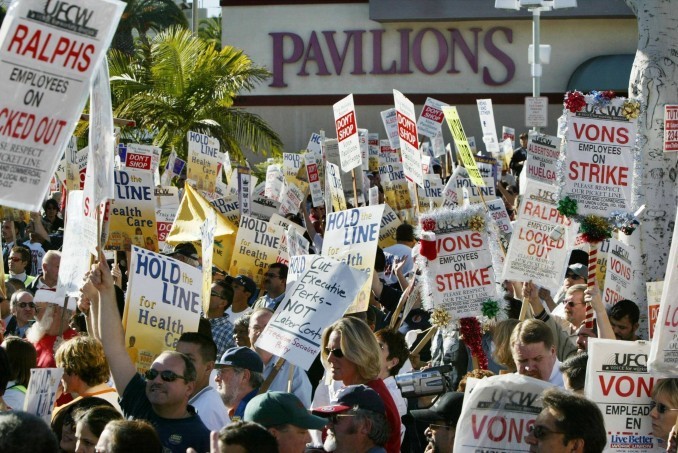 About 147,000 grocery workers, repre­sented by the Food and Commercial Workers (UFCW), have been fighting for contracts from coast to coast. This roundup of their struggles for living wages and decent benefits shows it pays to unite and fight.

Some 30,000 grocery workers in the Puget Sound area of Washington state ratified a three-year contract on April 28. The new contract for Locals 21 and 367 and Teamsters Local 38 included improved wages, especially for those moving up the wage scale; increased funding for a high-quality, low-cost health plan; secured pensions into the future; and introduced transfer and promotion rights. After forming a united front in 2013, the three union locals have built strong partnerships with community organizations to stop nonunion grocers and support a statewide raise in the minimum wage.

About 35,000 “Stop & Shop” workers in five UFCW locals in Connecticut, Massachusetts and Rhode Island joined together in late February to bargain against concessionary demands, including benefit cuts and sharply reduced wages and benefits for future hires. On May 20, they voted in a decent contract with no concessions, though they didn’t get everything they wanted.

On May 18, 35,000 members of UFCW Local 400, who work at Kroger in seven states stretching from Maryland to Tennessee and the District of Columbia, voted to strike at 41 stores in the region. Kroger quickly came back with better contract terms, which union members ratified on June 8. The four-year contract includes higher starting pay, raises for department heads and both full-time and part-time clerks, retiree health care through June 2017 and decent health care benefits. That’s the power of the strike threat!

Some 47,000 grocery workers in seven southern California UFCW locals voted to authorize a strike on June 21 against Ralphs, Albertsons, Vons, Pavilions and Safeway stores. Three months after the contracts expired, the companies presented their economic package. It included an inadequate wage proposal; reduced benefits, such as a big increase in employee health care costs; and a “decimated” pension plan. Entry-level employees would have to work longer before reaching higher pay grades. No strike date has been set. Talks will continue.

Union officials said the grocery chains want to cut costs in anticipation of the state minimum wage rising to $15 an hour by 2020. Now the starting salary is $10.10 an hour. Union president Mickey Kasparian noted that the strike vote “may create a leverage point for us. … We want to get to a resolution.” (San Diego Union-Tribune, June 20)

Workers at Vons, Albertsons and Ralphs were part of a historically long 141-day strike in 2003-2004. Miro Copic, a marketing lecturer at San Diego State University, told the San Diego Union-Tribune the last strike helped push consumers to nonunion alternatives. At that time, the chains had more than 50 percent of the market share. Now, it’s about 30 percent, with 30 new grocery stores opening in San Diego County by the end of the year. “A protracted strike can create more problems for these chains,” he added. “That’s the last thing they want at this point.” (June 20) Stay tuned.