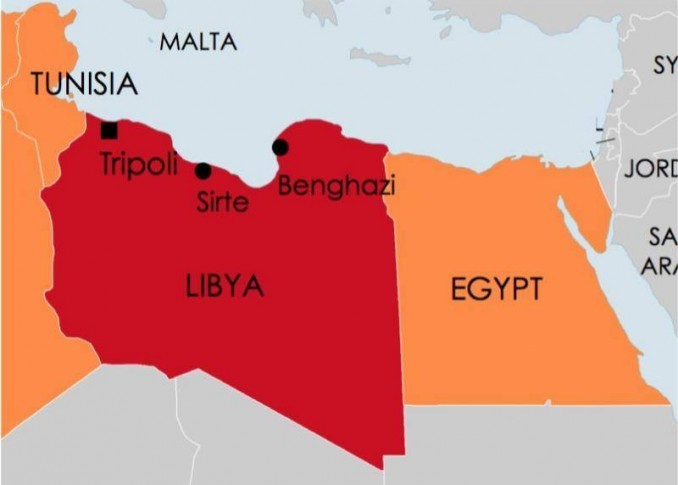 Fighting for control of the western coastal city of Sirte, Libya, has increased the flight from the embattled North African state. Five years ago, the country was targeted for regime change by the CIA, Pentagon and NATO.

Sirte is the hometown of former leader Col. Muammar Gadhafi, who was assassinated while fleeing imperialist bombs in October 2011. Since 2015, the Islamic State group (IS) has controlled the city and other areas across the Mediterranean Sea’s western coast.

IS’s presence in Libya accelerated after the U.S., Britain, France and Russia bombed their positions in Syria and Iraq. Forces loyal to the United Nations-imposed “Government of National Accord” have laid siege to the city to drive out IS.

Anti-war.com reported June 19 that GNA spokesman Reda Issa said the focus was to “‘bolster positions’” outside Sirte and “‘provoke ISIS fighters to come out of hiding.’” IS reportedly has 5,000 fighters in Libya, with many in Sirte. “Given the unity government’s forces mostly consist of the Petroleum Facilities Guard [PFG], which was never built for offensive operations, it is unsurprising that the offensive isn’t the quick mop-up it was initially suggested to be.”

These heavily armed fighters have taken some territory away from IS in Sirte, but the Islamists remain dug into their positions, slowing the drive to force them out of the area and break their main base in Libya’s central-western region. Some 80 percent of the country’s oil reserves are located under the Sirte basin.

Militias from Misrata are trying to oust IS. These militias were notorious for their violence and racism during the war of regime change.

Despite endorsement by U.S. and European Union imperialists, the GNA junta has generated controversy among the two rival regimes and other factions vying for control of Libya.

War for oil rages in the east

PFG spokespeople say the oil installations were not threatened, but PFG was prepared to prevent a serious attack. This fighting followed clashes between the BDF and the U.N.-backed GNA Libyan regime.

BDF rebels were defeated by militias loyal to Khalia Haftar, the renegade general under Gadhafi who later worked for the CIA. He was flown back to Libya from Virginia in 2011 to lead the imperialist-supported counterrevolution. His forces have clashed with rebels for two years, including some in IS.

On June 18, the BDF clashed with militias loyal to the eastern government in Ajdabiya. The rival regime based in Tobruk, the House of Representatives, is not supporting the GNA headquartered in Tripoli. The Tobruk regime has had conflicts with the General National Congress faction in Tripoli, too. At present two different National Oil Corporations claim to be legitimate controllers of petroleum resources in the country.

Libyan oil production has dropped off considerably from the 1.6 million barrels per day under Gadhafi’s Jamahiriya government. For years, Libya was the most prosperous state in Africa, but it now produces less than 400,000 barrels daily, leaving the country scrambling for foreign exchange, amid declining oil prices.

Meanwhile, hundreds of Libyans are dying attempting to cross the Mediterranean Sea to reach Europe. Over 52,000 people have made the journey this year. Many subjected to the worst treatment by human traffickers and militias occupying Libya are migrants from West Africa.

The June 17 British Guardian newspaper said, to reach the sea, West Africans “had to survive a horrific journey across the Sahara. If they don’t fall off the back of the smugglers’ pickup trucks, passengers are often kidnapped or beaten or die of dehydration.” Their worst experiences come from inside Libya, which “has become a hell on earth for migrant workers. … Migrants have become easy prey for kidnappers and militias looking to raise money through ransoms, businessmen looking for slave labor and smugglers looking for passengers to exploit.”

The imperialist war and its aftermath created chaos, turning Libya into a major source of African and even European instability. EU governments controlling points of entry for refugees are seeking to halt entry into their countries. Resistance to refugees from Africa, the Middle East and Asia has strained relations between southern and eastern European states and those in the north and west.

Negotiations have occurred with Libya’s fractured regimes and NATO-member Turkey to prevent or return migrants who enter EU countries. In Europe, these oppressed refugees face institutional racism, xenophobia and violence from security forces and far-right vigilantes.

The migrant crisis is a major international issue, yet it remains absent from the discourse surrounding U.S. electoral politics and foreign policy. The U.N. Refugee Agency and other humanitarian organizations say the displacement crisis is worse than ever since the end of World War II.

The World Health Organization stated on June 20, designated “World Refugee Day,” that 75 million international migrants are living in Europe, some one-third of all migrants worldwide. The crisis has escalated rapidly, and “Europe has experienced this acutely.” Over 1 million refugees arrived in Europe in 2015 alone, and over the first five months of this year, 200,000 more migrants have arrived on European shores and its borders.