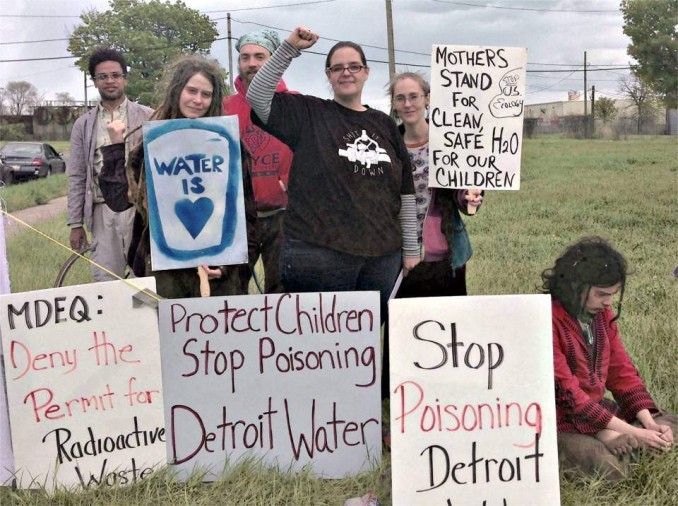 Protest against fracking waste expansion in Detroit neighborhood, May 8.

Detroit residents and community activists have been organizing since last year to oppose the increased processing and dumping of hazardous and radioactive fracking waste at a US Ecology facility in their neighborhood. On May 18, members of the Coalition to Oppose the Expansion of US Ecology (COE-USE) joined with other activists at a demonstration at the main office of the Detroit Water and Sewerage Department. They opposed the dumping of fracking and other industrial waste liquids into Detroit’s sewer system while also demanding a moratorium on residential water shutoffs.

USE operates several hazardous waste processing facilities in Detroit. The company has requested a permit from the Michigan Department of Environmental Quality to increase tenfold the processing and disposal of radioactive and carcinogenic fracking waste at its US Ecology North facility, which is located in the middle of Detroit at 6520 Georgia St.

At a meeting with community activists on May 11, MDEQ representatives stated that they anticipate approving the permit on Oct. 1 because what USE wants to do is legal. This is the same state agency that played a major role in poisoning the water and the people of Flint. This is the same MDEQ that has allowed southwest Detroit to be the most polluted zip code in Michigan for decades, despite strong and vigorous opposition from residents. Many Detroiters have no confidence in the MDEQ, and, in fact, accuse it of a pattern of environmental racism.

The fracking waste is composed of a cocktail of poisonous “proprietary” or secret chemicals mixed with sand and water that is used to hydraulically fracture underground shale deposits containing oil and natural gas. The sand and water solution is injected into the shale under high pressure, hydraulically fracturing the rock and releasing the trapped oil and gas. The sand and water that return to the earth’s surface have picked up an unknown mixture of metals and radioactive compounds and this frack waste must be disposed of.

The fracking industry is exempt from the legal requirements of the Safe Drinking Water Act of 1974, due to the passage of the “Halliburton” loophole of the 2005 National Energy Act. This loophole, engineered by then Vice President Dick Cheney, exempted the oil and gas industry from environmental regulations and resulted in a huge increase in fracking and subsequent pollution of water resources wherever fracking has occurred.

Currently, USE Detroit North is permitted to discharge 300,000 gallons of toxic chemicals and metals such as cadmium, cyanide and lead into the public sewer system. According to a fact sheet issued by COE-USE, “USE has not only requested … to process and store ten times this amount, they are also requesting [dumping] a nightmare of new hazardous chemicals” at the Detroit facility.

The Great Lakes Environmental Law Center, in a statement issued on Sept. 11, warned: “The sheer volume of storage for new waste and the number of new chemicals proposed to be handled and stored in connection with the expansion of this facility … is staggering. Many of the hazardous waste chemicals … are known human carcinogens such as arsenic, benzene, and vinyl chloride. Others like dioxin and phthalates have potential to disrupt human hormonal processes, affect the reproductive system, and cause immune system problems. In short, the hazardous wastes accepted at this facility are the worst and most dangerous known to [humanity].”

Recognizing the weaknesses of Environmental Protection Agency and MDEQ regulations, COE-USE has written a letter to Dr. Abdul El-Sayed, executive director and health officer of the Detroit Health Department, requesting that he block the requested USE permit on public health grounds. The letter, authored by Diane Weckerle, stated in part: “When I worked as a public health nurse in the Childhood Lead Poisoning Prevention Program of the Detroit Health Department, every zip code was considered high risk due to the age of the homes. And every child had an elevated lead level. The harm this causes a child’s ability to learn, their health and their behavior is well documented. We’ve learned more recently that this harm can affect DNA and future generations. The legacy of lead poisoning and the infrastructure of water pipes must also be considered before allowing more toxins into the environment.”

The next demonstration in opposition to the USE expansion will take place on May 26 at 4 p.m. at the MDEQ Detroit office located at 3060 West Grand Blvd.