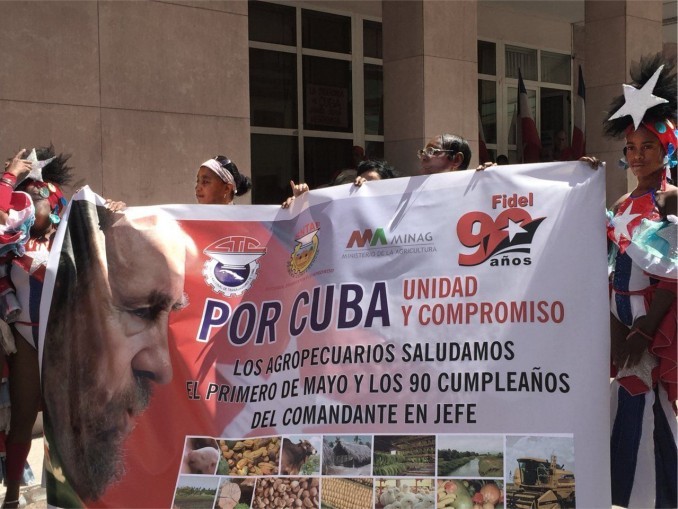 Havana, Cuba — Some 2,000 international guests celebrated May Day 2016 here and witnessed the massive support of Cuban workers for their revolution. In the  capital and throughout Cuba they marched with the theme “For Cuba: Unity and Commitment.”

The guests were not in Cuba just to watch. The next day they filled the convention center at the May 2 International Solidarity Conference to participate in the fight to repel the renewed imperialist offensive in Latin America — from Argentina to Brazil, Venezuela to Honduras and to Cuba itself. Reports that day demonstrated that on every continent Cuba represents a socialist beacon for human development.

Most importantly, the discussion made it clear that the U.S. economic, financial and commercial blockade of Cuba is still very much in place. That dispelled any possible confusion left by President Barack Obama’s recent visit to the island.

The conference agenda heading was “Why we will not forget history.” This directly responded to Obama’s appeal to look to the future and forget the past.

A panel speaker from Venezuela reported that U.S.-backed destabilization is in full swing there. Others described that Brazil is in the throes of a corrupt “soft” coup via impeachment of the Workers’ Party government. In Argentina, the election of President Mauricio Macri thrust 150,000 workers into unemployment.

Meanwhile in Honduras a new mass organization named for assassinated Indigenous leader Berta Caceres is uniting all social movements against the U.S.-backed coup regime and its neoliberal program. The Honduran speaker urged delegates to return home with the slogan “Berta Caceres didn’t die, she multiplied.”

In the floor discussion Uruguayan Leonardo Batalla, representing the Encuentro Sindical Nuestra America, pointed out the need to fight for power, not just electoral victories.

Kenia Serrano Puig, president of the Cuban Institute for Friendship with the Peoples (ICAP), highlighted the need to strengthen the struggle against the blockade by using what was learned in the successful struggle to free the five Cubans unjustly imprisoned by the U.S. for fighting anti-Cuba terrorism.

She urged united actions against the blockade on the 17th day of every month and continued efforts to reach the U.S. Congress. Examples of important U.S. protests were the September 2015 and April 2016 Days of Action in Washington, D.C., which were mentioned by the Cuban Deputy Foreign Minister.

Serrano said socialism is solidarity and renewed commitment to oppose imperialist hegemony and colonialism. She cited examples of supporting Palestine, the independence struggle of Puerto Rico and freedom for Oscar López Rivera.

There were speakers from Haiti, India, Barbados, Palestine, the French General Confederation of Labor, the Nigerian Labor Congress, the World Federation of Trade Unions — who saluted Fidel Castro’s 90th birthday — and from Sri Lanka’s United People’s Freedom Alliance, the Vancouver, Canada, Communities in Solidarity with Cuba and UNITE the Union from Britain.

Solidarity from the U.S.

Mothers and families of victims of police brutality in the United States addressed the terror faced by Black and Brown communities there. Juanita Young, mother of Malcolm Ferguson, whom cops killed in March 2000, explained that she came to Cuba because she heard about the Cuban 5; she wanted to meet their mothers, who had fought so tirelessly for their freedom. Young said, “If I had lived here, maybe my son would not have been murdered. I would still have my son if I was living in Cuba.”

The mothers included Detroiter Arnetta Grable, whose son Lamar Grable was killed in 1996 by three-time killer cop Eugene Brown. The mothers raised banners in the hall.

At least 50 elected union representatives from the U.S. joined the May Day celebration and solidarity conference. These included a majority of the Maryland/DC AFL-CIO executive board, who were primarily African Americans. Fred Mason, president of the Maryland/DC AFL-CIO, spoke from the podium on behalf of U.S. workers and called for ending the U.S. blockade and solidarity with the Cuban labor federation.

The strong U.S. labor presence at 2016 May Day signals an opening for labor’s voice to be heard to end the U.S. blockade, return the Guantanamo naval base to Cuba and end regime-change programs funded by U.S. tax dollars, including illegal TV, radio and internet broadcasts. Also needed is ending all U.S. restrictions on travel to Cuba and recognizing the self-determination of the Cuban people to continue their socialist course.

As long ago as 1994, the American Federation of State, County and Municipal Employees’ International Convention passed a resolution calling on the Bill Clinton administration and Congress to examine U.S. policy toward Cuba “with a view to achieving normalization of relations between our two nations.” (tinyurl.com/hcc9srq)

At the time, the U.S. government was behind a bombing campaign of Cuban hotels and restaurants to stifle expansion of tourism — a key area at the time for Cuba to earn currency through trade. Washington used CIA-trained agents like Luis Posada Carriles for anti-Cuba terrorism.

When a 1996 overflight of Cuba by the so-called Brothers to the Rescue — supporters of anti-Cuba actions — provoked the shooting down of two of three small planes, President Bill Clinton used that as a pretext to sign the Helms-Burton Act that codified major provisions of the blockade of Cuba into law.

The representative from Barbados told the Solidarity Conference that Posada Carriles — who was behind the 1976 mid-air bombing of a Cuban passenger plane, flying from Barbados, that killed all 73 persons aboard — enjoyed protection in Miami. Since Posada Carriles had not been brought to justice, the Cuban 5 were sent to Miami to monitor possible terrorist activity. They were arrested in Miami in September 1998.

Except for the International Longshore and Warehouse Union, which supported the Cuban revolution, starting from its first delegation to the island in 1960, few unions officially supported the movement to free the Cuban 5. Through international labor solidarity, however, the leadership of some major unions finally began to allow outreach to its members about the Cuban 5 through literature and information tables at conventions. The return of three of the Cuban 5 — Gerardo Hernandez, Ramon Labanino and Antonio Guerrero on Dec. 17, 2014 — was key to normalized U.S.-Cuban diplomatic relations called for by AFSCME in 1994.