A revolutionary movement was born in 1966 in the tiny Alabama community of White Hall, Lowndes County — population 831. Local activists and members of the Student Nonviolent Coordinating Committee formed the Lowndes County Freedom Organization, an independent Black political party. The LCFO was known locally as “the Black Panther Party” for its ballot symbol. Later, some of the SNCC members founded the Black Panther Party for Self-Defense, the Black nationalist and socialist organization anchored in California, with a name, symbol and inspiration drawn from Alabama roots and resistance. 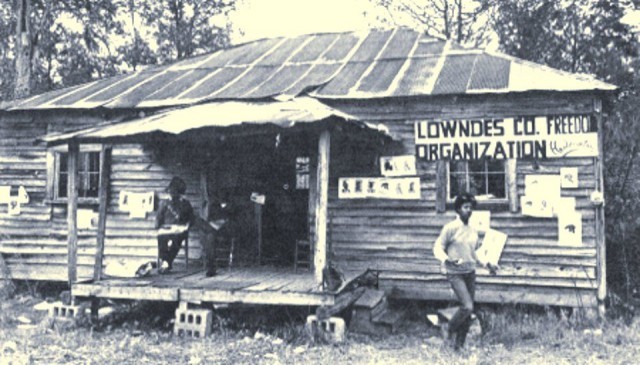 Fightback in Lowndes County by oppressed peoples has a long history. From 1800 through the 1830s, the Creek Nation waged a fierce battle to stop the seizure of their land by white colonizers. As slavery and white supremacy became the law of the land, resistance continued.

In 1861, in Lowndes and Montgomery counties, a hundred enslaved people of African descent, together with “poor whites of the country,” planned a rebellion to redistribute the “land, mules and money” of plantation owners. Twenty-five Black and four white insurrectionists were executed when their plot was discovered. (Herbert Aptheker, “American Negro Slave Revolts,” International Publishers, 1943)

In the 1930s, the Sharecroppers Union, organized primarily by the Communist Party USA, led 6,000 members in Lowndes, Macon, Montgomery and Dallas counties. In 1935, the SCU conducted a spring cotton choppers’ strike and a summer cotton pickers’ strike to end starvation wages of $4 a month and stop workers from being evicted as mechanized farming took hold. Demands included equal pay for women and no discrimination against Black people.

Repression in Lowndes County was brutal, with floggings, rapes and assassinations of union organizers and supporters. However, “armed strikers organized their own ‘posses’ and in one instance a group ‘met the vigilantes as they started to raid a striker’s shack. When the [boss’s] gang saw the opposition was formidable, they ran.’” (Robin D.G. Kelley, “Hammer and Hoe: Alabama Communists during the Great Depression,” University of North Carolina, 1990)

The long tradition of resistance continued into 1966. On the night SNCC called the first voter registration meeting in Lowndes County, a room full of Black farmers showed up — armed. When told that SNCC was “a nonviolent organization,” an older farmer replied, “You turn the other cheek, and you’ll get handed half of what you’re sitting on.“ (Kelley)

Black women were at the heart of civil rights work in Lowndes County. Gardenia White of White Hall was the lead plaintiff in White v. Crook, a landmark case that strengthened the Civil Rights movement and was a cornerstone of the developing women’s liberation movement.

The case was filed to put Black people on the jury rolls and then expanded to challenge a law that kept all women from serving on Alabama juries. Jury selection became a movement focus after all-white juries acquitted white supremacists of murdering Viola Liuzzo and Jonathan Daniels, white civil rights workers, in Lowndes County.

White and the other plaintiffs won in 1966. The historic White v. Crook suit was one of the first brought to end the systematic exclusion of Blacks from jury service. It also became the first U.S. case in which “a federal court relied on [equal protection in] the 14th Amendment to rule a state law unconstitutional because of sex discrimination.” (Dr. Susan Mallon Ross, “Dialogic Rhetoric,” tinyurl.com/zjjkzvw)

Another landmark victory was won in 1968 on behalf of Black teachers being denied tenure and job benefits in Alabama. Teacher Dorothy Hinson of White Hall, who initiated the suit, belonged to the activist Jackson family and was the sister of farmer Matthew Jackson, who provided housing, support and arms to SNCC workers in Lowndes County. (­tinyurl.com/z9z6ahf)