Charleston, W.Va., April 8 — Many in West Virginia and eastern Kentucky were dismayed when news came that notorious Massey coal baron Don Blankenship would face only a maximum of one year in prison for his role in the Upper Big Branch Mine disaster. Blankenship was not even charged with the murder of the 29 miners, but rather “conspiracy to willfully violate mine health and safety standards.” (more at “Coal Mine Boss found guilty of conspiracy”) 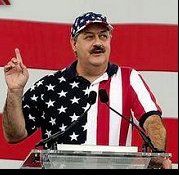 Critical observers have expressed doubt that he would see any jail time, due to the long history of a lack of punishment for capitalist coal barons who put profit ahead of human well-being. However, Blankenship’s crimes and cavalier attitude toward the lives of workers were so egregious that he was, in fact, sentenced to a full year in prison and forced to pay a $250,000 fine. The federal prosecutor recommended this sentence, which is the maximum possible for this misdemeanor.

The day after the verdict, Blankenship’s million-dollar attorneys filed a notice of appeal on his behalf. They say they are confident that the decision will be overturned. Currently, it is not known when he will be required to report to prison.

After the verdict, Blankenship told the Charleston Gazette-Mail: “There was no direct evidence I committed a crime. I am not guilty of a crime.” Instead of owning up to his crime and being eternally grateful that he’s getting off easy, Blankenship continues to mock workers and their families.

Capitalism: a law for rich, another for poor

It’s a scathing indictment of the capitalist system, and the state that protects it, that a millionaire who killed 29 people was given a mere slap on the wrist while Black and Brown youth are being locked away for decades over minor drug offenses — and when released, cannot get a job due to their record. Blankenship has no such difficulties ahead of him. He has amassed a fortune robbing the working class of the products of their labor. His net worth is rumored to be in the hundreds of millions of dollars. In West Virginia, even in the rare instances where the federal government might consider a criminal coal boss liable, the barons can get away with mass murder if they write a big enough check.

Outside the courtroom, the people let Blankenship hear their righteous indignation. “That man has no remorse,” said Tommy Davis, who lost his son, nephew and brother in the explosion.

“He’s standing up there, and he’s hugging them people. I don’t hug nothing but a damn tombstone. I hold a picture. I don’t get to hold no grandchildren.”

“I miss my family. He hugged his, and all he gets is a year,” local media outlet WSAZ reported Davis as saying. “They need to be stricter, more harsh penalties for people like that who puts greed — money — over human life.”

Union member and organizer with the Appalachian Workers Alliance, Ethan Young, commented: “I pray that Blankenship’s cellmate is one of the countless miners who broke his body in those mines and became addicted to pain pills while trying to cope with the painful existence he endured for the profit of the Coal Baron.”

That Blankenship is able to walk away from this with his pockets only a little lighter is an indictment of the system, proof that the political establishment and their courts can’t deliver justice for West Virginia’s working class. The only way forward is the seizure of state power and the means of production by the working class. We must build a new system — a democratically planned economy where all property is collectively owned by the working class and all labor is directed at fulfilling people’s needs, instead of making profits for a small minority of millionaires and billionaires.

Stephen Pearson, an organizer with the Appalachian Workers Alliance, contributed to this article.