Activists from the Baltimore Peoples Power Assembly and the Baltimore Southern Christian Leadership Conference marked the anniversary of Trayvon Martin’s death with a protest and rally at the corner of Pennsylvania and North avenues. The site had been ground zero for an uprising in Baltimore after young Freddie Gray sustained fatal injuries while being transported in a police van. 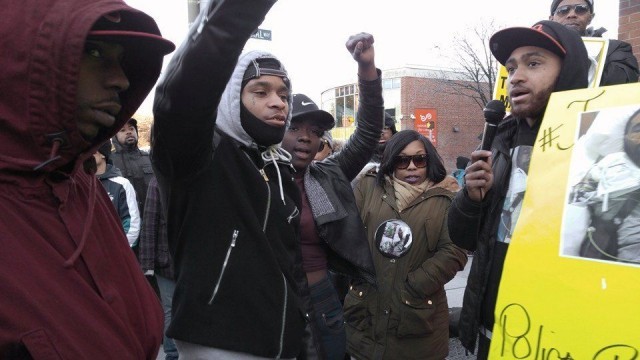 The rally turned into a call for justice for Aaron Winston. Winston is a 24-year-old longshore worker who was brutally beaten by police and later arrested at the Power Plant Live, a night club and tourist destination in Baltimore’s Inner Harbor.

While attending a birthday party, Winston had asked police why his brother was being arrested. The police put him in a chokehold and beat him so badly that his arm was broken in several places and his rotator cuff torn. He had to have surgery and metal screws to repair his right arm. Right after surgery, Winston was transferred from the hospital to the notorious Central Booking Jail, where he was denied pain medication despite protests from his family. Winston’s family attended the rally and both his brother and father spoke out.

ShaiVaughn Crawley, a Baltimore activist who chaired the rally, pointed out the hypocrisy of Baltimore City Police Commissioner Kevin Davis, who has stated that people should intervene when they see police acting brutally. Crawley explained that any encounter with Baltimore police could become deadly.

The Rev. C.D. Witherspoon, a PPA organizer and president of the Baltimore SCLC, drew the connections between the death of Trayvon Martin and the treatment of Aaron Winston.

Youth from Freddie Gray’s neighborhood took the microphone to speak out, at times calling out to the large crowd of police who came to monitor the event, pointing out individual cops who had brutalized the neighborhood.