Israeli Prime Minister Benjamin Netanyahu’s expansionist policies can be seen in Israel’s widening hold on the West Bank. On Feb. 2, Israeli soldiers razed 23 Palestinian homes in the South Hebron Hills, dispossessing 100 people, in the largest single demolition in 10 years in the Occupied Territory. The Electronic Intifada reported that 900 more Palestinians could lose homes in eight villages, many impoverished. (Feb. 7) 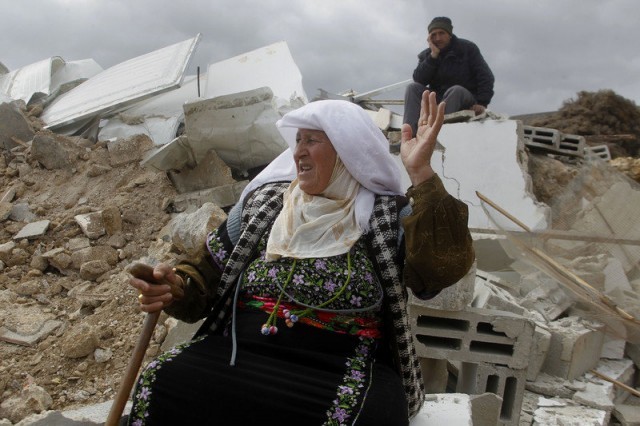 Israel claims “national security” as it forces Indigenous people out of their houses and off their land. Last year, the Zionist government destroyed 521 West Bank structures, leaving 636 people homeless.

Yet, global pressure is increasing on Israel, demanding an end to the Zionist state’s occupation of the West Bank and closure of the settlements and businesses there. The burgeoning Palestinian-initiated “Boycott, Divestment and Sanctions” movement is having an impact — and infuriating Netanyahu’s government.

In November, the European Union ruled that goods produced in the Occupied Territories, Golan Heights and East Jerusalem must be labeled “Made in settlements.” In January, the United Methodist Church pension board was the latest entity deciding not to invest in Israeli banks.

Amidst these developments, some New York Times readers may have been shocked on Feb. 2 when they opened up the newspaper and found that its pro-Israel stance had drastically changed. That’s because a four-page parody edition of the publication was produced by progressive Jewish organizations sympathetic to the Palestinian people. Its slogan was “All the news we didn’t print.”

Above the newspaper’s logo appeared this blurb: “Rethinking Our 2015 Coverage On Israel/Palestine — A Supplement.”

Volunteers distributed 10,000 copies of the lookalike edition throughout New York City. Printed by the New York chapter of Jewish Voice for Peace and Jews Say No!, the aim was to expose Israel’s violations of international law and Palestinian human rights and to criticize U.S. support for Israel.

Organizers also emailed journalists across the U.S. on Feb. 2 under the Times’ name, linking to a website displaying a facsimile of the newspaper’s website. It was removed later that day. However, activists set up an alternative site, so the replica can be viewed at ­tinyurl.com/htyhuh6.

A front-page illustration shows the annual U.S. gift of $3.1 billion to Israel. One article tells of a Nobel Prize awarded to a Palestinian village. Two others are titled “IDF Generals Blame Israeli Government for Recent Violence” and “Congress to Debate U.S. Aid to Israel.”

A satirical editorial portrays the Times admitting that a disproportionate number of its articles center on Israelis’ viewpoints, while only a few cover Palestinians’ experiences and opinions. A correction reads, “Past articles fail to include the names of Palestinians killed by Israeli forces.” A list follows with the names and ages of 165 Palestinian children and adults killed by the Israeli army or settlers since October. Their names do not appear in U.S. newspapers, while Israeli deaths are often covered.

Activist Jane Hirschmann explained that the two organizations wanted to tell the truth about Israel’s brutal occupation of Palestine and expose Israel as an apartheid state. They also intended to show the pro-Israel bias of not only the Times, but the U.S. media in general.

“We’re saying that after 67 years of violence, of stealing people’s homes, people’s water, not letting them cross a border, having checkpoints to go to work, not getting to hospitals, that this is violent,” stressed Hirschmann. “People don’t know that our government is complicit, [giving] $3 billion a year to Israel, [not] for social services, education, or research; we give it to them for military reasons. It’s the largest contribution [the U.S.] makes to any country in the world. So we’re funding the occupation.” (democracynow.org, Feb. 3)

The Times’ replica contains fake ads, too. Headlined “The Perfume of Power Eau de I.D.F. Skunk,” one states: “Since 2008, the Israel Defense Forces have routinely sprayed ‘toxic skunk water’ on and into Palestinian homes and schools. Its smell has been described as ‘worse than raw sewage’ and ‘like a mixture of excrement, noxious gas and a decomposing donkey.’” The IDF also sprays this concoction to disperse demonstrations.

Some articles are real, portraying what would be truthful coverage. The publication also has genuine quotes from the bellicose Netanyahu: “At this time we need to control all of the territory for the foreseeable future.” and “We will live forever by the sword.”

But the Palestinian struggle will not be stopped. The BDS campaign will continue — no matter how fierce the intimidation from Israel and its U.S. ally. The world’s people support the courageous Palestinian people in their determined fight for sovereignty and freedom.