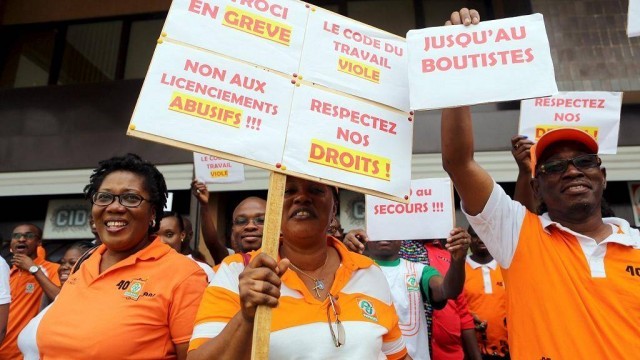 Hundreds of oil workers from a state-owned petroleum corporation in the West African state of Ivory Coast walked off the job in a three-day strike on Feb. 2. They were protesting layoffs of nearly 10 percent of the firm’s employees.

Some accounts of the situation say that as many as 200 workers could lose their jobs, out of a workforce of approximately 600. Company officials are offering a severance package that has been rejected by the union.

Reuters reported, “Petroci offered to pay 10 dismissed managers six months of their salaries while the 40 other laid-off employees were to receive eight months. However, a member of the company’s management said the union was demanding 20 months.” (Feb. 5)

“That’s not possible. We don’t have all that money,” an unnamed company official said.

Workers at Petroci announced Feb. 5, after three days of striking, that they would extend the strike another 72 hours in the hope that their demands would be met.

Petroci is a relatively small oil and natural gas producer but controls 36 percent of domestic petroleum distribution in French-speaking West Africa’s largest economy, along with 30 filling stations. It has joint operations with companies engaged in production and exploration operations and manages a base for logistical support for offshore production blocks. The union, SYNTEPCI, represents workers at 16 companies in addition to Petroci.

Efforts are underway by the union leadership to win the cooperation of workers at other companies who could be called upon to strike out of solidarity. This includes workers at the state-owned Societe Ivoirienne de Raffinage, which manages a refinery with the production capacity of 65,000 barrels per day.

Ivory Coast is suffering from the overproduction of oil globally, which is also impacting other developing states in Africa. After substantial direct foreign investment in the oil and natural gas exploration industries, prices have drastically declined, driving down currency values and bond prices in so-called emerging economies not only on the continent but in the Middle East, Asia and Latin America as well.

In the aftermath of the war of regime-change led by France resulting in the overthrow of former President Dr. Laurent Gbagbo and the installation of the current leader, Alassane Ouattara, transnational oil and gas firms began to increase their investment in production. Ouattara is a former functionary of the International Monetary Fund based in Washington, D.C.

This oil workers’ strike is taking place while former left-leaning President Laurent Gbagbo and youth leader Charles Ble Goude are standing trial in the Netherlands at the pro-imperialist International Criminal Court at The Hague.

Gbagbo and Goude have pleaded not guilty to a host of charges which their defense lawyers say have no merit. The leader of the Popular Front of Ivory Coast (FPI) is the highest-ranking government official ever tried by the ICC.

Illustrating the incompetency of the ICC, the names of witnesses who may be called against Gbagbo were inadvertently released to the press, further complicating the political atmosphere surrounding the legal proceedings. The ICC claims that the protection of witnesses’ identities is essential to their prosecutorial conduct.

An article in Daily Nation noted, “[A] closed session of Gbagbo’s … trial was mistakenly broadcast on the court’s public channel;” the incident “will be investigated,” according to the ICC’s director of public information. (Feb. 7)

The article continued, “A clip of the hearing, widely circulated on social media … shows ICC Judge Cuno Tarfusser calling for the trial to go into a closed session at the request of lead prosecutor Eric MacDonald. But the microphones are left open and MacDonald can be heard saying that he wanted to raise the issue of witness protection.”

On Feb. 3, the prosecution’s initial witness, labelled “P547,” accidentally blurted out his name. Tarfusser suspended proceedings and ordered reporters not to use the witness’s name. Journalists were then required to give their names to ICC security agents.

Reeling from pressure generated from inside the African Union and other organizations, Western-installed President Ouatarra told French President François Hollande that Ivory Coast was now capable of handling its own legal issues.

During the course of a brief visit to Paris, Ouattara told Hollande, “The ICC has played the role it should. Coming out of the electoral crisis, we did not have justice, the country was completely in tatters. Now we have a justice system that is operational and has begun to judge everyone without exception.” (africanews.com, Feb. 5)

Nonetheless, Simone Gbagbo, spouse of the former president, was sentenced to 20 years in prison under biased and legally questionable conditions. The former first lady is a political figure in her own right, having served as president of the Parliamentary Group for the FPI.

Simone Gbagbo was arrested alongside the former president in April 2011. She was tried and convicted of “undermining state security” for defending the country against the Western-backed seizure of power.

Although Ivory Coast has been lauded for its foreign direct investment from the capitalist states, economic problems persist, prompting workers’ unrest. The trial of Gbagbo could destabilize the state since the former president maintains broad support inside the country.