United Steelworkers Local 8751, the Boston School Bus Drivers Union, continues to fight a two-year battle to get four of its elected leaders reinstated after being fired. At the same time, the union is fighting for a just contract, the resolution of 700-plus grievances and many unfair labor practices, and safe transit for the city’s children, their precious cargo.

Yet the union never fails to stand up when racism raises its ugly head. Workers World spoke to two union stalwarts, Bobby Traynham and Samir Stanley, whose “solidarity in action” included representing Local 8751 at the October “Justice Or Else” march. Stanley is a 32-year driver, multiterm chief steward and Team Solidarity member of the executive board serving on the accident review committee. Traynham is a rank-and-file Team Solidarity leader with 37 years behind the wheel and a long-time member of Workers World Party.

Workers World: What does the word “solidarity” mean to you? 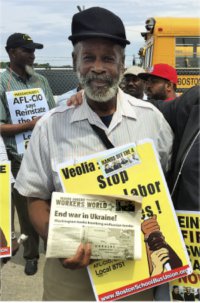 Bobby Traynham: It means that you support a person if they are having a hard time. Solidarity forever, that’s what I say. You make workers know that and make them feel better. We had a sound truck going around the neighborhood for City Councillor Charles Yancey. We knew he was having a hard time because the bourgeoisie was giving a lot of money to [his opponent] Ms. Campbell. [The bosses’ favorite won the election.] We gave a lot of support to Chuck Turner [a former city councillor who served time on trumped-up federal charges]. He was under the gun. He didn’t have no solidarity in City Hall; they voted against him. Yancey was the only one who stuck with Chuck. The local was behind him. I was in court every day. Now Chuck’s in the forefront of the negotiations for the fired drivers. 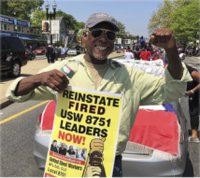 Samir Stanley: That’s a good question. I would be in solidarity with probably any group that believes in fairness and justice and equality for humanity. Local 8751 shows solidarity for most organizations that support equality, anti-racism, housing, and for those that don’t have a voice, and labor period. One of the main things is better wages and jobs for workers. McDonald’s ­workers walked out for better wages. That is one of the most consistent things that we have fought for.

Stanley: I think that is easy, because they support what “Justice Or Else” stands for, which is equality and justice for those who don’t have it.

I was at the original [Million Man March], so for me the experience was overwhelming. You have to be a Black American to understand what it feels like to be among a group like yourselves that has been portrayed so negatively: your culture, your food, your education, etc. So to not see any of those things at all at a massive rally is a thing to behold. The Million Man March was the highlight of my life. The rally this year was similar to but not equal to that experience. It was like coming home again.

To deal with the problem you have to deal with the root. I feel that this country has a problem: that is racism. It might not be at the top of your agenda, but for a person that’s dealing with it, it’s at the top of the list. When it comes to the root, the inception of America, you have the taking of the land of the original people that were here. Then you have the immigrants coming onto the land. Then you have the involuntary immigrants, the Black people. If those three entities are not addressed, then the fight against racism is not a real fight. That event, that shows Black people in a positive light, was not aired. Events like this show that the fight on racism is far from being done.

Traynham: I wanted to be there. This is the 20th anniversary of the Million Man March. I went 20 years ago. That was the highlight of my life to see one million Black men. There was a whole lot of youth at this year’s one. I met kids from Texas and I talked with them about 20 years ago. It was good to see young people watch our backs. One of the biggest things was the Native Americans and they highlighted them speaking about their struggle. Also parents talked about their kids being shot down by police. I expected more from the Nation of Islam about boycotting the holidays. I was disappointed that Minister Farrakhan pulled back. He did not clarify what the “else” was in “Justice or Else.”

WW: Why did the drivers attend the WW conference?

Traynham: I think most of the drivers went because they love Workers World. They talked about it to other workers when they got back. All the workers were asking what happened. For three or four days we explained. Freeport Yard [one of four bus yards where Traynham works] supports the party. The thing we got to do, we got to recruit. After the contract is settled we can recruit.

I was born in a place in West Virginia they call Redstar. So I was made a communist from the beginning. I don’t know what I’d be doing if I had not entered Workers World. I took to it right away. When I met the party, I got rid of all my vices, drinking beer and whisky and smoking. The party is probably why I am still alive. I am going to pay a debt to Workers World as long as I live. That’s what I’m doing.