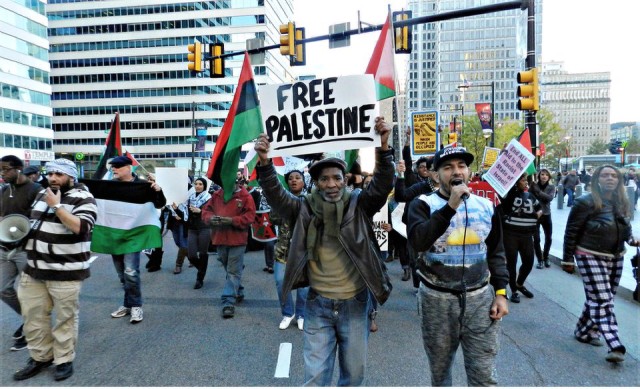 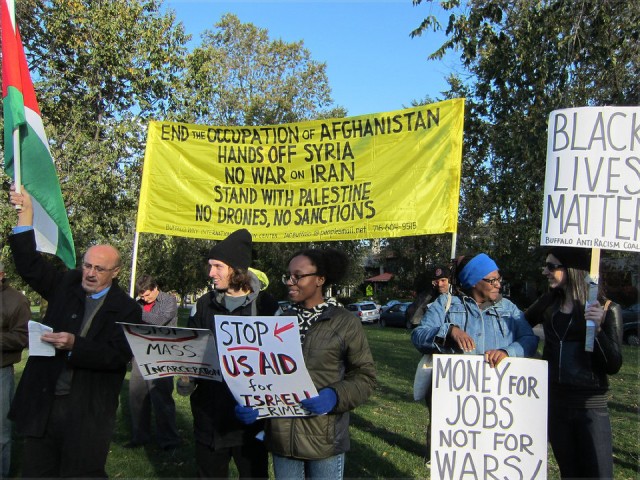 Students and community activists rallied at Philadelphia’s City Hall in support of justice for Palestine on Oct. 30. Led by Palestinian youth chanting, “No more deaths! No more lies! Israel out of Palestine!” the gathering took the streets and marched through rush-hour traffic.  Many pedestrians, especially immigrants and people of color, took cellphone photos and videos, and some joined the march.  A significant portion of the demonstrators were from the Black community, including members of the Coalition for Racial, Economic and Legal Justice.  The protest ended with a speakout at the Israeli Consulate.  The energetic event was organized by Philly Boycott, Divestment and Sanctions;  the International Action Center; and Temple Students for Justice in Palestine.

The same day in Buffalo, N.Y., a protest opposing the U.S./Israeli occupation of Palestine connected global U.S. wars to the war on Black and Brown youth in the U.S. by police. The demonstration, called by Students for Revolution, demanded an end to the illegal, U.S.-sponsored Israeli occupation of Palestine along with all U.S. wars, including in Afghanistan, Iraq, Syria and Yemen. Speakers made it clear that the struggle and resistance shown by Palestinian youth in the West Bank and Gaza against Israel’s genocidal occupation are strongly connected with the Black Lives Matter movement in the U.S. as it stands up against racist police brutality and occupation. Solidarity between these movements builds important anti-racist unity in confronting U.S. wars both here and around the world.