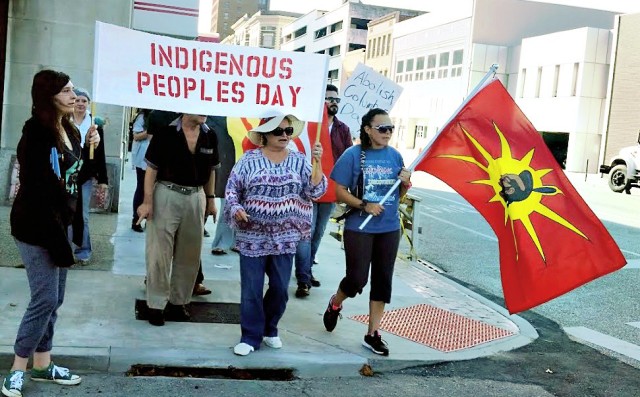 Oct. 12 — Supporters of renaming today’s holiday from “Columbus Day” to “Indigenous Peoples’ Day” gathered in Huntington, W.Va., for a march through downtown to a vigil on the campus of Marshall University. Marchers held signs denouncing Christopher Columbus as “a genocidal rapist” who enslaved and killed the Taíno and Arawak people of Hispaniola.

Some signs made links to other resistance struggles around the world such as that in Palestine. Others read “Smash white supremacy!” and “Support Native resistance!” Flags of the Mohawk people and the American Indian Movement were also flown. Activists from the MU Native American Students Association; the Appalachian Left; Fight Imperialism, Stand Together (FIST); Workers World Party; and the MU Muslim Student Association all took part in the event.

Interviewed at the vigil, the president of the MU Native American Students Association, Genenahgehneh Ohihkdahdet of the Haudenosaunee, told Workers World, “It is important to pay respect to the victims of conquest and genocide that has occurred on this continent for over 500 years.” She also stressed remembering the victims of residential boarding schools, which were designed to force captive Native children to adopt Christianity and Euro-American customs in place of their own identity and culture. To honor these victims, Ohihkdahdet conducted a traditional ceremony using sage and sacred tobacco and sang songs to close the event.