U.S.-NATO plans to overturn the Syrian government and recognize a dysfunctional regime of imperialist collaborators have suffered a serious setback.

In addition, Israel, Qatar, United Arab Emirates, Saudi Arabia, Jordan, Bahrain and Australia have also used their aircraft to bomb inside Syria. All these countries wring their hands and express frustration that the Islamic State has continued to grow. All are determined to overthrow the government of Syria. Meanwhile, Syria’s people have been devastated by this war imposed from the outside, with 12 million of Syria’s 23 million people displaced and homeless. 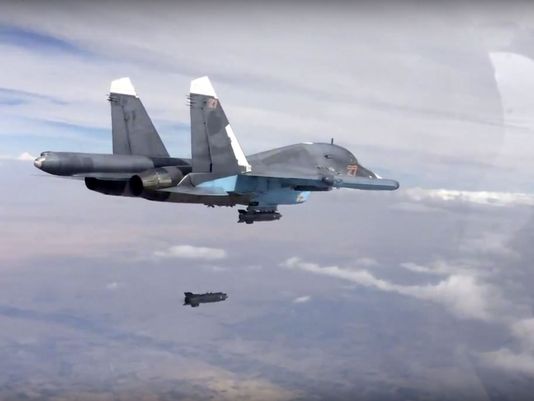 A no-fly zone and ground actions were under active discussion in almost every country, but both have faced intense opposition in imperialist Europe and the U.S.

However, the destruction is just beginning. Combatants from 80 countries, including mercenaries, organized into 1,000 armed opposition groups and comprising more than 100,000 reactionary and fanatical fighters, are operating in Syria.

That Saudi Arabian money equips and pays them is hardly a secret. Units operate openly from bases in Turkey and Jordan. Truck convoys of hundreds of trucks resupply these units. Yet despite all this assistance over more than four years, these mercenary forces have failed to overturn the Syrian government.

The no-fly zones under discussion were intended to create an area of safety for a U.S.-organized opposition army to build strength. Tens of thousands of Syrian refugees would be dumped in this “Protected Zone.”

In 2011, the Pentagon war machine and its NATO co-conspirators declared a no-fly zone in Libya in order to authorize seven months of relentless bombing of that country, leading to the brutal overthrow of the Libyan government. They’ve been unable to repeat this in Syria.

In the midst of all this outside intervention, Russia and Iran’s intervention into the war and Russia’s air strikes on the Islamic State have suddenly raised wild protest and screams among the imperialists. This is because both Russia and Iran, along with Lebanon’s Hezbollah forces, aim to defend Syria’s sovereignty, not to overthrow the Bashar al-Assad government. Russia’s entrance into the war has closed off Western plans to create a no-fly zone in Syria.

An Oct. 8 article in the New York Times exposed Washington and EU thinking behind the massive publicity given to the refugee crisis and now their enormous frustration with Russia’s assistance to Syria. “First, [Russian President Putin] has closed off Western options that might have threatened the current regime in Damascus, the Syrian capital. This summer’s large flow of refugees stemming from the Syrian conflict had begun to focus European minds on how to resolve the underlying problem. Britain, France, Jordan, Turkey and Washington had begun at long last to talk seriously about creating so-called no-fly zones over Syria.

“Those zones were intended to create areas of safety inside Syria for opposition forces and for thousands of displaced people, reducing the refugee flow. The tactic was intended to prevent the Syrian air force from attacking rebels and their supporters opposed to President Bashar al-Assad, who was steadily losing ground as his officials admitted to shortages of manpower.

“The presence of sophisticated Russian warplanes and Russian personnel on the ground makes it almost impossible for the United States and its allies to risk such a no-fly zone.”

What could possibly be clearer?

This article exposes Washington’s cynical thinking and NATO’s military plans. This also puts in perspective the barrage of corporate media that was suddenly so overwhelmingly sympathetic to the wave of desperate refugees. The flow of refugees was intended to break down the resistance in Europe and promote NATO involvement.

The United Nations’ drastic cut-off in meager food assistance to war refugees in camps in Jordan, Turkey, Iraq and Syria also pushed desperate people into the dangerous trek to Europe. The U.N. agency needed a mere $236 million to keep the program funded through November, but didn’t get it. According to NationalPriorities.org, the U.S. government has spent that much on wars in Iraq, Afghanistan and Syria every 28 hours since 2001.

Was this preventable cut-off in food to refugees also intended to provoke migration in order to “focus European minds … at long last to talk seriously about creating so-called no-fly zones over Syria”?

Despite the words of U.S. diplomats urging cooperation with Russian and Iranian forces, any cooperation is unlikely, as the goals of the two sides are diametrically opposed. The U.S. and Western forces are still determined to pursue “regime change” in Syria; Russia and Iran know that their own sovereignty and the stability of the entire region are connected to Syria’s ability to defend itself from colonial-style subjugation.

The U.S. response has been to increase the shipment of military equipment to the various reactionary forces and escalate the growing confrontation.

The only way to resolve this conflict is for the U.S., NATO — including Turkey — and the Gulf monarchies to get out of Syria and stay out!