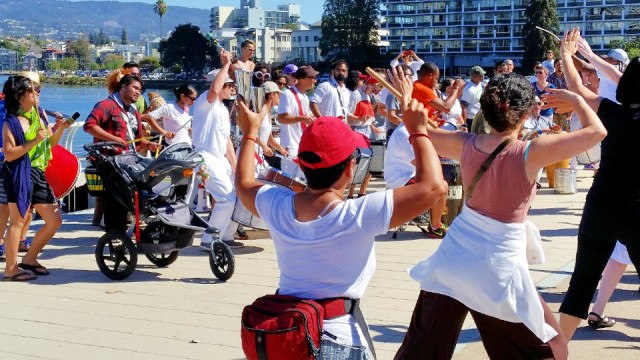 A multicultural drumming circle was held at Lake Merritt on Oct. 11. “Preserve the Soul of Oakland” was called in response to the Oakland Police Department’s handling of a complaint on Sept. 27 by a disgruntled new resident to the Lake Merritt area of the city.

The area has experienced great residential turnover with rising rents, part of the gentrification of Oakland. This new resident physically attempted to grab the drumsticks out of the hands of Theo Williams, artistic director of SambaFunk! As a result of the ensuing melee, 13 OPD officers were called to the scene and two drummers were issued citations.

The community was enraged. Drumming circles were held on Oct. 6, the night of the City Council meeting, in front of City Hall. Additional drumming circles happened at other times. The Parks and Recreation Department was forced to remove signs around the lake stating that musical instruments were prohibited. The signs quoted an ordinance that didn’t even exist.

The Oct. 11 event, led by Williams, included Korean, First Nation, Brazilian and Haitian drummers. Oakland City Councilmembers Abel Guillén and Desley Brooks addressed the crowd. Even Oakland’s Black churches around the lake have been harassed with noise complaints as a result of gentrification.

According to the Oct. 9 Post News Group, “Post publisher Paul Cobb spoke about the complaints that Pleasant Grove has been receiving at last week’s City Council meeting, reminding council members that jubilant worshipping and celebration are a vital part of the Black church experience and must not be suppressed. ‘Black churches matter. We will not allow gentrifiers to come into our community and tell us how to worship God,’ said Cobb.”