On Aug. 4 the Michigan Court of Appeals denied bond to the Rev. Edward Pinkney, pending appeal. Two of the three-judge panel ruled against the bond request.

The decision was issued as a one-sentence response to a motion filed by Pinkney’s attorney, Tim Holloway, which included a thorough brief spanning 42 pages. 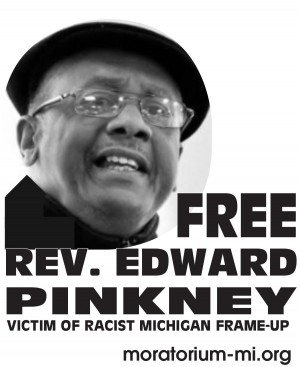 Pinkney is from the small city of Benton Harbor, Mich., where 89 percent of the people are African Americans and almost half live below the poverty line. Benton Harbor is in Berrien County, which is 80 percent white and more affluent. Pinkney has long been a thorn in the side of the power structure there.

In 2014 he was charged with altering five dates on a recall petition against the mayor of Benton Harbor. For this alleged “crime,” Pinkney was tried and convicted before a white judge, white prosecutor and all-white jury. On Dec. 15, he was sentenced to 2.5 to 10 years in prison.

The jury had been told that “You do not need evidence to convict Rev. Pinkney” and the judge had said he was “going to make an example” of him.

Holloway’s motion covered many reasons why Pinkney should be released on bond now, showing that the Black reverend will most probably win his appeal, when it is finally heard in the coming months. In addition to Pinkney’s community service and the nonviolent nature of the charges, the motion described the blatant constitutional violations of his rights.

Prosecutor Michael J. Sepic hammered all Pinkney’s witnesses, demanding to know who chaired meetings, who spoke at rallies and who was the press spokesperson for the recall campaign. These constitutionally protected acts relating to freedom of speech and assembly were used to prejudice the jury against Pinkney. Finally, the only evidence offered against the reverend boiled down to the fact that he led the recall campaign and therefore should be presumed to be the guilty party.

Sepic had made only one argument in answer to the defendant’s exhaustive brief. He argued that the Court of Appeals could not grant bond pending appeal unless the lower court had “abused its discretion in denying bond.”

On Aug. 11 attorney Holloway filed a motion for reconsideration to the Court of Appeals.

Since no explanation by the Appeals Court accompanied its denial, Holloway’s motion argued that “a palpable error occurred if the Court of Appeals accepted the prosecution’s argument.…” Holloway cited case law that the Appeals Court had its “own independent judgment and the exercise of its own discretion as to whether bond should be granted” and that “the failure to exercise discretion when called on to do so constitutes an abdication and hence an abuse of discretion” by the Court of Appeals.

On Aug. 10 Pinkney made a phone call from Lakeland Correctional Facility to a joint meeting in Detroit of the Moratorium NOW Coalition and the Michigan Emergency Committee Against War & Injustice. He thanked all his supporters for their hard work on his behalf.

While disappointed at the Aug. 4 ruling, he vowed to continue the fight. At his urging, plans are underway to organize a protest and press conference outside the Michigan Court of Appeals in Grand Rapids. A tentative date of Aug. 26 at noon has been set for the protest at the State Office Building, 305 Ottawa N.W., Grand Rapids, Mich. For more information on upcoming events, see Moratorium-Mi.org. For background on the decade-long persecution of this African-American community leader, go to workers.org and search archives for “Pinkney.”