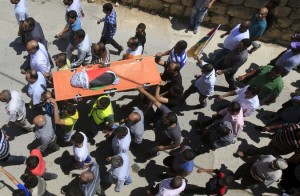 The July 31 Zionist terror attack on the Dawabsheh family in the Palestinian village of Duma resulted in the burning to death of 18-month-old Ali Saad and left her parents, Sa’ad and Reham, and 4-year-old brother Ahmad in critical condition. Their home had been fire-bombed in the middle of the night.

This was not an unusual incident carried out by unknown individuals.  Genocidal crimes like this against unarmed Palestinian civilians have always been used by the Zionists during their over 100-year occupation of Palestine in order to try to break the resistance of the Palestinian people and their allies in Egypt, Lebanon and Syria.

According to the Alternative Information Center, an anti-Zionist “joint Palestinian-Israeli” online political/media project, “The system supporting Jewish terror gangs includes not only isolated messianic groups, but rabbis, educators and even security coordinators of settlements who know members of these gangs, as well as a wide swathe of supporters who remain silent out of solidarity. Condemnations by these people, and also by Knesset [Israeli Parliament] members who support transfer and apartheid, are an attempt to gain points and create an artificial space between them and the murderers.” (alternativenews.org, Aug. 3)

The three following statements were issued on July 31 and Aug. 1 by the PFLP. Go to pflp.ps/english/

The Popular Front for the Liberation of Palestine denounced the horrific crime by settlers, burning Palestinian homes in Duma, near Nablus and killing the baby Ali Saad Dawabsheh, 1 1/2 years old, and gravely injuring his mother, father and brother. The Netanyahu government of terrorists and murderers bears the responsibility for this crime of unspeakable cruelty, which requires all of us to escalate the resistance and declare war on the settlers and their colonies.

Such heinous crimes against children are an integral part of the ongoing Zionist terror against our people which has not stopped for over 67 years, and massacres are part of the strategy of the Zionist settlers in their war against the Palestinian people and reflect the nature of the Zionist state in Palestine.

The Front urged the Palestinian masses to express their rage and respond to this crime at all levels, escalating the resistance to confront the occupation and the settlers, through collective confrontation and organization, and the formation of popular committees in villages, refugee camps and cities in the West Bank to deal with the settlers and their crimes, noting that it is clear that the security apparatus of the Palestinian Authority has failed utterly to protect our people from the settlers and their constant violence.

The Front also demanded that Palestinian officials declare a state of emergency and urgent action to respond to this brutal murder and the escalating crimes against our people and reiterated its demand that the Palestinian Authority must end security coordination with the occupation, particularly after the targeting and burning of children, and go to the international community to delegitimize the occupation state and pursue the political, military and settler leaders in international courts for their crimes against our people.

The answer to the crimes of the occupation is held not only by Palestinians but requires Palestinian and Arab resistance, said Comrade Abu Ahmad Fuad, Deputy General Secretary of the Popular Front for the Liberation of Palestine, in a television interview with Al-Mayadeen TV on July 31.

He denounced the role of the United States and its strategic partnership with the Zionist state, highlighting the hypocritical statements denouncing the settler murder of 18-month-old Ali Dawabsheh while providing billions of dollars in military aid to the Zionist military to kill Palestinian children, and using the veto in the United Nations to prevent any accountability for Zionist political and military war criminals.

In addition, Fuad said, “we must not allow the enemy to single out the West Bank, or Gaza, or Lebanon, or our people in Palestine ‘48, while the Arab world remain spectators; our responsibility is not to protect this or that region, but to stand together collectively to defend all of our people, in Gaza, the West Bank, Occupied Palestine ’48, and all of the Palestinian and Arab people, wherever they are.”

He denounced the role of the Palestinian Authority and Palestinian official positions as insufficient, noting that existing Palestinian consensus decisions have not been implemented at all, emphasizing the need to immediately end security coordination and sever the relationship with the criminal enemy. “The responsibility for this crime does not lie with the settlers only, nor with individuals, but with the entire state of the occupation and the Zionist project, that is based on the settler colonial conquest of our homeland,” said Fuad.

He reiterated his call for the abolition of the Oslo Accords, noting that they ended in reality long ago. He stressed that the logic of negotiations and bargaining has been deeply destructive to the Palestinian cause, to Palestinian refugees’ right of return and to holding the occupation accountable.

Fuad urged all to name streets and squares after the martyr Ali Dawabsheh, everywhere, so that his name remains a witness to the fascist, racist crimes of the enemy, and that the compass of Arab countries must be re-pointed towards Ali Dawabsheh, and toward Palestine.

The Popular Front for the Liberation of Palestine, on behalf of its General Secretary, Comrade Ahmad Sa’adat, Deputy General Secretary Comrade Abu Ahmad Fuad, and all of the cadres of the Front, deeply mourns the martyr, Comrade Laith al-Khalidi, son of Comrade Fadel al-Khalidi, murdered at dawn on Saturday, August 1, killed by Zionist forces as he protested near the Atara checkpoint against the settler attack and killing of 18-month-old child Ali Dawabsheh in Duma near Nablus.

The Front emphasizes that the blood of our martyrs shall not be shed in vain. Glory to the martyrs, freedom for the prisoners of freedom, and healing for the wounded. Victory is inevitable – no voice is louder than the voice of resistance.