As we go to press, Sandra Bland’s funeral on July 25 was attended by hundreds of people in Lisle, Ill., a Chicago suburb.  In her remarks, Bland’s mother, Geneva Reed-Veal, urged people to continue to demand justice for her daughter on social media.

Since the death of Sandra Bland of Chicago on July 13 in Waller County, Texas, there have been countless actions of people angered, outraged and just sad over her death.

The most recent was a July 26 protest outside the home of Texas trooper Brian Encinia, who arrested Bland. This brought out the cops in full force, looking like an occupying army. 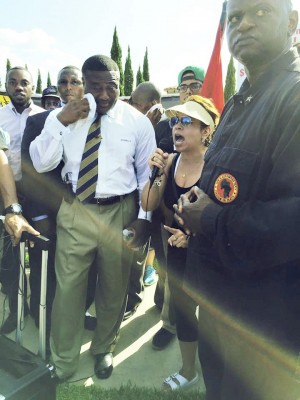 Harris County (Houston) Sheriff’s Department’s vehicles filled the whole parking lot adjacent to Encinia’s apartment complex. Texas State Police, the Harris County Sheriff’s Office, the West I-10 Fire Department and several other agencies set up a command post in a nearby parking lot. They came with riot gear and a mass casualty evacuation ambulance. Sheriffs mounted on horses awaited the militant contingent that caravaned into the Houston suburb of Katy where Encinia lives. It was only after the demonstration that activists found out that Encinia had moved three days earlier, supposedly for his own safety.

African-American activists led this march, which concluded with a rally with community activists speaking out. Several student leaders from Texas Southern University, a historically Black university in Houston, demanded answers regarding Bland’s death. Minister Quanell X chaired the rally and challenged the dozens of cops on horses to deal with the many Black men who had gathered. “Your state trooper assaulted a Black woman who was alone and now she is dead. The men of the Black community are saying to this racist white man who mistreated sister Sandra Bland: ‘You (were) going to light her up? Now, let’s see if you light us all up when we come today.’”

Liliana Castrillón, speaking for the Texas Death Penalty Abolition Movement in Spanish, said: “Some of you police here today may think you are good cops. But there are no good cops if you don’t speak out against the killer cops. You are just as guilty as the one who caused Sandra Bland to be killed. You are just as guilty as those who have pulled the trigger on young Black and Latino men around Texas and the country.”

Members of local and national churches held a news conference outside the Waller County Jail on July 20 to discuss the case. “We picked this location because it is a crime scene,” said the Rev. Jamal Bryant from the Empowerment Movement of the AME Church. “We are in a state of emergency. Here in Texas we are not afraid of ISIS. We are afraid of the police. We need the immediate intervention of the Department of Justice to take this case, not just out of the county but out of the hands of the state of Texas!”

The National Black United Front held a July 21 demonstration outside the Mickey Leland Federal Building in downtown Houston. Co-chairing the rally was the national chair of NBUF, Kofi Taharka, and Jinaki Muhammad, the vice co-chair of Women’s Affairs for NBUF. They both stressed that there was a systemic problem with cops killing Black people and it was the system that had to be changed.

A day later, hundreds of protesters gathered in Houston’s largest park after the heat dropped below 90 degrees and marched and rallied until after dark. The multinational crowd was united in their demand that the questions surrounding Bland’s death be answered.

Several vigils, marches and prayer gatherings have been held in Prairie View on the campus of Prairie View A&M University, which is in Waller County. PVAMU students have been quite vocal about Bland, who was an alumna of their school. The Hope AME Church held a rally July 26 after hundreds of students marched through the campus mourning her loss.

Many other activities are scheduled and being planned. The outrage of so many is hotter than the 100-degree temperatures in Texas. Trooper Encinia being placed on desk duty is not the answer that religious leaders, PVAMU students or activists from around the state will accept as a solution.