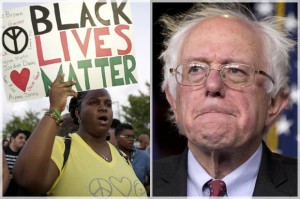 At the Netroots Nation gathering of progressive political activists in Phoenix this mid-July, Vermont Senator Bernie Sanders encountered the first real-time challenge in his new role as aspiring 2016 candidate for president in the Democratic Party. When challenged on stage by representatives of the Black Lives Matter movement to come out clearly against racism and killer cops, Sanders failed miserably.

This took place on July 18, when former Maryland Gov. Martin O’Malley and Sanders were opening a session at the Netroots convention — arguably the largest gathering of progressives in the U.S. — to discuss their candidacies and program. It was just a few days after Sandra Bland had been found asphyxiated in a rural Texas jail, killed for the crime of being Black while driving.

Outraged by this new atrocity, a group of about 50 Black Lives Matter activists, who were also invited to speak at the gathering, interrupted O’Malley and demanded the candidates recognize the Black women victims of police racist terror.

Surprised, O’Malley blurted out, “Black lives matter. White lives matter. All lives matter.” This was the wrong answer, given who it is that the cops have been shooting, and he was righteously booed.

Sanders, aware of what was happening, was still arrogant enough to give his standard stump speech, which doesn’t mention racism at all. When the BLM people kept interrupting him, Sanders walked out on them.

The BLM people pointed out what should be obvious: Michael Brown of Ferguson, Mo., was on his way to college and Sandra Bland had just landed a good job at a college in Texas. That didn’t stop them from being victims of institutional racism in its crudest form.

Sanders should know that anyone for equality and justice in the United States has to both demand full employment and unite all people against racism. Only by building solidarity of white workers with the anti-racist struggle can you unite all workers and poor to battle the bankers and bosses.

By the next day, O’Malley had apologized, Sanders had added “Black lives matter” to his stump speech and was reading the names of Black victims of police shootings. Hillary Clinton topped them by saying it without benefit of a confrontation. Electoral opportunism had adjusted slightly to the left for the time being, under the impact of the BLM protest. On July 23, Time magazine headlined an article, “#BlackLivesMatter Is Winning the 2016 Democratic Primary.”

But Sanders — assuming he wants to present himself as a candidate of the poor and disadvantaged — had failed his first important test.

As a mayor, congressperson and senator in Vermont — whose population is just over 1 percent African American — Sanders has built a following by supporting government programs that aid poor people. He shows up at every grassroots organization meeting in this small state and has built a loyal electoral following. Sanders identifies as an independent and sometimes has even called himself a “socialist,” although this latter isn’t visible on his “Meet Bernie Sanders” presidential campaign website.

In the Senate he has introduced legislation to put $1 trillion into rebuilding the infrastructure, which will allegedly create 13 million jobs. With Rep. John Conyers (D-MI), he has also proposed the Employ Young Americans Now Act, providing some $5.5 billion to employ 1 million people between the ages of 16 and 24.

In the reactionary cesspool of U.S. capitalist electoral politics, such a program places Sanders to the left of the other corporate candidates in the Democratic Party. Sanders’ campaign rallies have attracted as many as 10,000 people, much larger crowds than those of other candidates, including those of well-funded Hillary Clinton. The very size and energy of these rallies — should they continue — make them an important political phenomenon.

Basically Sanders is part of the Democratic Party, which is pro-capitalist and  pro-banker and supports U.S. military interventions all around the world, from Palestine to Libya to Yugoslavia — as Sanders did. Without his taking a clear anti-racist stand, it should be hard even for political liberals to consider Sanders a progressive alternative to Clinton.

The important question for real socialists and communists is not so much whether the Democratic candidates adopt some mild anti-racist rhetoric. The real question is whether those tens of thousands attracted to Sanders’ economic program are looking for a real alternative. Can they be won away from electoral politics to the independent working-class struggles in the streets?

This means fighting not only for a higher minimum wage, for unions and against U.S.-led imperialist wars. It means joining Black Lives Matters and others in the streets who battle the institutional racism shown by killer cops.