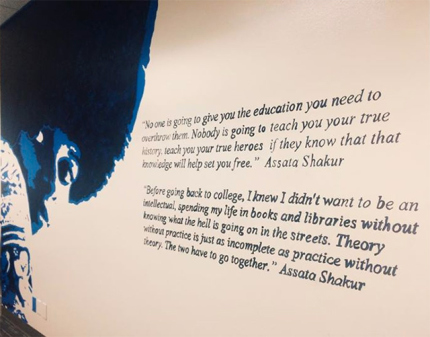 A mural depicting Assata Shakur was removed in May by Marquette University officials after an unrelenting right-wing campaign.

Shakur, a people’s hero and icon of the Black Lives Matter movement, is a former Black Panther falsely accused and convicted of killing a cop in New Jersey in 1973. She escaped prison and has been in exile in Cuba for more than 30 years. The U.S. government has a $2 million bounty out on her.

The mural had been on display in the Alumni Memorial Union near the Marquette Gender and Sexuality Resource Center since March. Shortly after the center posted photos of the mural on its Facebook page, a longtime conservative professor, John McAdams, joined a campaign to have the mural removed. McAdams critiqued the center on his blog for “glorifying a black militant cop killer.”

Under mass student, faculty and community protest, McAdams, an associate professor of political science, was suspended in 2014 for criticizing a graduate student teaching assistant on his blog for how she handled a discussion of gay marriage in her class. He faces possible termination.

Charlie Sykes of the WTMJ radio ­station in Milwaukee, one of the most rabid right-wing media personalities in the United States, helped the campaign to have the mural painted over. Sykes has a daily radio show and a TV program, and edits “Wisconsin Interest,” a magazine from the right-wing Wisconsin Policy Research Institute. This think tank for decades has participated in the destruction of social safety nets such as Aid to Families with Dependent Children, the public school system, and unions and called for the privatization of public ­services.

Despite a mission statement proclaiming that the university encourages a diverse community with “vigorous yet respectful debate,” university spokesperson Brian Dorrington spoke for the Wall Street interests that really run Marquette University, the administrators and their servants, and the cops, on May 20, when he said: “The facts in this instance are clear: A mural of a convicted murderer has no place here.”

Dorrington, of course, said nothing about the innumerable photos, statues and memorabilia littering the Marquette campus and Milwaukee generally that glorify real criminals and murderers such as slave owners, those who’ve committed genocide on Native peoples and plundered whole continents, and the bankers and industrialists responsible for the vicious exploitation, oppression, and murder of workers and oppressed peoples.

Shortly after the mural was removed, the director of the center, Dr. Susannah Bartlow, either resigned under pressure or was fired. There is now a campaign to have her restored to her position. Supporters can email Dr. Michael Lovell, president of Marquette University, at [email protected] or call 414-288-7714. A petition can be found at ipetitions.com.

We will not be silenced!

The Coalition of and for Students of Color at Marquette University issued a statement May 18 after the mural was removed:

“Marquette University does not waste a moment. They painted over a mural with inspirational quotes from activist Assata Shakur without asking anyone (the students) if it was ok the same day of graduation. This is an attempt to erase our voice and silence the people, but we refuse to be silenced MU! Remember you are only functioning because we pay tuition and the Coalition doesn’t believe the mural should have been painted over. This is disrespectful and unacceptable!”

The Gender and Sexuality Resource Center was built after the university administration rescinded a job offer to Jodi O’Brien, a lesbian professor and noted author of gender and sexuality books. The center offers lesbian, gay, bisexual, transgender, and queer students and allies space where they can seek counseling and resources. It is also designed to address issues of sexual violence on campus. The center, under Dr. Bartlow’s leadership since 2012, has also become an oasis for students of color on the majority white and affluent campus.

At a time when every progressive law, every policy, every organization and every resource is under attack by the right wing in Wisconsin, the destruction of the mural must be seen as part of the overall effort by Wall Street and their servants to attempt to smash what’s left of the labor-community movement and to make the state a Jim Crow, low-wage, nonunion, deregulated playground.

Besides the usual seething racism by right-wing forces against people’s warriors such as Shakur and against all people of color, the mural attack is also an attack on Cuba and the burgeoning youth- and student-led Black Lives Matter movement in Wisconsin. These inspiring forces have been connecting race, class, gender, sexuality and other issues such as the environment and supporting unions. The right wing is also attempting to divide white workers from their direly needed allies.

As the students, faculty and their supporters fight back, the two quotes from Shakur on the original mural are giving them inspiration to continue the struggle:

“Before going back to college, I knew I didn’t want to be an intellectual, spending my life in books and libraries without knowing what the hell is going on in the streets. Theory without practice is just as incomplete as practice without theory. The two have to go together.”