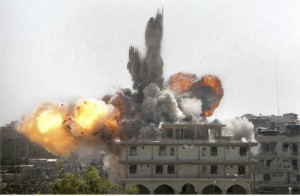 The International Anti-Occupation Network, meeting in Stockholm, Sweden, and Helsinki, Finland, at the end of May, published the following statement on May 24, which they call the Stockholm Appeal:

After decades of sanctions, war and occupation, attempts to dominate and control Iraq continue.

The destruction of the country´s infrastructure, its army and its middle class has left a failed state that leaves its people in social misery and chaos. This has resulted in the collapse of the health and education systems, the weakening of the social fabric and the collective memory and national identity of the Iraqi people. Foreign plans to divide Iraq threaten its very existence as a state.

We reiterate our stand that peace cannot be restored until the underlying causes of the conflict have been dealt with. The Iraqi people continue to resist foreign domination. Only their unity can guarantee the sovereignty of Iraq, and the defeat of terrorism and separatism. Only their efforts can guarantee good relations with all their neighbours based on strict noninterference in each other´s internal affairs. Iraq is not a pawn to be offered in regional or religious conflict. Its sovereignty and independence must be respected.

In the present situation, our efforts should be intensified and coordinated to:

— spread information about the underlying political nature of the conflict and demand an end to all foreign intervention.

— support the efforts of the patriotic forces for unity against sectarianism and terrorism where all Iraqis are treated as citizens of one country rather than members of specific communities.

— mobilize international efforts to alleviate the suffering of the Iraqi people.

— demand an end to the bombing and military intervention in Iraq under the pretext of fighting terrorism.

— demand  justice for the victims and accountability by those responsible for the crimes committed and their responsibility for reparations and the reconstruction of the country. The United Nations must uphold international law.

We call upon all anti-occupation, anti-war and peace-loving people to maintain and continue solidarity with the people of Iraq and their struggle for an independent, unified and nonsectarian Iraq.