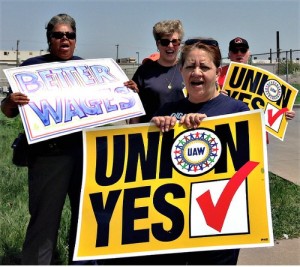 When we think of low-wage workers, it’s often service workers who come to mind — fast food and retail workers in particular. Yet growing numbers of workers are toiling in non-union factories, supplying the auto industry with parts, for little more than minimum wage. Over 70 percent of these workers are unorganized.

These exploited workers are realizing they need a union to boost pay and benefits and improve working conditions. On May 8 dozens of United Auto Workers members came out early in the morning in Detroit with signs to support workers at Sakhti — an upstart parts supplier where workers earn about $9 an hour — who were voting in a union-representation election.

More UAW supporters came back in the afternoon to give the same morale-boosting message to the afternoon shift. One of the chants was “Nine dollars an hour is slave pay, going union is the way!” Most of the workers honked their vehicle horns and gave a “thumbs up” or raised their fists. One courageous worker had a big “Union yes” sign taped to his van.

Sakhti occupies the former General Motors Ternstedt plant, shuttered during the wave of closings in 1987. The plant was the first UAW plant to prove the effectiveness of a work slowdown in the 1930s. At that time some UAW leaders were skeptical that the factory workers, a majority of them women and half of them Polish speaking, could be organized. Stanley Novak, a Polish-born communist organizer popular in the immigrant communities, helped the women win union recognition with this experimental but effective strategy.

Sakhti workers are continuing this legacy of struggle. Despite company intimidation, including firings, by the end of the day the National Labor Relations Board reported that a majority voted for the UAW.