Antiwar actions called Spring Rising, focusing on the 12th anniversary of the criminal U.S. invasion and occupation of Iraq and continued war in Afghanistan, were held in Washington, Los Angeles, San Francisco, Minneapolis and other cities around the United States. Spring Rising was initiated by Cindy Sheehan, anti-war activist and mother of U.S. Army Specialist Casey Sheehan who was killed in Iraq.

In Washington there were four days of actions, including a teach-in, political lobbying and a bus tour of sites of war contractors. The culminating action was on March 21, with a rally of several hundred people, some carrying flag-draped coffins, that gathered in front of the White House and marched to the Capitol, with stops at the offices of defense contractors.

IAC participants came from New York, Philadelphia, Baltimore and Durham, N.C., and linked the continuing wars in Iraq and Afghanistan to the U.S support of armed fascist, right-wing and mercenary forces in Ukraine, Venezuela and Syria, as well as to racist and militarized police repression at home. 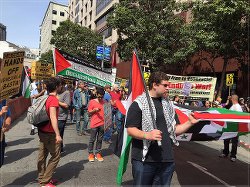 Anti-war demonstrators rallied March 21 at Powell and Market streets in San Francisco and then marched through the downtown area to commemorate the 12th anniversary of the U.S. invasion of Iraq. Demonstrators raised a number of demands: “Stop President Obama’s AUMF” (the proposed new three-year authorization for the use of military force); “End U.S. war and occupation;” “In the Middle East and Central Asia — U.S. out!;” “No to U.S. sanctions and intervention” against Iran, Venezuela, Korea, Cuba, Mexico, Russia, Philippines, Haiti and everywhere; and “Free Palestine — End U.S. Aid to Israel — Fund People’s Needs, Not Endless War.”

The protest was initiated by the Answer Coalition and endorsed by many groups, including the Arab Resource and Organizing Center, the Bay Area Latin America Solidarity Coalition, BAYAN USA, Haiti Action, the Malcolm X Grassroots Movement, the Middle East Children’s Alliance, the Palestine Youth Movement and Workers World Party.

Two actions in central New York protested the anniversary of the 2003 U.S. invasion of Iraq. On the morning of March 19, seven members of the Upstate Coalition to Ground the Drones and End the Wars were arrested after trying to deliver a “citizen’s indictment” for war crimes to Hancock Air Base commanders. Demonstrators also blockaded the main gate of the base with giant books, including “Living under Drones: Death, Injury, and Trauma to Civilians from U.S. Drone Practices in Pakistan,” a report from New York University and Stanford law schools.

Soldiers dragged the books away as “evidence,” opening the possibility that their anti-U.S. war information could be introduced at future activist trials.

“Hellfire” Reaper drones targeting Afghanistan are piloted out of Hancock by soldiers in the 174th Attack Wing of the New York Air National Guard. Drone pilots, sensor operators and maintenance technicians are also trained at the base. Common Dreams estimates that over 2,500 people have been killed by U.S. covert drone attacks in Pakistan, Somalia, Syria and Yemen.  (commondreams.org)

On Feb. 17, the Obama administration okayed the widespread export of U.S. armed drones, as U.S. defense corporations push for bigger profits in the global drone market.

The Upstate Coalition has waged a nonviolent campaign against drone warfare at the base since 2010; there have been over 160 anti-Reaper arrests at Hancock in the last five years. 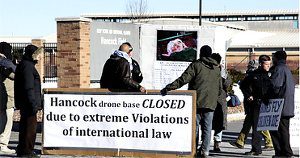 In the afternoon people assembled at a downtown Syracuse, N.Y., street corner and held up signs protesting past and present wars, including Obama’s request for new war powers from Congress. One speaker talked of being in Baghdad in 2003 as part of a U.S. peace delegation and confronting U.S. Marines who entered the city during the U.S. “Shock-and-Awe” offensive.

A Syracuse University student denounced extensive military funding at the school, including the new Institute for National Security and Counterterrorism and the drone-radar defense contractor, Syracuse Research Corporation.

As a steady stream of workers driving home honked in support of the rally, a military veteran spoke of the dreadful effects of war on U.S. soldiers. In addition to post-traumatic stress disorder, he named sexual assaults on 25 percent of women soldiers by other U.S. soldiers and homelessness. Twenty-five percent of homeless people are vets, who are disproportionately people of color.