Ever since the first International Women’s Day was observed in 1911, women all over the world have been commemorating IWD with marches, rallies, speakouts and meetings. Women in the U.S. are no exception. Spurred on by the rising of working women in the fight for $15 an hour and a union, and the upsurge of the national Black Lives Matter movement, IWD events were held from coast to coast over the March 6-8 weekend. A roundup of international activities will be featured in next week’s issue. 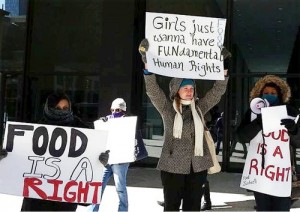 Students, women and supporters braved the cold in Chicago on March 6 to demand “Food as a Human Right.” They marched on the Federal Building to demand an end to food stamp cuts, which were estimated at $5 billion last year, affecting 22 million children. Marchers shouted: “Save the burgers! Save the fries! Make our wages supersized!” in front of two McDonald’s in support of the fight for $15 and unionization.

At the Chicago Board of Trade building and in front of several banks, chants like “Feed the people, not the banks!” expressed people’s demands to hold the food industry accountable for spreading poor health and environmental damage in the interest of making corporate profits.

At a forum held in People’s Temple, speakers — including Kris Hamel from the Detroit Moratorium NOW! Coalition to Stop Foreclosures, Evictions, and Utility Shutoffs — talked about building united struggles to fight against government austerity measures and for the most basic of human rights, like access to quality food, water and health care.

Denzel Baldwin, a McDonald’s worker from Rockford (Ill.) Fight for $15, gave a moving talk about the need for a living wage. A father of two, including a child with a disability, Baldwin spoke about the greed of corporations making huge profits off the backs of exploited workers who should have the right to unionize.

Two daycare workers told how they had not been paid for three months because of recent daycare cuts by the state of Illinois, leaving children and mothers in desperate need. Kyra Blackburn from Malcolm X College expressed fury over the killings of Black youth and supported women leading united fightback struggles.

On March 8, a coalition of Chicago organizations continued the IWD celebration with a lively rally in support of Rasmea Odeh, the Palestinian woman who was a community organizer in Chicago and who is being sentenced on March 12 in Detroit on trumped-up charges of “unlawful procurement of naturalization.”

Solidarity speakers included Mariame Kaba, a leader in the Chicago Black youth movement inspired by the Ferguson, Mo., uprising; performers from a Filipino youth group; and the Chicago Teachers Union. The meeting was endorsed by a coalition of progressive Chicago organizations, including the Committee to Stop FBI Repression, the U.S.-Palestinian Community Network, the Freedom Road Socialist Organization and the Chicago branch of Workers World Party.

Hundreds of women activists gathered in the busy shopping area of Herald Square in Manhattan, N.Y., on March 8 under the political theme of “End State Repression, Police Terror and U.S. Militarization.” Initiated by the International Working Women’s Day Coalition, whose motto is “Every issue is a woman’s issue,” various groups organized contingents with powerful banners and placards. Many were in solidarity with the Black Lives Matter movement that exploded following the grand jury nonindictments of police who murdered Michael Brown in Ferguson, Mo., and Eric Garner in Staten Island, N.Y. There were also signs showing others fatally killed by the police, including Black women like Kyam Livingston and Shantel Davis.

Following the rally, a spirited march surprised shoppers with drumming and chants before stopping in front of a police precinct on West 35th Street near 9th Avenue. Speakers, including Fatin Jarara, Al-Awda Palestine Right to Return Coalition; Asha Cameron, Revolutionary Student Coordinating Committee; Lanai Daniels and Dairanys, Sisters Circle Collective; and Kaylee Knowles, People’s Power Assembly, connected the struggles to free Palestinian political prisoner Rasmea Odeh, cuts in public education and police brutality to the built-in violence of capitalism at home and imperialism abroad. A group from 15 NOW and the PPA participated in an attention-getting mic-check inside a McDonald’s in solidarity with the fast food workers.

While some marchers picketed and held an impromptu speak-out outside Penn Station, others went inside the busy terminal, chanting, “No justice, no peace!  No racist police!” Those lined up to board trains took photos and clapped as the protesters marched through the Amtrak station. 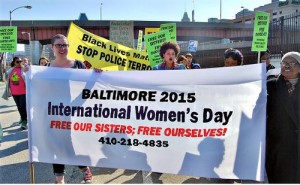 Lenora Knowles began the event with libations to women ancestors; Lynae Pindell spoke on the sometimes forgotten police killings of women of color; and Colleen Davidson, of FIST youth, spoke about the origins of IWD day.

The group held a spirited march to the Women’s Detention Center at East Eager Street and Fallsway. At some points it flowed into the street, with chants like “Boom, boom, up, up with the woman! Boom, boom, down, down with the system!” The protest took over the street in front of the women’s jail, where the group held a speak-out on issues impacting women, including jobs, jails, police terror, low wages, violence and reproductive rights. Lenora Knowles led the group in a rousing rendition of “Rich Man’s House” built around new words, and Sara Benjamin chaired the outdoor rallies.

March organizers were reportedly inspired to march to the women’s jail in part because of the example of the first public IWD activity in many years in New York City in 1970, initiated by the Women of Youth Against War & Fascism, who that year marched to the New York City women’s jail. The Baltimore organizers were equally inspired to show solidarity with women who currently have borne the brunt of the injustice system.

The march ended at the Unitarian Church, where activists were greeted by a dinner prepared by the men of the Peoples Power Assembly and the Baltimore International Workers of the World. After dinner, local women activists were presented with awards. Lynae Pindell, a 23-year-old activist with the PPA, chaired the awards presentation, introducing awardees who spoke about the causes they had embraced.

These activists included Tiffany Beroid, an OUR Walmart worker and founder of “Respect-a-Bump”; high school activist Brenda Villanueva, who participated in the Mexican student movement (she was not able to accept in person because she had to work); Tawanda Jones, an anti-police brutality activist who fought for justice for her brother Tyrone West; Sara Benjamin, a Peoples Power Assembly and Black Lives Matter movement organizer; and Palestinian activist and writer Laila El-Haddad, who is originally from Gaza.

Danielle Longchamps spoke about sexist harassment on the job, and Sharon Black made a proposal accepted by the assembly to deepen the connections of the women and men who gathered to support yearly IWD marches. She also proposed organizing for the next demonstration on April 4 for a $15 minimum wage and justice for low-wage workers. 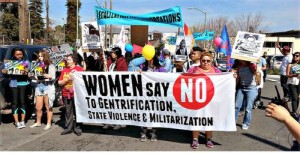 About 300 people marched and rallied in Oakland, Calif., on March 8 in a “Speak out for Justice and Celebrate Women’s Resistance and Power.” The event theme was “Uphold the Legacy and Power of Women’s Resistance Here and Abroad.” Speakers showed the interconnections of many issues, including the fight against gentrification, the struggle to free Rasmea Odeh, the need to defend Korean immigrant Nan Hui against deportation and separation from her young daughter, and the fight for justice for Mario Romero.

The women of Detroit Workers World Party hosted the second annual women’s speakout March 7 to commemorate International Women’s Day. After a delicious dinner, 17 women came to the podium to tell their stories, struggles and why they fight back. They included an African-American city of Detroit retiree whose pension was cut to help pay debt service to the banks during Detroit’s municipal bankruptcy. Another was a young mother who moved into a foreclosed and abandoned home so that she and her five children would have an affordable place to live.

A Jewish activist honored the Palestinian women, children and men who have been killed, displaced and under relentless attack by Israel since its founding in 1948. A young Black woman spoke movingly about the stigmatizing of lesbian, gay, bi, trans and queer youth and told about the many trans women of color who have been killed by bigots in the first two months of 2015.

Women also spoke about the history of International Women’s Day; the cuts to food stamps and the effect on youth and families; environmental issues including global warming and toxic chemicals; the Women’s Emergency Brigade which helped win the Flint sit-down strike in 1937 and forced General Motors to recognize the United Auto Workers union; the right to abortion under siege; and the April 15 “D15” action, part of protests around the U.S. on that day to demand a $15 minimum wage and a union for fast food and other low-wage workers.